Timber in the City

The Association of Collegiate Schools of Architecture (ACSA) is pleased to announce TIMBER IN THE CITY 3: Urban Habitats Competition for the 2018-2019 academic year. The competition is a partnership between the Binational Softwood Lumber Council (BSLC), ACSA and the School of Constructed Environments (SCE) at Parsons School of Design. The program is intended to engage students, working individually or in teams, to imagine the transformation of our existing cities through sustainable buildings from renewable resources, offering expedient affordable construction, innovating with new and traditional wooden materials, and designing healthy living and working environments. This is the third competition in this TIMBER IN THE CITY series, and focuses this year on the interrelationship between housing, healthy, early childhood education and climate change.

The competition challenges participants to re-imagine a vacant waterfront site in Queens, New York, as a vibrant and vanguard model of healthy, biophilic living for the future of the city.

Embracing new structural and ecological possibilities of wood construction, entrants will design a mid-rise, mixed-use complex that includes affordable housing, a large community wellness facility, and an early childhood education center, all interlaced with a new exterior public waterfront space. Entrants are challenged to propose construction systems in scenarios that draw optimally on the performance characteristics of not one but a variety of wood technologies, and are encouraged to think about the site as a testing ground for socially, materially, and environmentally progressive and innovative models of sustainable urban living.

The programs for this mixed-use development are composed to challenge students and educators to think creatively and critically about the way in which choices about building materials, and the interrelationship of interior space and the exterior environments frame long- term consequences for the health of urban environments. Housing is the largest component of the competition program and presents an opportunity to look closely at the way timber construction can be used effectively in creating buildings based on smaller cellular units. A community wellness and sports facility complements the housing, and offers larger community and collective spaces that will require larger structural spans. An early childhood education center, for children from 6 weeks to 5 years old, calls attention to the critical role these institutions play in the long-term vitality and development of a community.

This third edition of the Timber in the City considers a site in Queens, just south of the Queensborough/Ed Koch Bridge. Overlooking the east river, with views to Roosevelt Island and Manhattan, the vacant site can be understood as a segment within a larger chain of mixed-use waterfront development in the Borough, including the Hunters Point and Annabel Basin projects underway to the south, and stretching south to Brooklyn and north to the Bronx. These new approaches to affordable housing stands in contrast to the NYCHA Queensbridge Housing development to the north. Constructed in 1939, it is one of the largest public housing complex in North America. Along with the adjacent Queensbridge Park, it reflects nearly century-old ideals of living, construction, affordable housing, and landscape which will be reconsidered and re-imagined in this competition. This site has a unique mixed-use zoning designation and an ample allowable FAR, which the competition program does not maximize. Instead, it is to be considered the first of a phased development of this significant site. Competitors are required to anticipate the future phased build-out of this site to utilize the full FAR as a condition of the competition design.

The competition challenges participants to interpret, invent, and deploy numerous methods of building systems, with a focus on innovations in wood design on a real site. For thousands of years, solid wood has been used as a building material. Modern timber products and systems have greatly expanded the potential uses of this historic material. Timber is an ideal green building material: it is well suited for a broad range of structural and aesthetic applications, it offers economical construction and high performance characteristics in strength and energy efficiency, and wood is an economic driver to maintain forests and protect jobs in rural communities.

Winning students and their faculty sponsors, will receive cash prizes totaling $40,000. The design jury will meet in the summer of 2019 to select winning projects and honorable mentions. Winners and their faculty sponsors will be notified of the competition results directly. A list of winning projects will be posted on the ACSA website (www.acsa-arch.org).

Criteria for the judging of submissions will include: timber/wood as the primary structural material, creative and innovative use of timber/ wood in the design solution, successful response of the design to its surrounding context, the creative and clear approaches to designing a healthy urban mixed-use environment with timber as a central material, successful response to basic architectural concepts such as human activity needs, structural integrity, and coherence of architectural vocabulary. 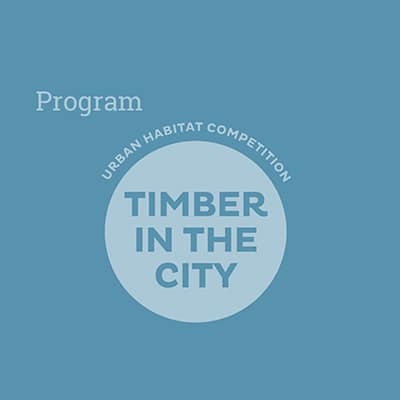