The International Union of Architects, UIA, the Institute of Architects of Brazil, IAB, and the UIA2020RIO Executive Committee, in agreement with their institutional partners and other stakeholders, following the recommendations of national public authorities, inform that the 27th World Congress of Architects / Expo has been postponed by one year to 18-22 July 2021, due to the COVID-19 pandemic. 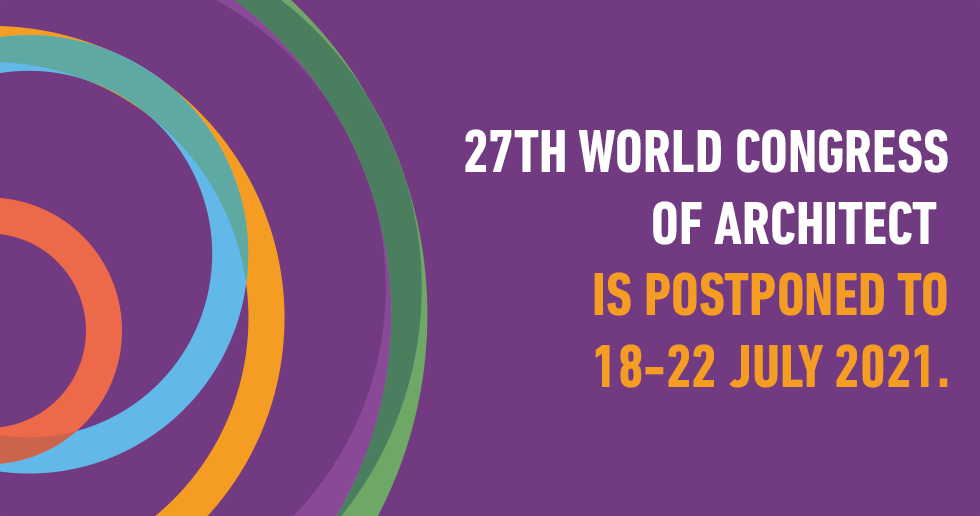 ACSA has partnered with the International Union of Architects (UIA) on the 27th World Congress of Architects UIA 2020 RIO being held in Rio de Janeiro, which had been postponed to 18-22 JULY 2021. ACSA will be managing the double-blind peer review process for the Congress.

Architects from all continents, urban thinkers, researchers, university students, builders, society and youth movements, technology and systems companies, academic and multilateral institutions, political and country representations, under the unique Rio scenario, are invited to compare experiences related to the construction of the space of social life. With architecture and urbanism as catalysts, we will debate and formulate proposals for the future of cities.

All the worlds. Just one world. Architecture 21

The theme of the 27th World Congress of the International Union of Architects – UIA2020RIO highlights the urban reality of the contemporary world and involves the role of Architecture. It expresses the diversity and multiplicity of urban forms and modes of production of cities.

Multiple cities, full of contrasts, possibilities, inequalities and right answers. There are many urban worlds requiring specific attention, for which Architecture, in its large dimension, has responsibility never too exaggerated. Our actions of planning, design and construction are of interest to all these worlds and to each one have repercussions.

In Brazil, of 200 million inhabitants, 175 million live in cities. It is a proportion that is manifested in most of the continents. The notion of finitude imposes new challenges on the search for preservation and the sustainability of environmental conditions and on urban cultural and spatial conditions.

We all live in one era. Just one world. Communications make us instantaneous and the unfolding reaches all.

In this context, architecture enriches its experience without dogmas. It stimulates the diversity of modes of intervention, the symbiosis between popular culture and that of the architects, the production of the new city of tolerance and recognition of countless contributions and preexistences. Cities that can be the desired answers to the century of the urban, respect for the environment and the needs of future generations.

Brazil has twenty metropolis and two megacities interconnected territorially. It presents city-architectures that illustrate the myriad possibilities and the enormous challenges of 21st century architecture. Slum poverty and slum dynamism architectures; the rich enclaves and the poverty of the enclaves; the public space of interaction and the space of monofunctionalism. New cities, old cities asking for our reflection of architects, thinkers of the urban, of agents producing cities, of citizens.

The intense asymmetric flows that characterize the city today are manifested in processes such as the uneven circulation and location of investments and services, the vertigo of the transit of images, products and information, and in the new social frontiers. Real estate production remains focused on capital accumulation. Environmental disasters, the depletion of natural resources, the swelling and shrinking of cities collaborate in the increase of social conflicts, exacerbating inequalities and fragilities.

The speed and scale of the changes accentuate the sense of loss of local cultural values and traditions and weaken resilience. Protectionist economic measures, exacerbated nationalisms, and struggles between ethnic groups set the clock back on history, counteracting universalism, tolerance and efforts for cross-cultural and transnational dialogues.

The globalization of the problems is accompanied by the internationalization of the professional performance. Architects and town planners working simultaneously in different countries disseminate concepts, constructive technologies and design strategies. Equal appearances everywhere, not always attentive to the contribution of local populations and their cultural heritage.

The professional practice of the architect and town planner faces a wide and complex re-signification of their social and cultural place; the possibility of crisis, but also of expansion of the field of. of the architect deserves a necessary and profound reflection.