“It is now well-documented that some of Brooklyn’s much-written-about creative class is being driven out of the borough by high prices and low housing stock. Some are going to Los Angeles (or even Queens), but others are migrating to the Midwest, where Detroit’s empty industrial spaces, community-based projects, experimental art scene and innovative design opportunities beckon, despite the city’s continuing challenges,” wrote Jennifer Conlin in a recent New York Times article titled “Last Stop on the L Train: Detroit.” Design and designers, art and artists, creativity and creatives; all playing a major role in a process we know well: a city on the verge of reinventing itself after a near-death experience.

Over the last century, two paradigms have dominated attempts at dealing with the challenges of the city. On one hand, a “substantive” approach that aims to control the physical substance of the city, treated as a completely predetermined object: form and life dictated by some architects who claim a universal understanding of the goals and values of society to which they incorporate the advances of science in order to improve the conditions of the city. On the other, a “procedural” or strategic approach where the focus is on the process, better understood as a form of social action, a negotiated creation involving many stakeholders with overlapping or competing interests in the process of developing visions, identity and, of course, physical projects. The substantive and the procedural are not antagonistic concepts, but two different approaches to controlling the evolution of urban space. Furthermore, in the context of the city as a collective production that is at the same time poetic and pragmatic, the distinction of the procedural and the substantive is inevitably subsumed by the “practice” of city building as distinct from city design.

Different pedagogical models expose students to their potential role in the process of making and re-making the city. Detroit is the perfect frame of reference to debate the merits of worldwide academic and professional practices in the continuum between the substantive and the procedural. It is an inspiring back drop to discuss a range of issues that include the expanding role of the architect and the relevancy of architectural education, density vs. growth; technique and strategies of urban regeneration;  technology, smart cities and their impact on space and governance; new models of public space; changes in cities due to the rise of the shared economy; affordable housing and housing models for shifting demographics; resources, energy waste and sustainability; urban-rural balance and interconnections, the role of educational institutions, and community building.

These and other issues examined from multiple viewpoints linked to architectural education, will, we trust, make for an exciting and productive ACSA Annual Meeting in Detroit 2017. Click below to see the full 2017 Annual Meeting Agenda + Regional Caucus Agenda and the 2017 Architectural Education Award Winners. 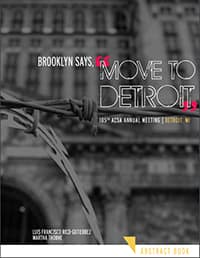 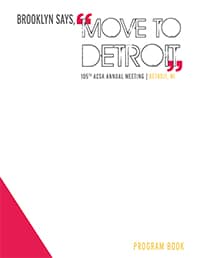 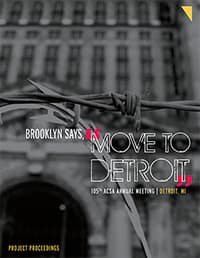