Offers architecture students the opportunity to select a site and building program using steel as the primary material. This competition category permits the greatest amount of flexibility for any building type. 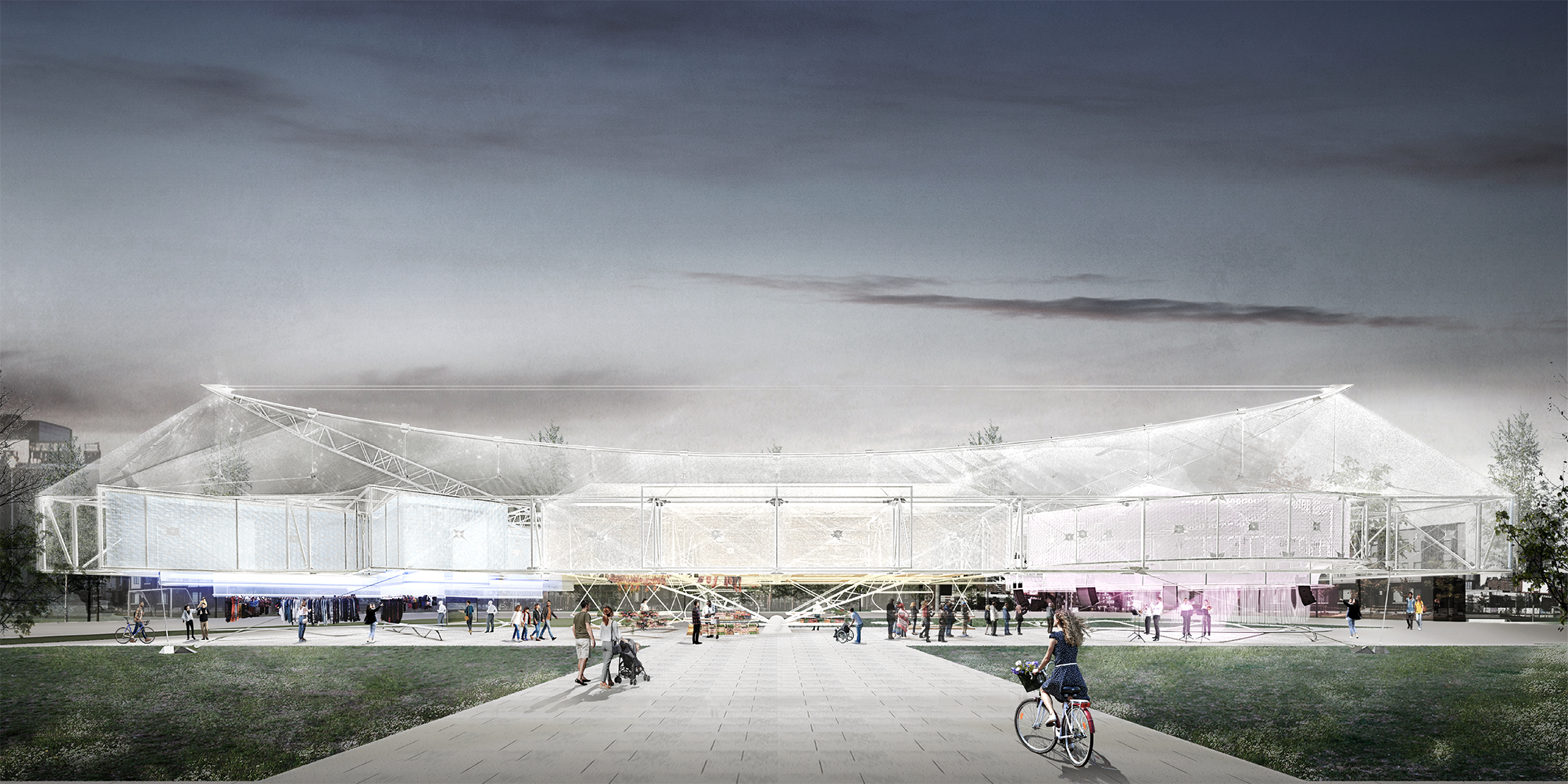 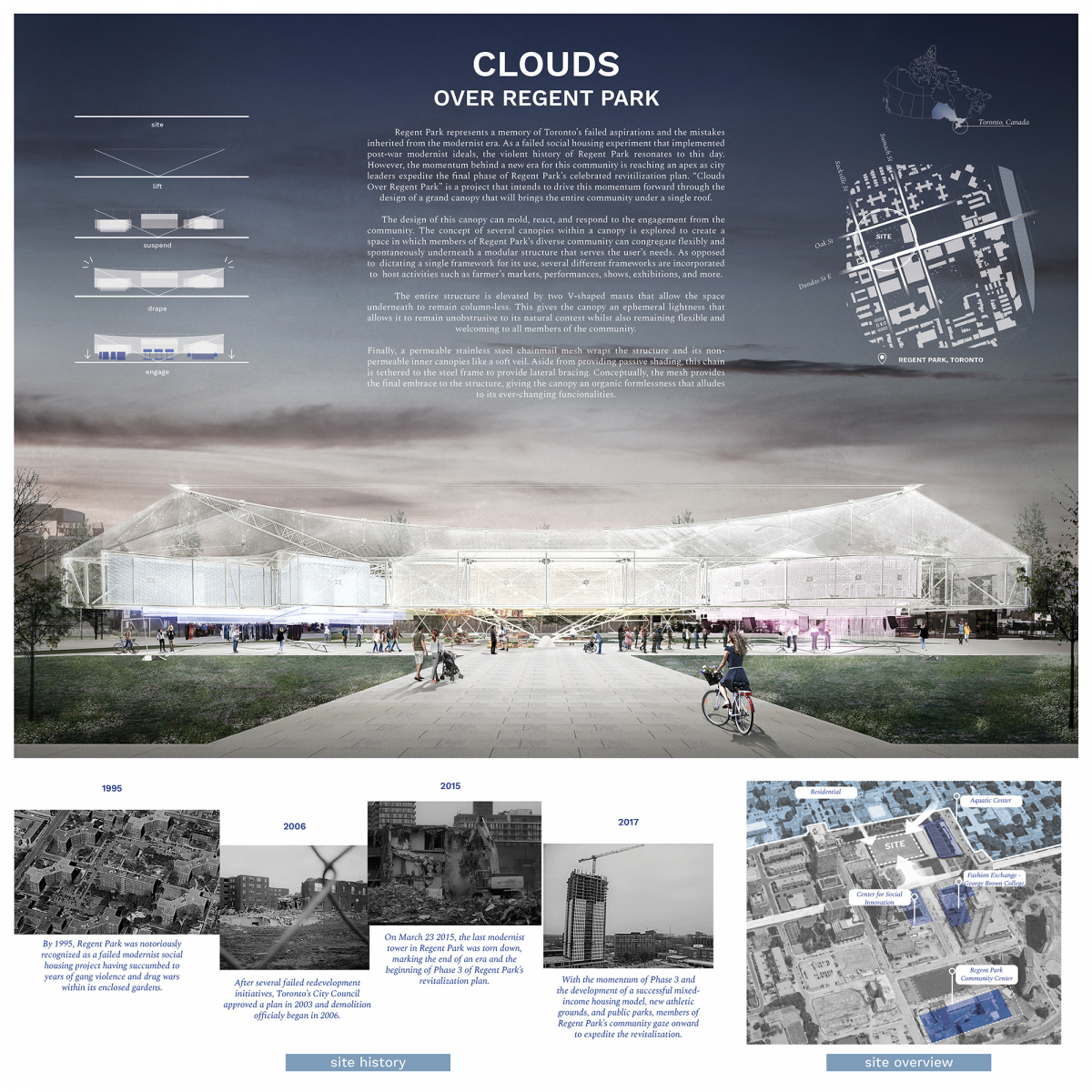 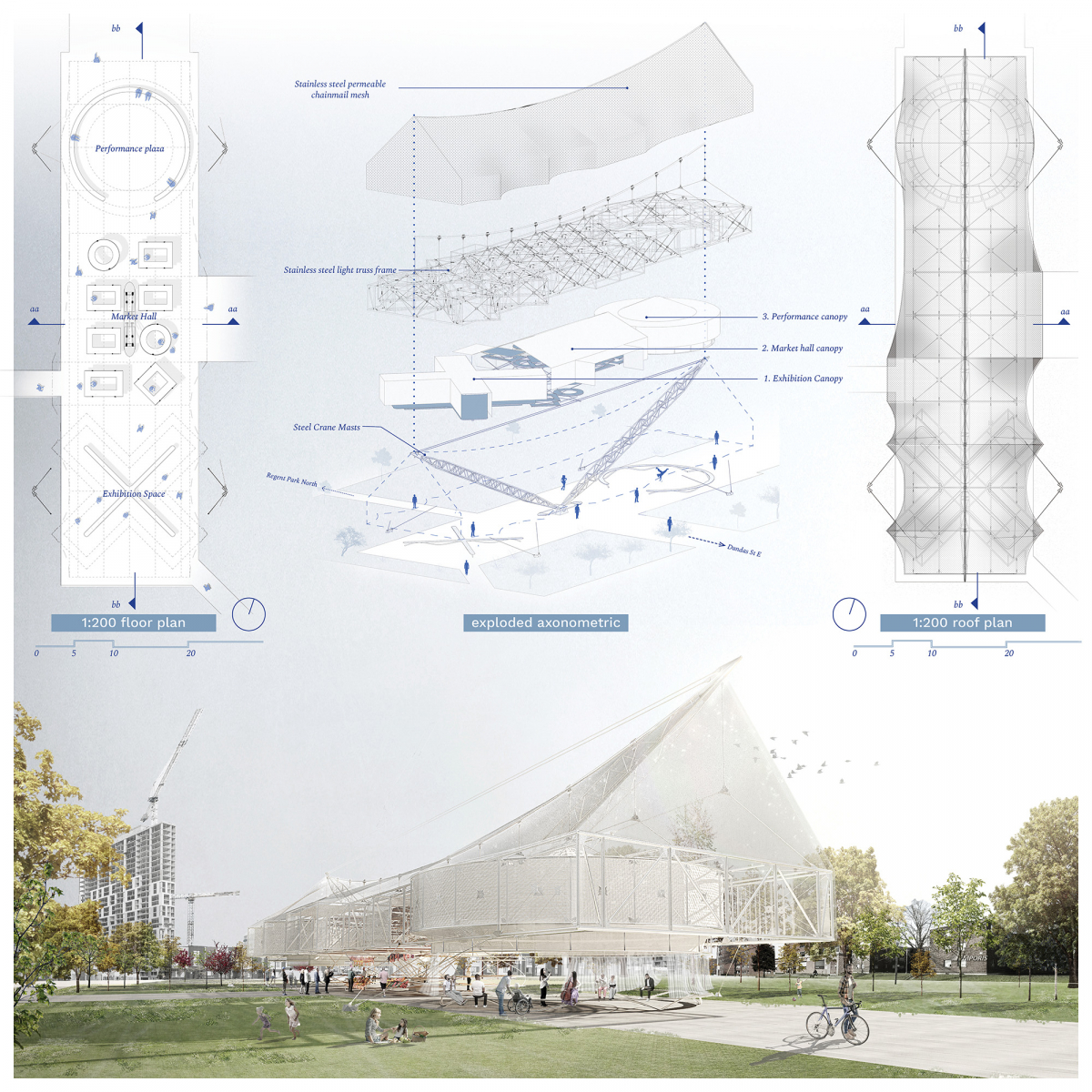 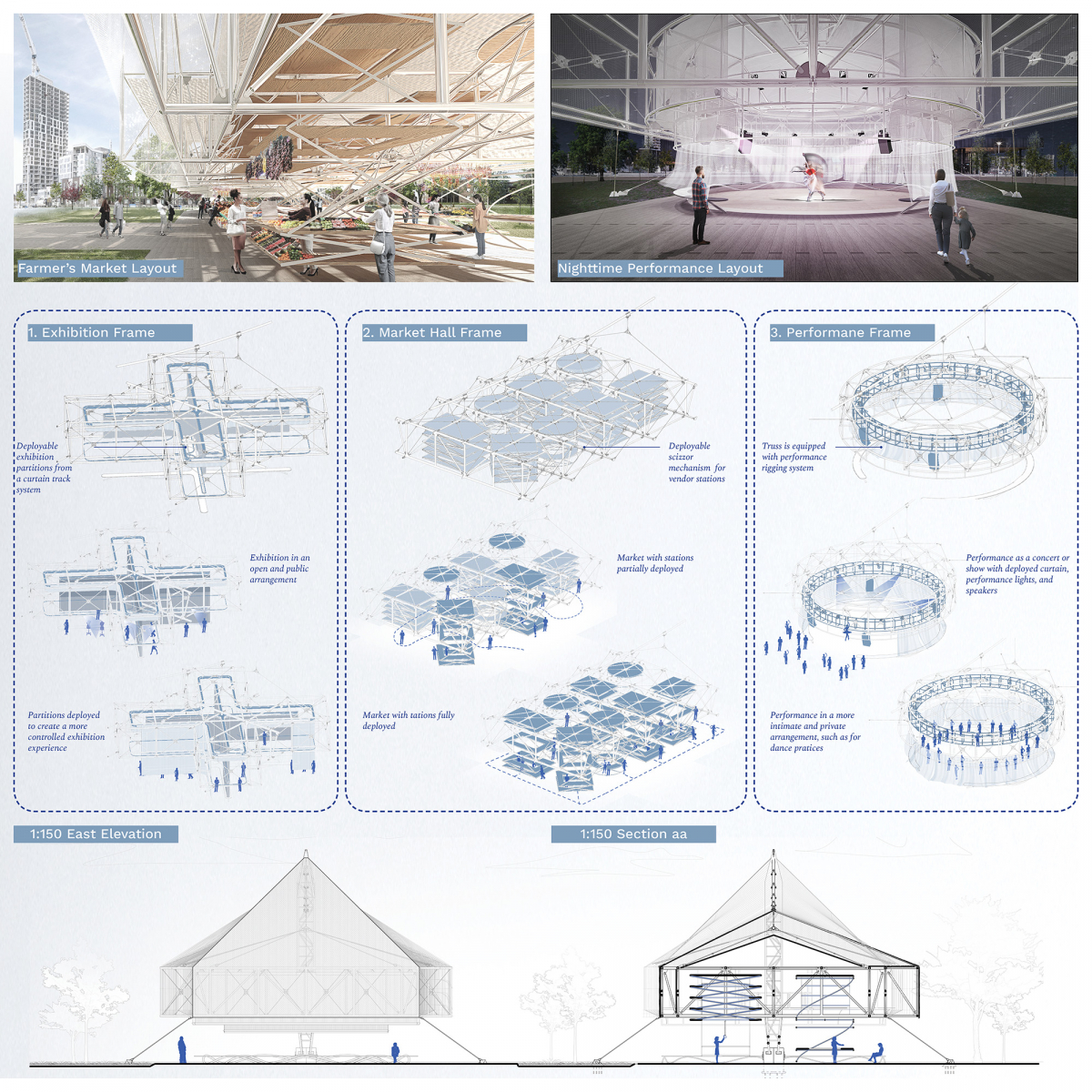 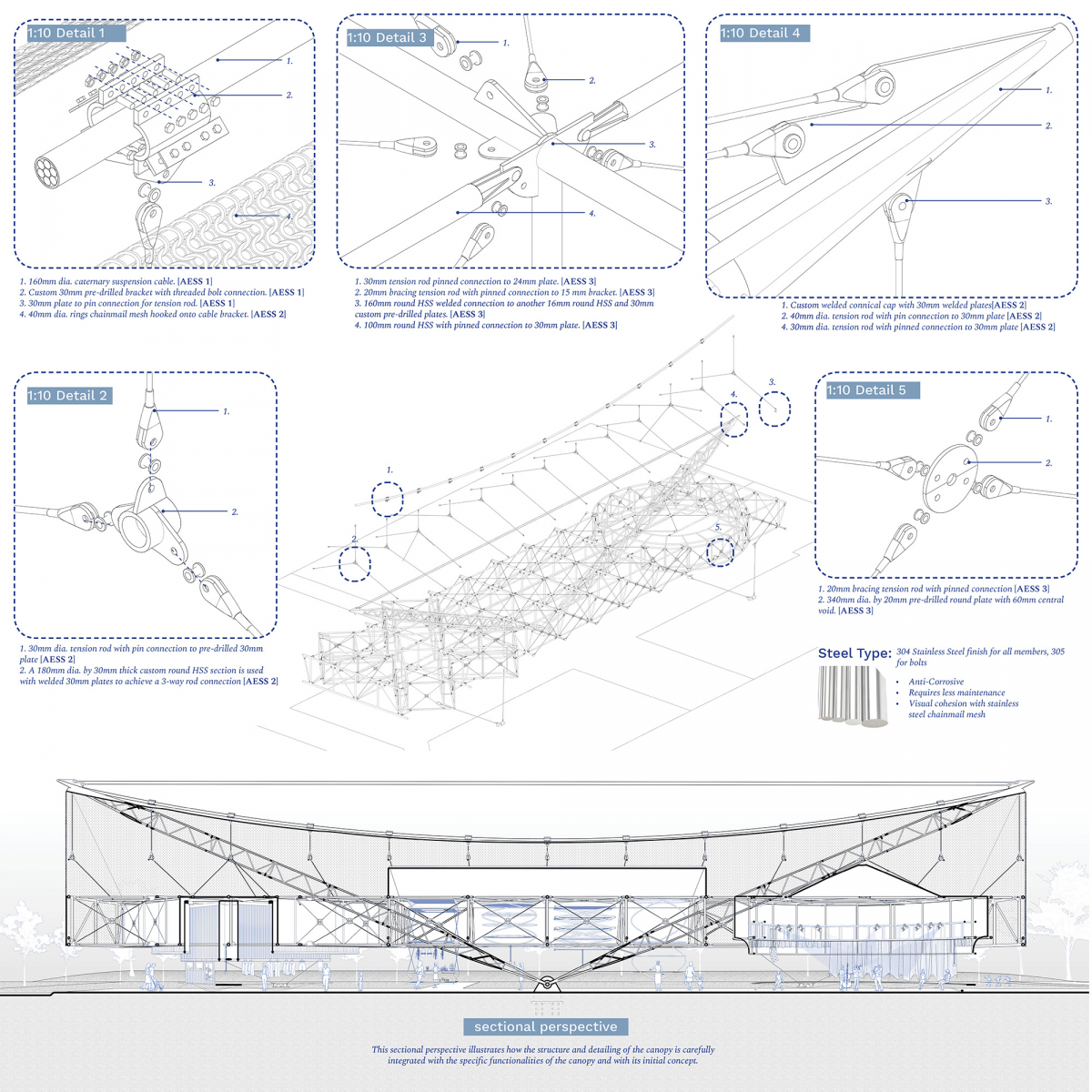 Juror Comments
Clouds Over Regent Park is a winning project for the ambitious structure and overall design that comes together to achieve a large urban impact. There’s a great balance between innovative systems from a structural perspective and aesthetic. The student demonstrates depth of knowledge of the material throughout the project and drawings.

Regent Park represents a memory of Toronto’s failed aspirations and the mistakes inherited from the modernist era. As a failed social housing experiment that implemented post-war modernist ideals, the violent history of Regent Park resonates to this day. However, the momentum behind a new era for this community is reaching an apex as city leaders expedite the final phase of Regent Park’s celebrated revitalization plan. “Clouds Over Regent Park” is a project that intends to drive this momentum forward through the design of a grand canopy that will bring the entire community under a single roof.

The design of this canopy can mold, react, and respond to the engagement from the community. The concept of several canopies within a canopy is explored to create a space in which members of Regent Park’s diverse community can congregate flexibly and spontaneously underneath a modular structure that serves the user’s needs. As opposed to dictating a single framework for its use, several different frameworks are incorporated to host activities such as farmer’s markets, performances, shows, exhibitions, and more.

The entire structure is elevated by two V-shaped masts that allow the space underneath to remain column-free. This gives the canopy an ephemeral lightness that allows it to remain unobtrusive to its natural context whilst also remaining flexible and welcoming to all members of the community.

Finally, a permeable stainless steel chainmail mesh wraps the structure and its non-permeable inner canopies like a soft veil. Aside from providing passive shading, this chain is tethered to the steel frame to provide lateral bracing. Conceptually, the mesh provides the final embrace to the structure, giving the canopy an organic formlessness that alludes to its ever-changing functionalities. 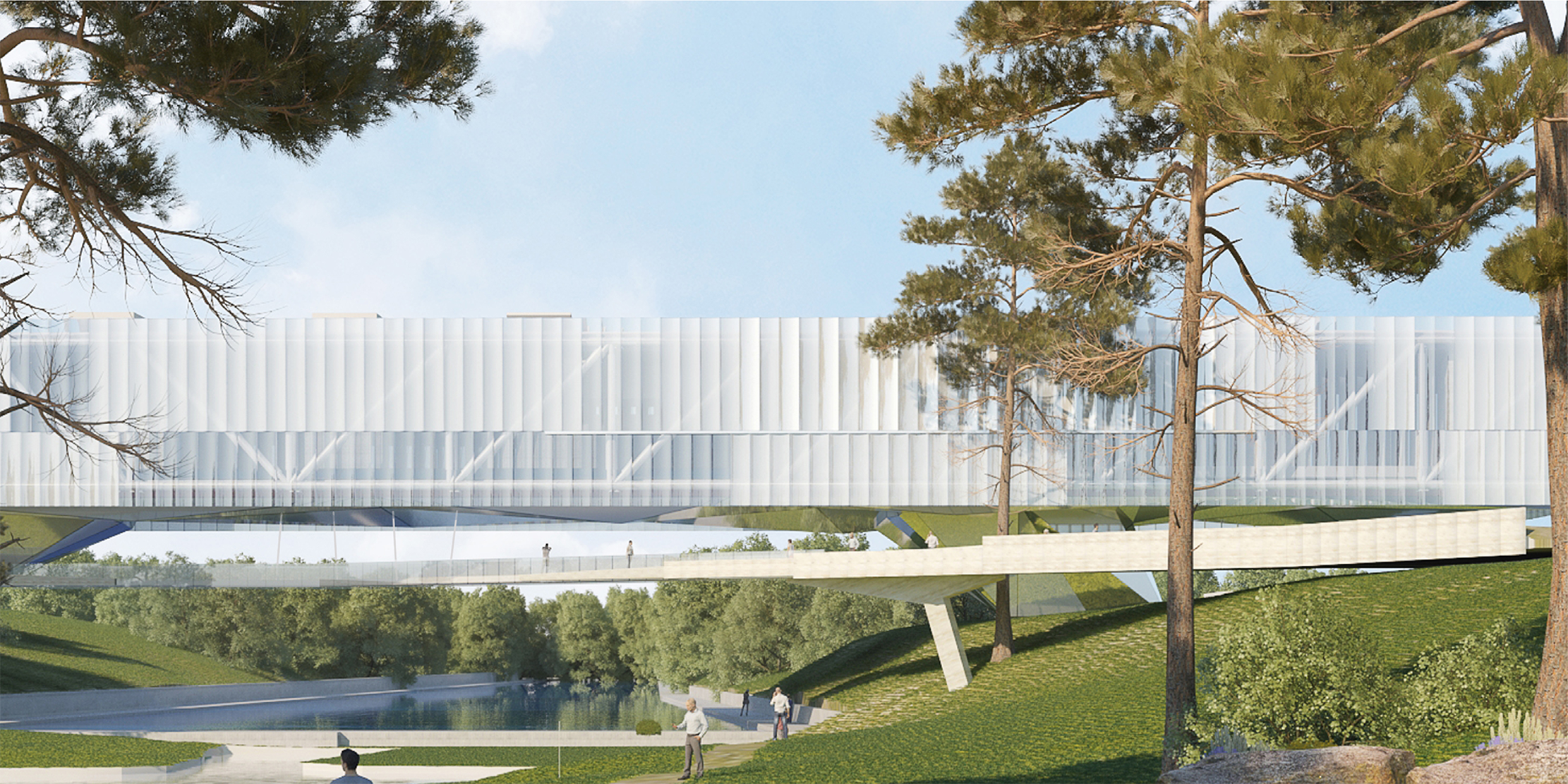 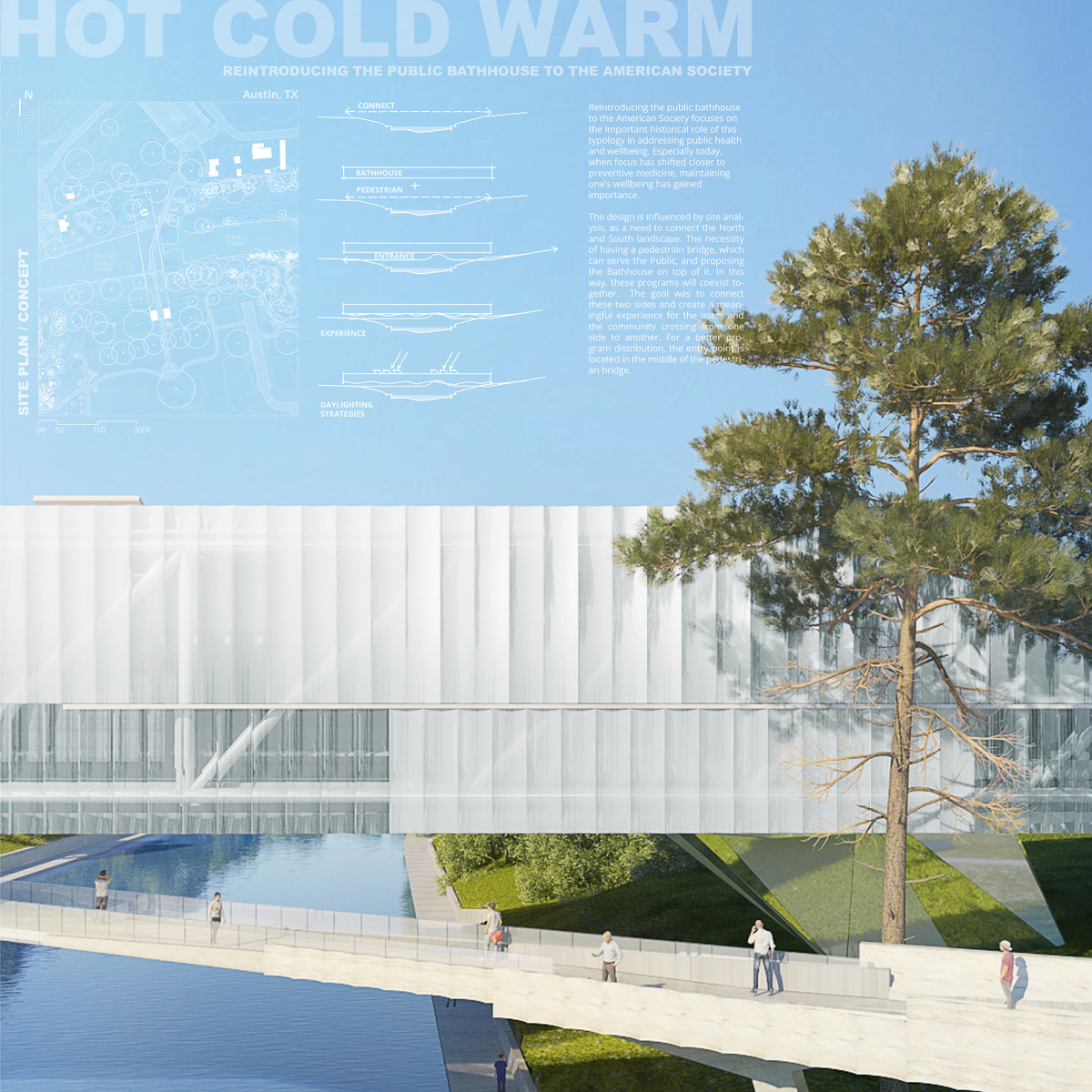 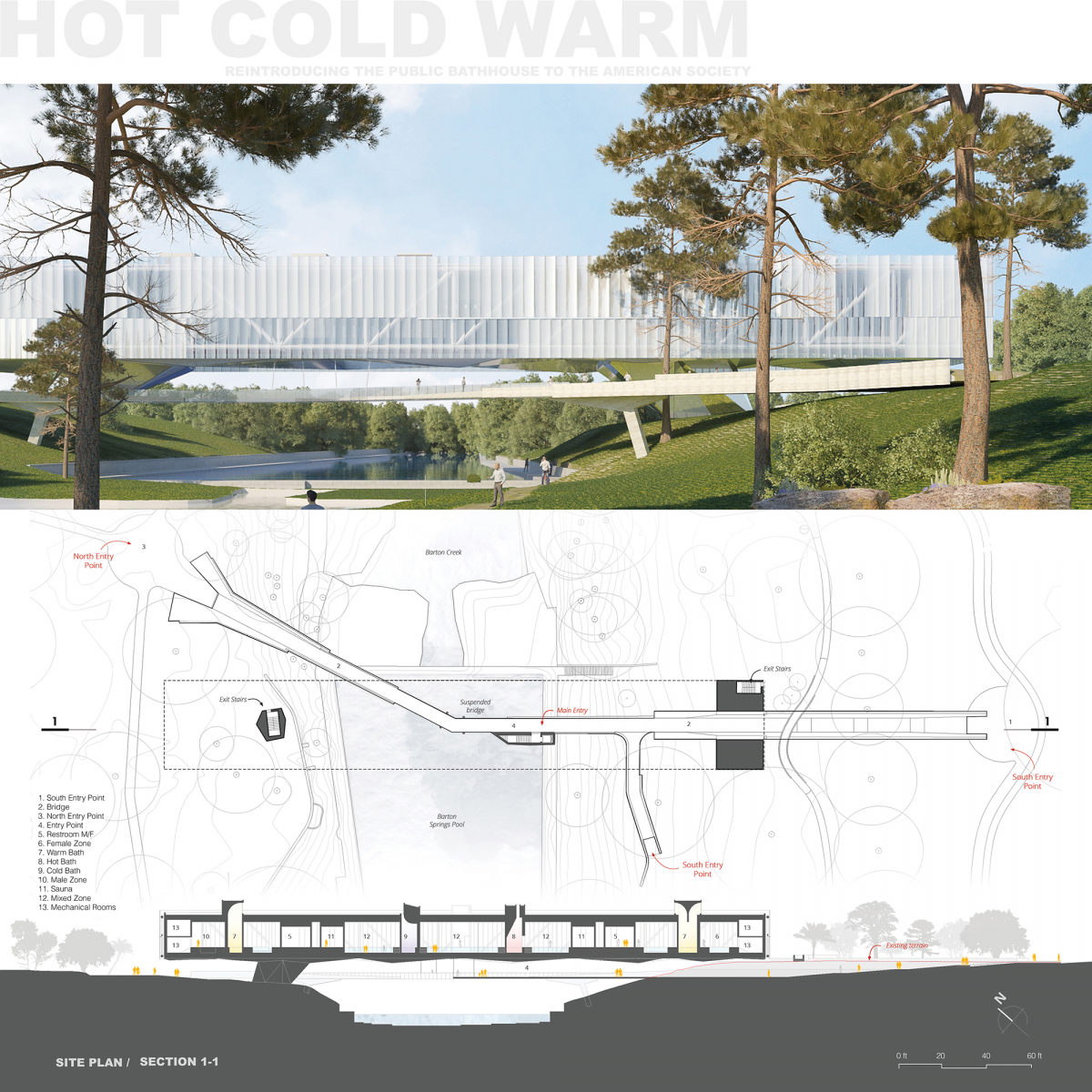 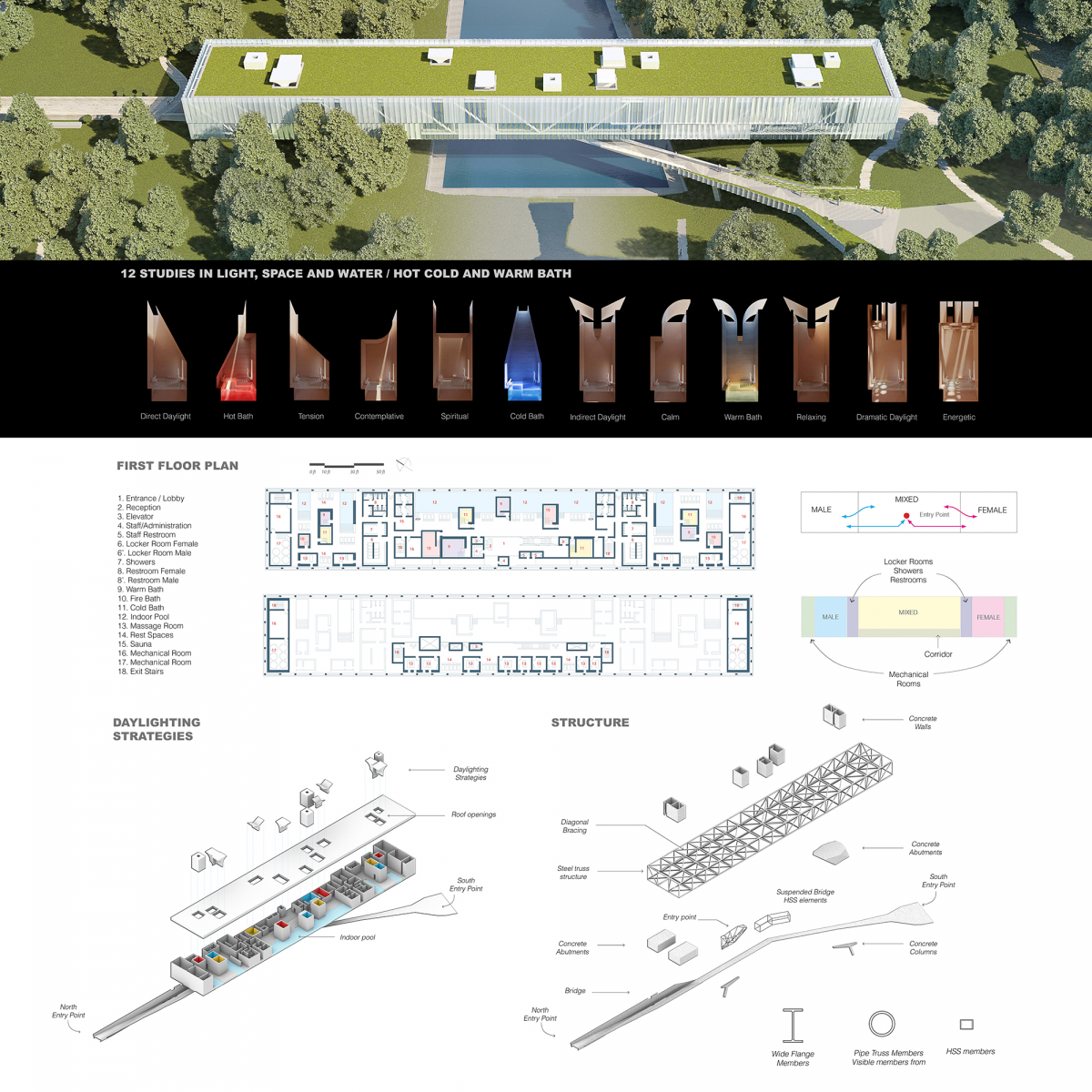 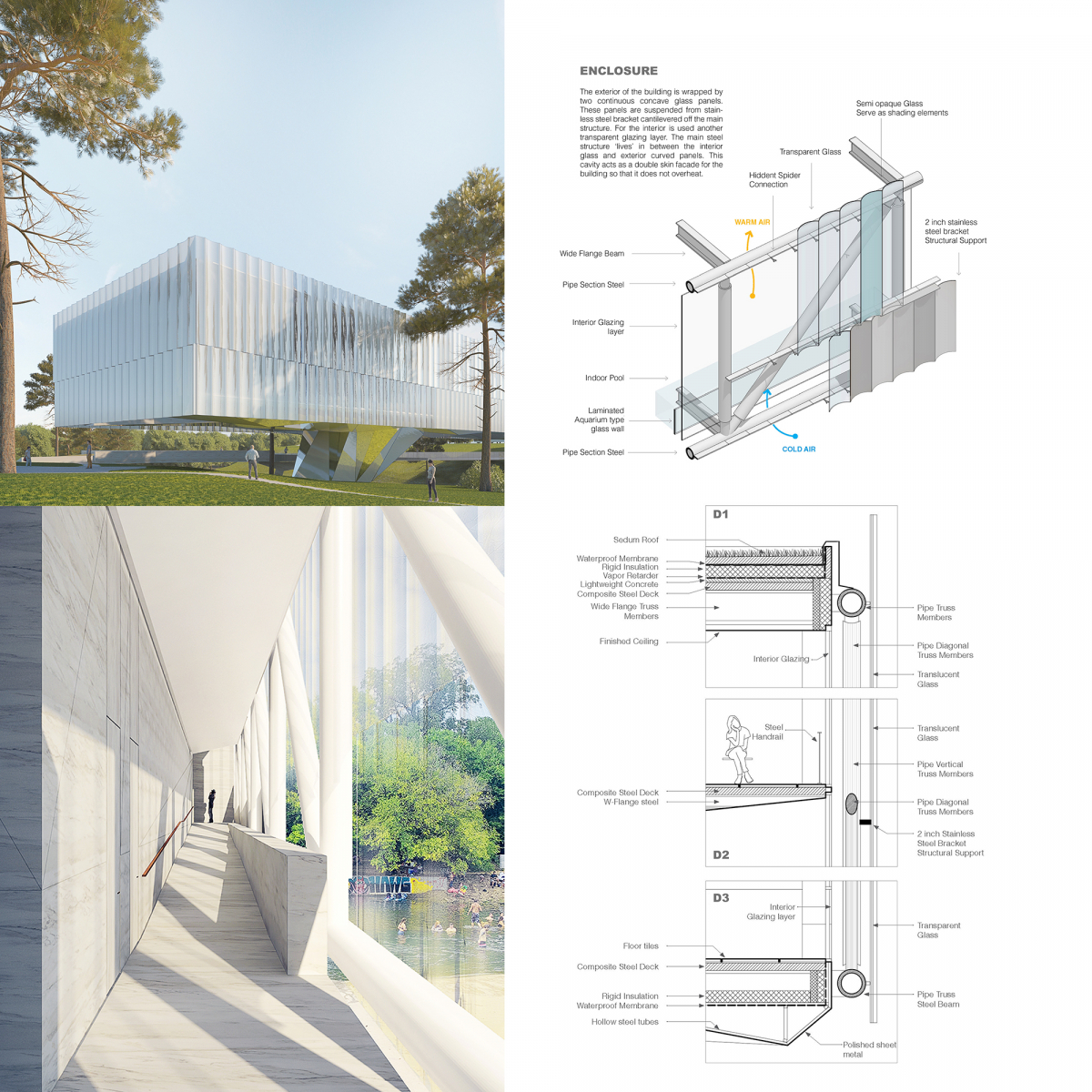 Juror Comments
Hot Cold Warm is a winning design for the efficient use of steel and the elegant way the exposed structure is presented. The students’ drawings showcase their technical understanding and depict the structure in a sophisticated and believable manner.

Hot Cold Warm aims to reintroduce the public bathhouse to the American society. The project builds on the historical role of this typology in addressing public health and wellbeing. In a time when preventive medicine has gained traction in maintaining one’s wellbeing, bathhouses could find their way back into the routine activities that people perform. The hot, cold, and warm, represents the main spaces within bathhouses, referring to the different temperatures of each respective space.

This project is located in Austin, TX and is influenced by the site analysis. The goal was to connect the North and South landscape and to create a sensuous experience for the users and the community crossing from one side to another. The design comprises a pedestrian bridge which serves to the public and the bathhouse on top of it.

The steel truss structure plays a primary role in the design. All its elements are left visible in the interior and exterior. To address different programmatic needs, three different concave glass panels come together to enclose the building. The top panels are mostly opaque and translucent, which helps keep the privacy and at the same time serve as a shading element. Whereas transparent glass is used at the lower part of the façade to allow for visual connection with the surrounding landscape. These panels are suspended from stainless steel brackets cantilevered off the main structure. For the interior is used another transparent glazing layer. The structure ‘lives’ in-between the interior glass and exterior concave panels. This cavity acts as a double skin facade for the building so that it does not overheat.

The project is an exploration journey through architectural concepts and a combination of structural shapes, materials, lighting, and nature. The design aims to create a sensuous experience for the visitors while responding to the surrounding context and culture. 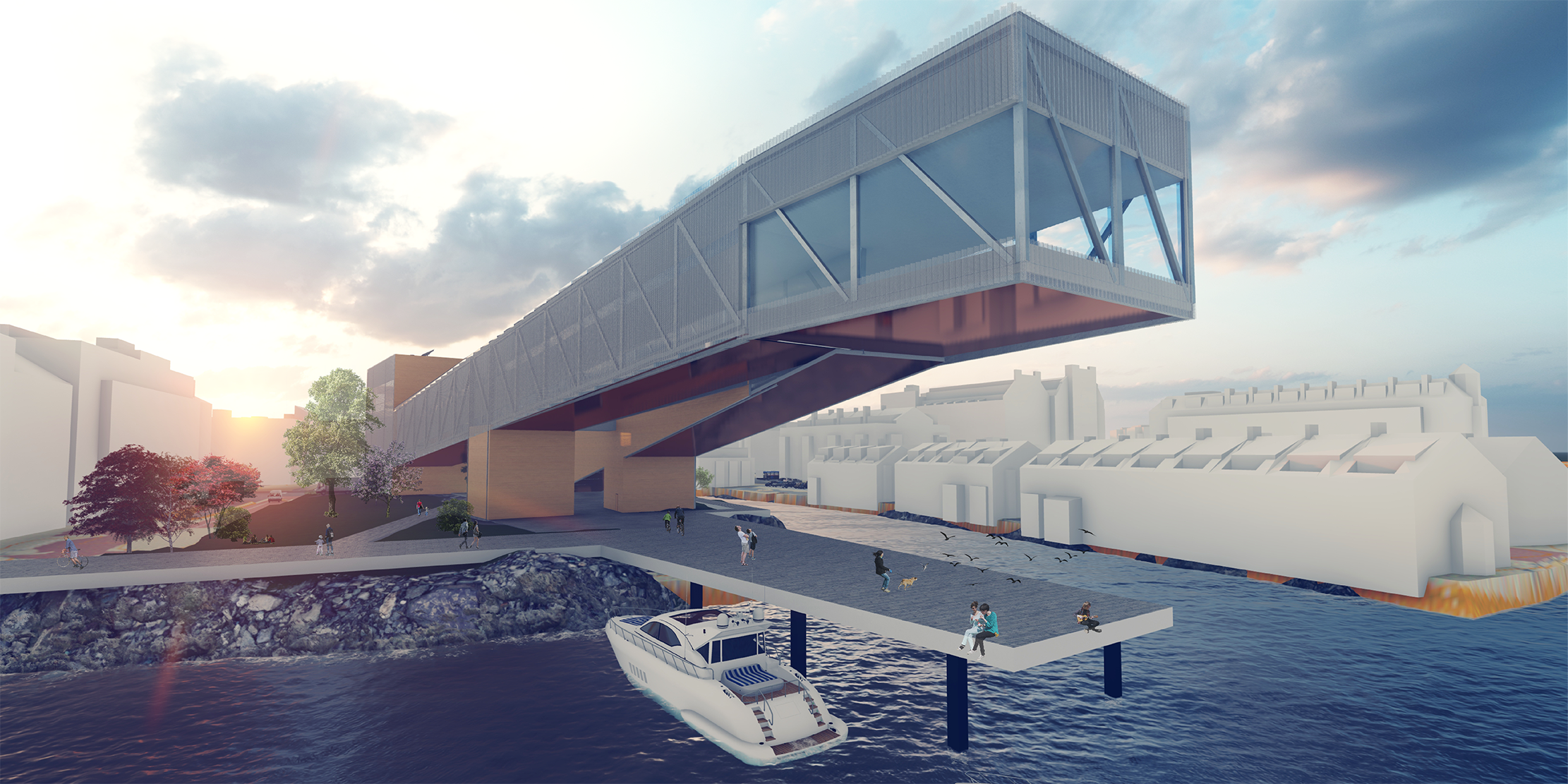 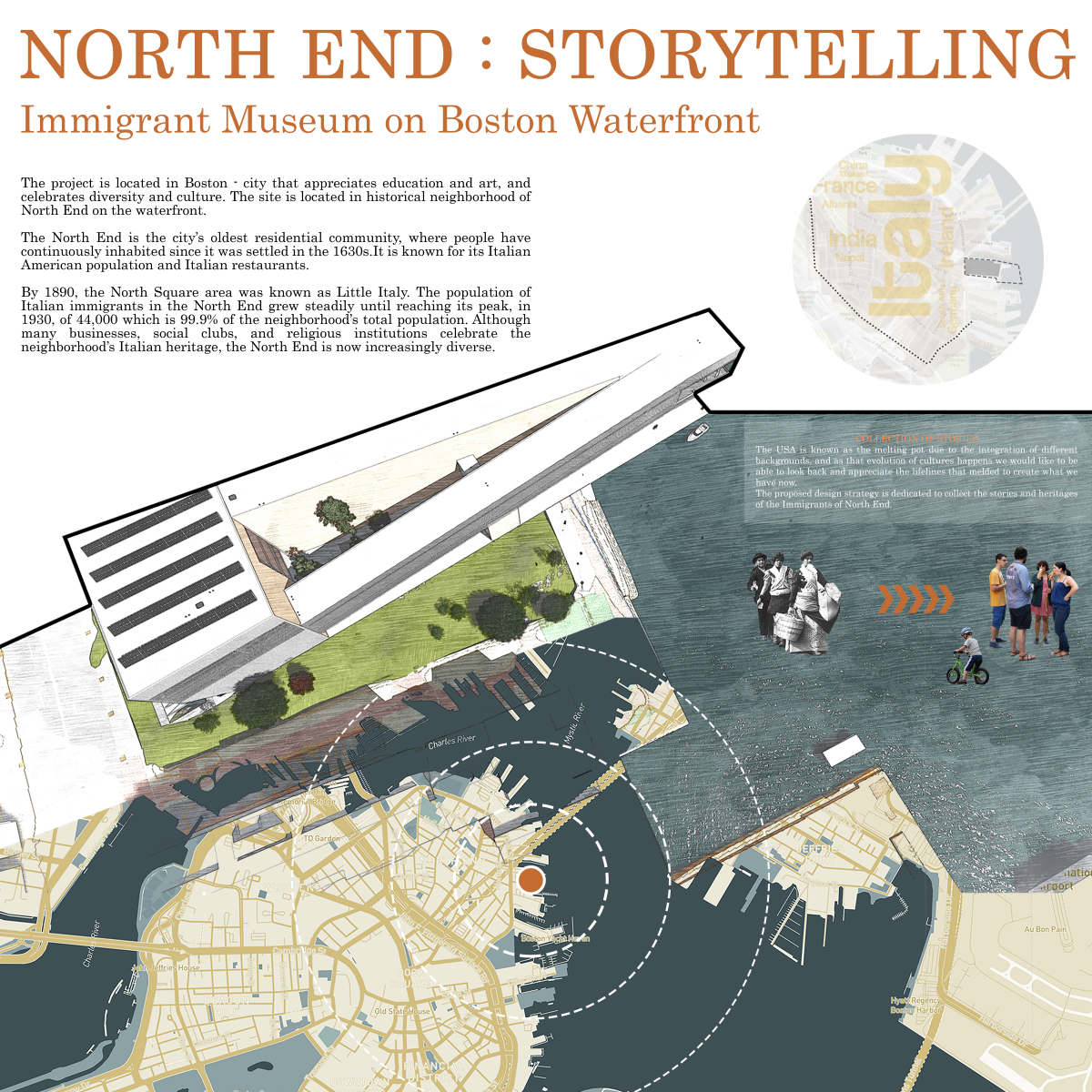 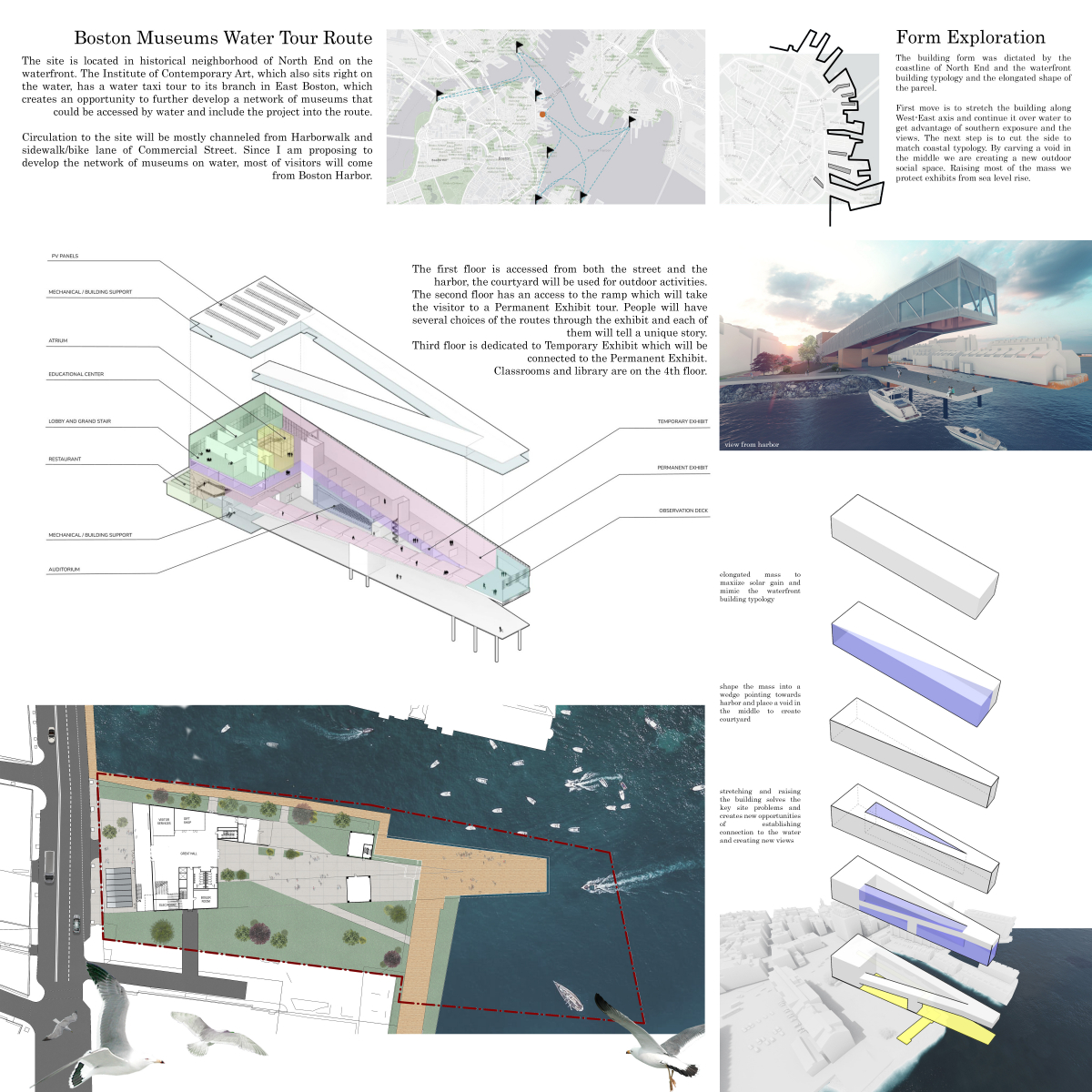 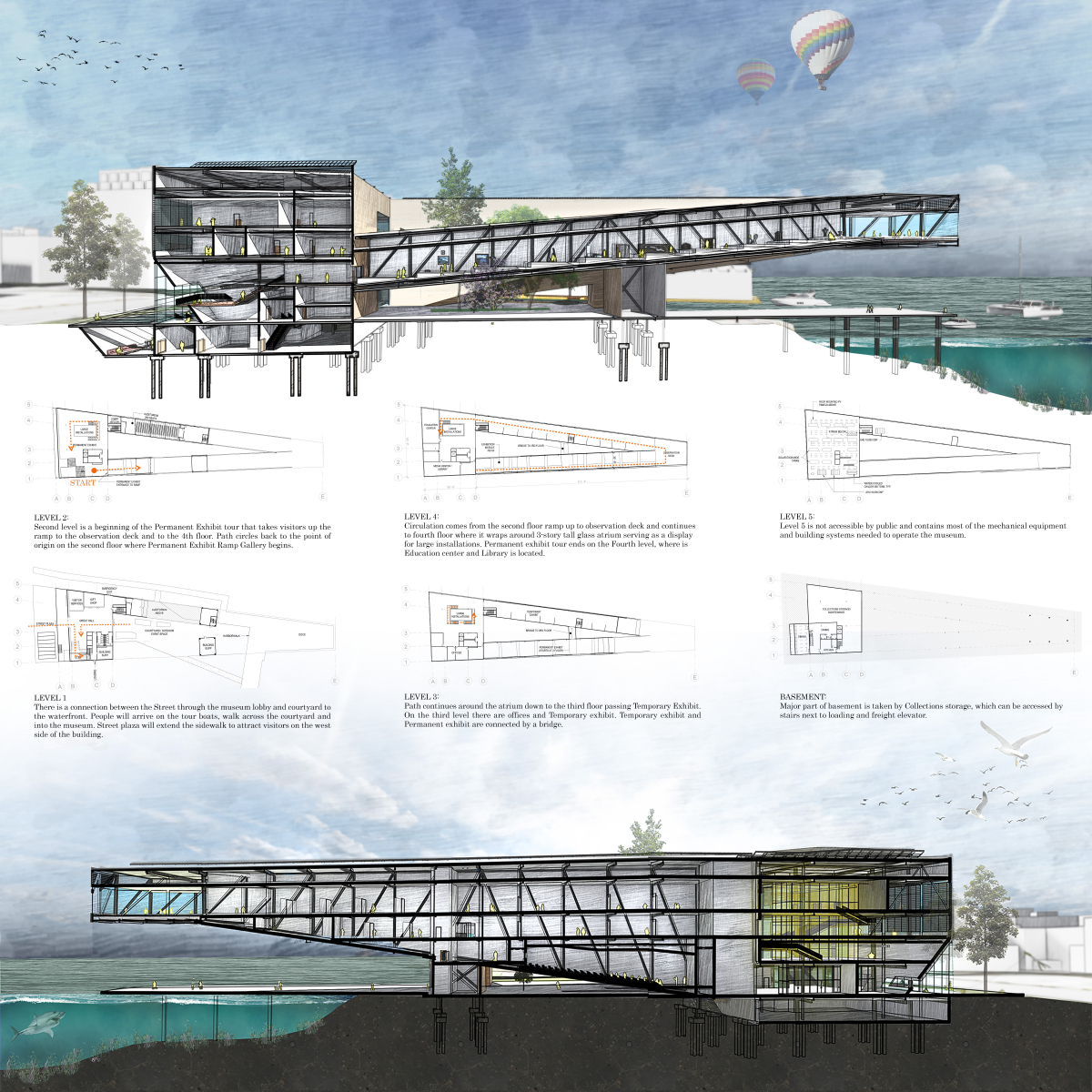 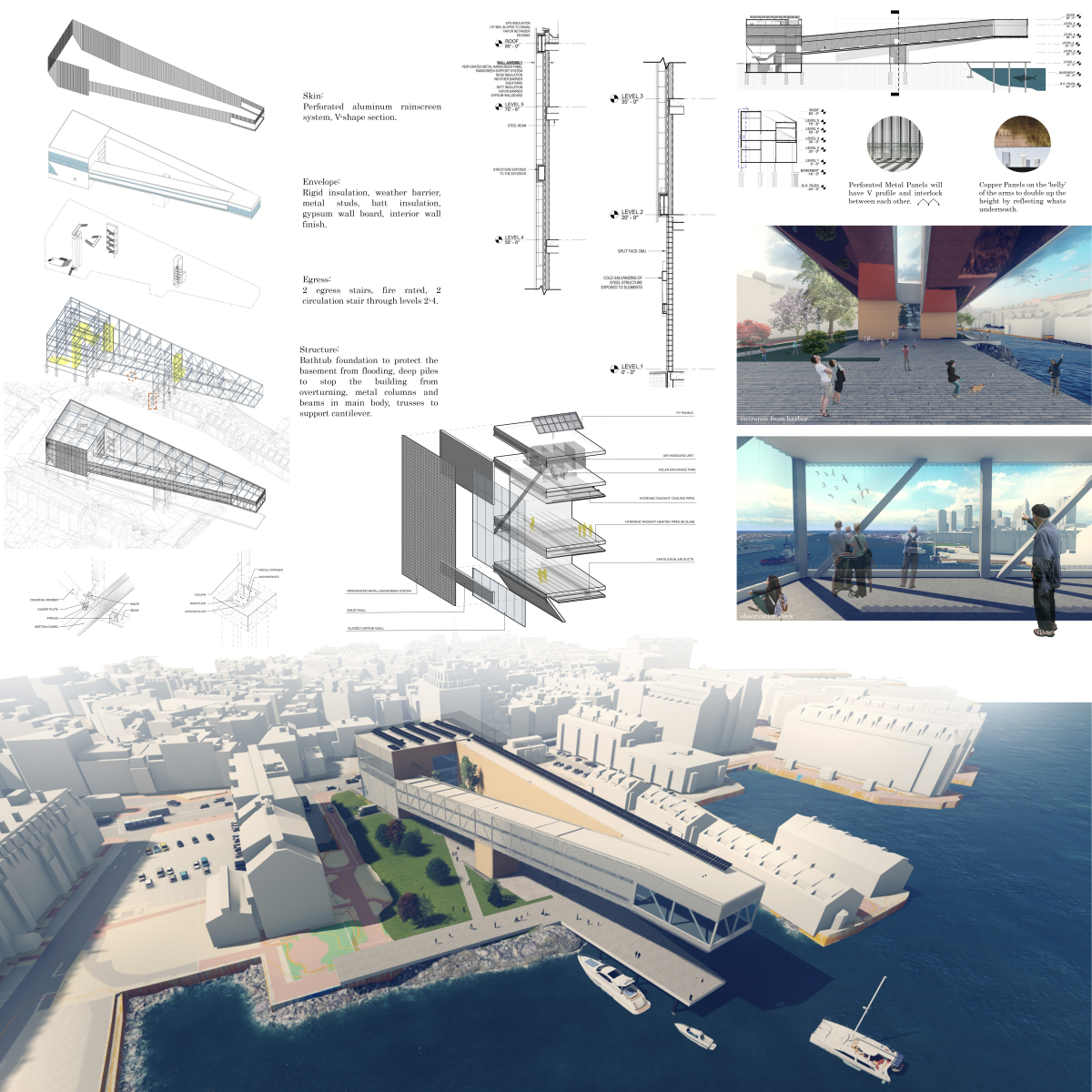 Juror Comments
North End: Storytelling. Immigrant Museum on Boston Waterfront. is a selected winner for the truss structure design and how this could be implemented on a large urban scale. The program celebrates the idea of the immigrant story through the impeccable drawings and designed story telling.

Boston’s North End neighborhood has incalculable reasons to be celebrated and protected, with some of the oldest buildings in Boston, historical significance dating back to pre-1776, and a bustling hub of activity and social interaction. However, the true value of the North End is the preservation of over three hundred years of continuous European colonization, the vast tapestry of cultural integration and inclusion, and the population fluctuation over the decades in the North End.

This project would be a monument to the importance of the immigrants and settlers who constructed and expanded the North End from too few residents to warrant their own church, to the thriving cultural and historic landmark it is today. Having such a major ethnic population sway in such a short time left its mark on the North End, flipping from almost exclusively Irish, to predominantly Italian, with smaller groups living and influencing the area as well.  All these cultures are the quintessential ‘American melting pot’ and show the rich history of the district, and the United States of America in its earliest years.

We will protect the culture and history of the North End neighborhood founders and residents, by ensuring their stories to be passed along. The museum would take visitors on a journey through the extensive history of this neighborhood and the city as they rise through the building, watching the growth and expansion of the North End through records and memories. This museum would be an architectural monument for all the people who found Boston and United States their home. It would take visitors for a journey of its exhibitions, which would tell a story of immigrants of Boston. The new structure would inhabit waterfront building typology in a new progressive way, which would attract tourists and locals alike. With the North End remembered and eternalized, we can look back at the area’s vivid, amazing history with a progressing journey through the memories and stories of the North Ends citizens. 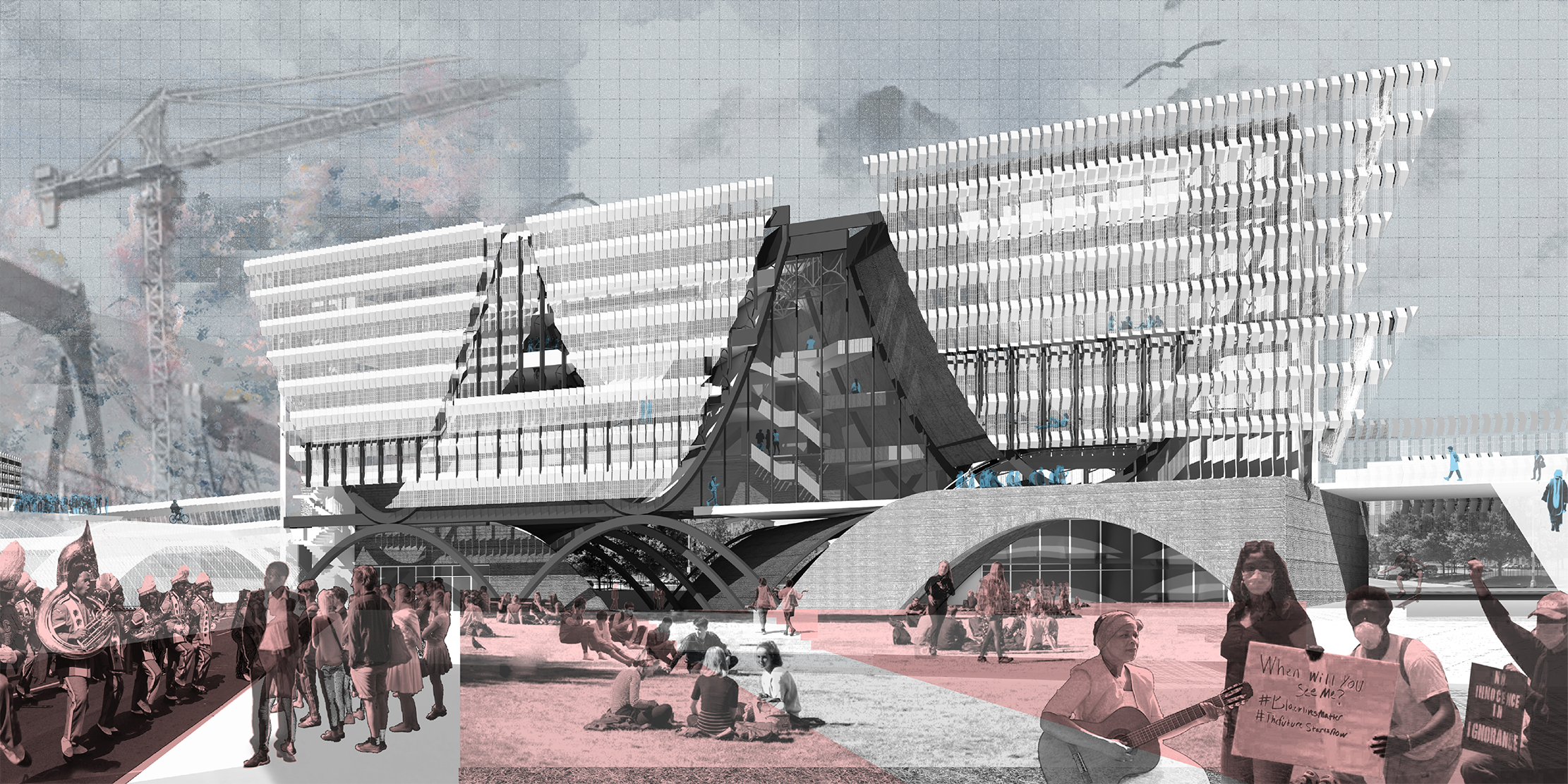 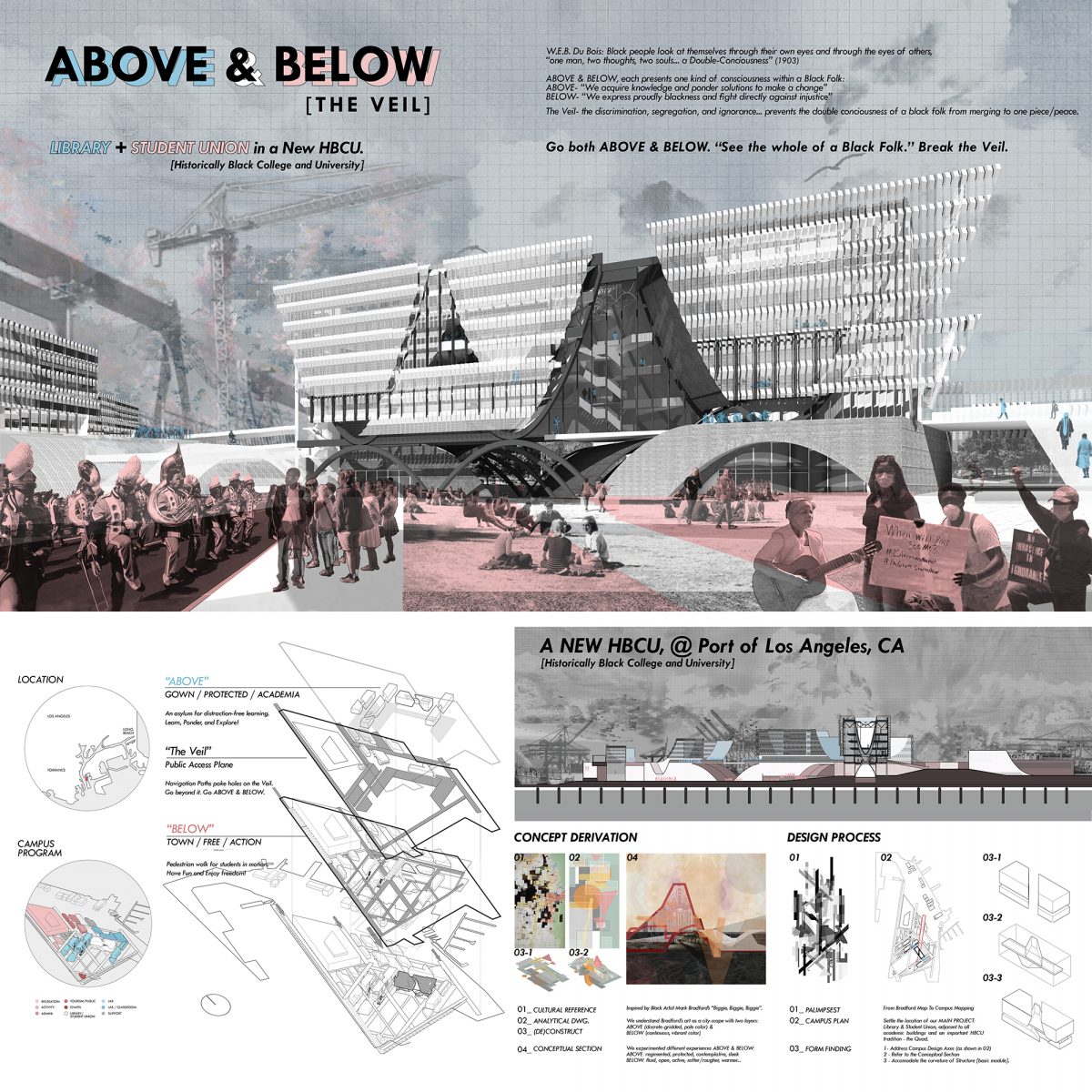 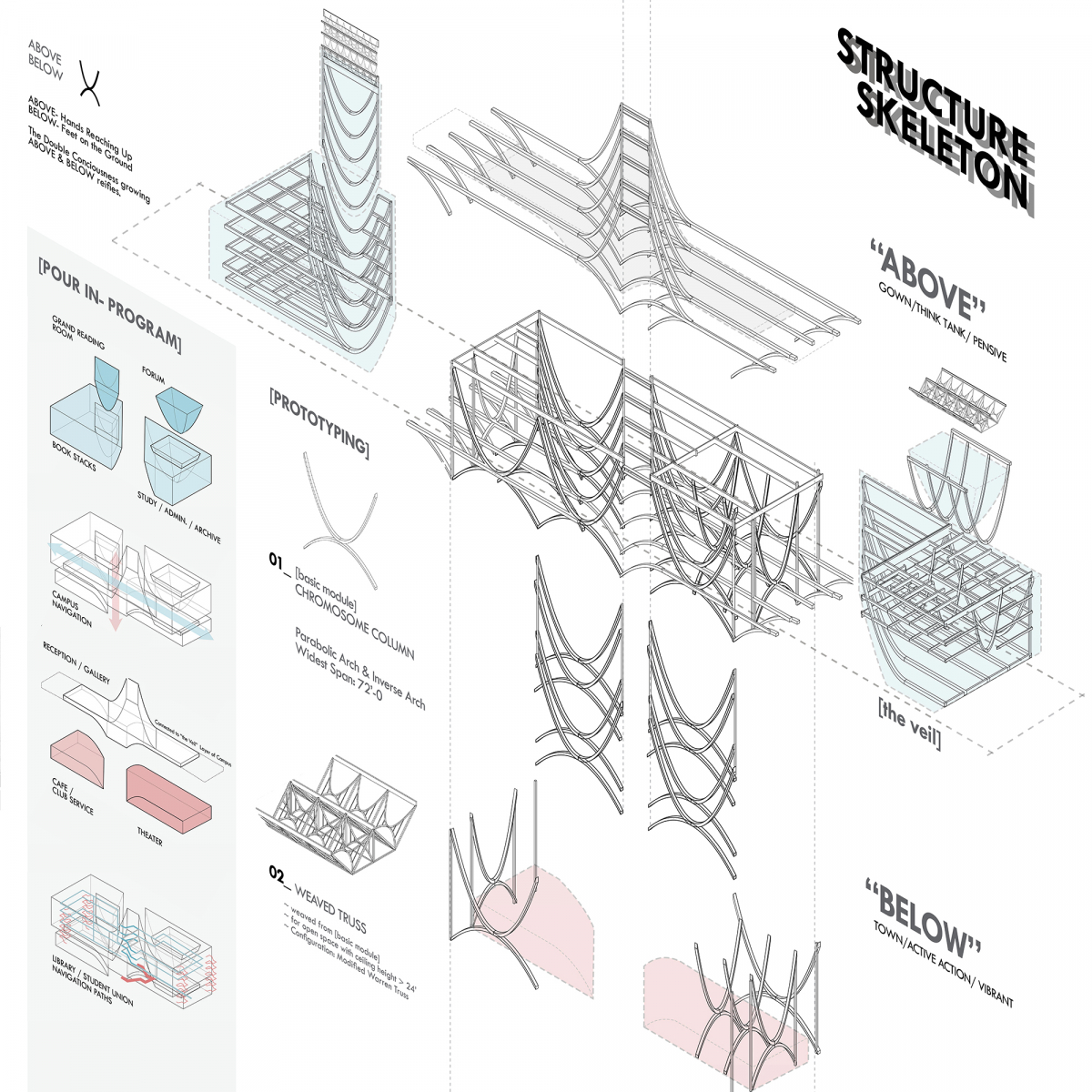 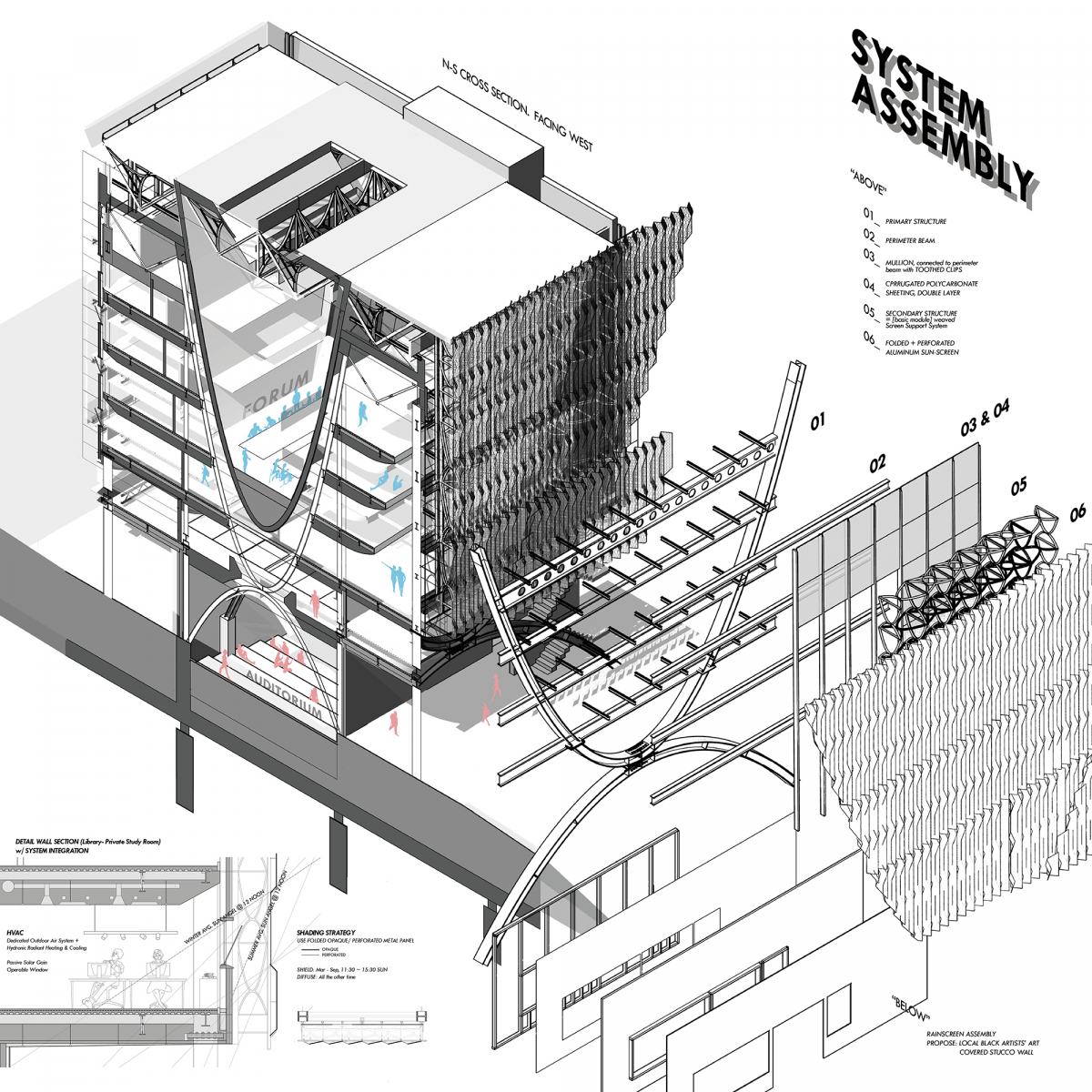 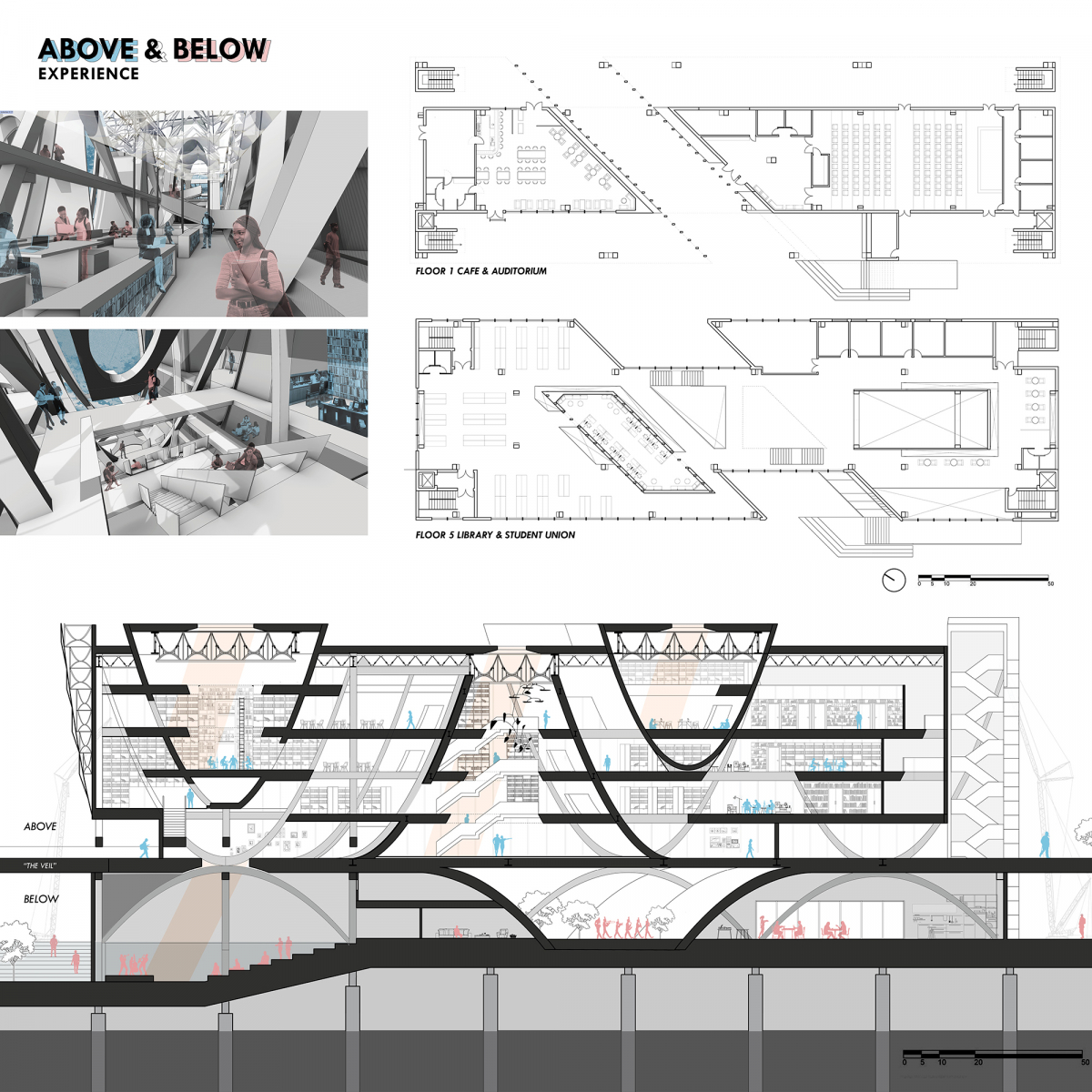 Above & Below [the veil]

Juror Comments
ABOVE & BELOW [the veil] is an honorable mention for utilizing a unique truss design. From a structural perspective, the students fully grasp ideas on how trusses can be optimized.

ABOVE & BELOW is a hybrid library and student union building of a newly proposed HBCU, Historically Black College and University at an abandoned pier of the LA port. The college is designed for 1,000 students, with 6 colleges, a stadium, and other supporting buildings.

The design started with the transformation of a cultural map of Los Angeles, “Biggie, Biggie, Biggie” by Black artist Mark Bradford. We understand the painting as a cityscape with two contrasting layers sitting above and below the grade. Combined with W.E.B. Du Bois’ theory about the Double-Consciousness within black folks, we decide that each layer represents one state of mind, and the grade is the discriminating “veil” that prevents the two from being seen as one. “ABOVE”, black folks acquire knowledge to earn social status. “BELOW”, black folks fight and strike. This campus strives to provide a complete image of the souls of black folks.

The library-student union locates at the meeting plane of ABOVE and BELOW for its hybrid nature. It sits among the 6 colleges while defining the important HBCU tradition, the Quad. The library’s atrium connects the campus’ general-public access plane and the ABOVE or BELOW. ABOVE consists of academic spaces. BELOW is for activities, with programs like club service and café.

Building structure is comprised of steel “chromosome” columns. Each column is two parabolic arches joined at their crowns, spanning 72’. The opposite growing directions of arches reify the Double-Consciousness of black folks, becoming the basic module of this structure system. The module is repeated to form 4’ deep exposed warren trusses. The envelope ABOVE is perforated metal screen on polycarbonate curtain wall, expressing the structure through controlled transparency. The envelope BELOW is stucco rainscreen wall. Despite the contrasting texture, both are blank canvas meant for students’ creativity. 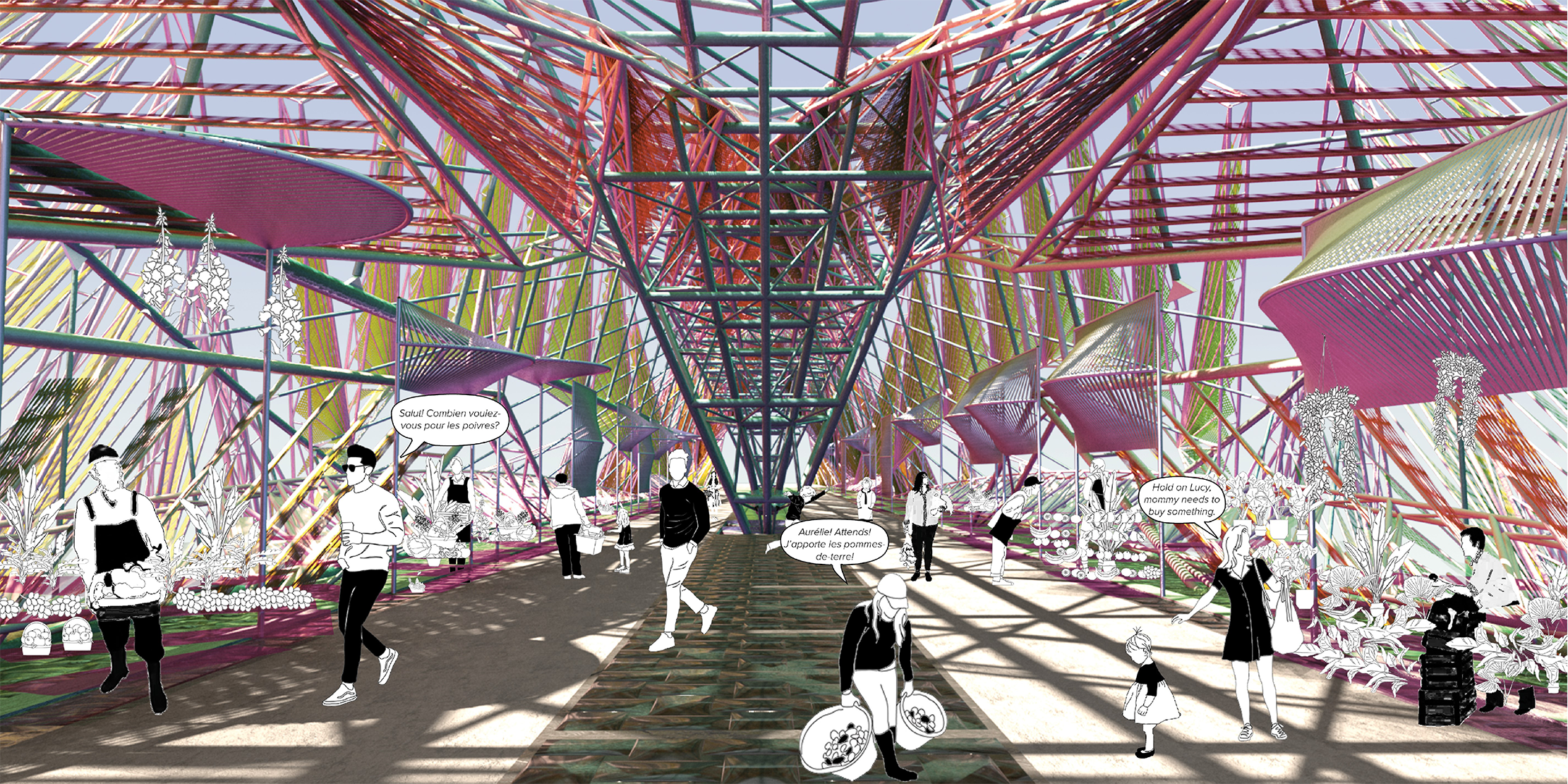 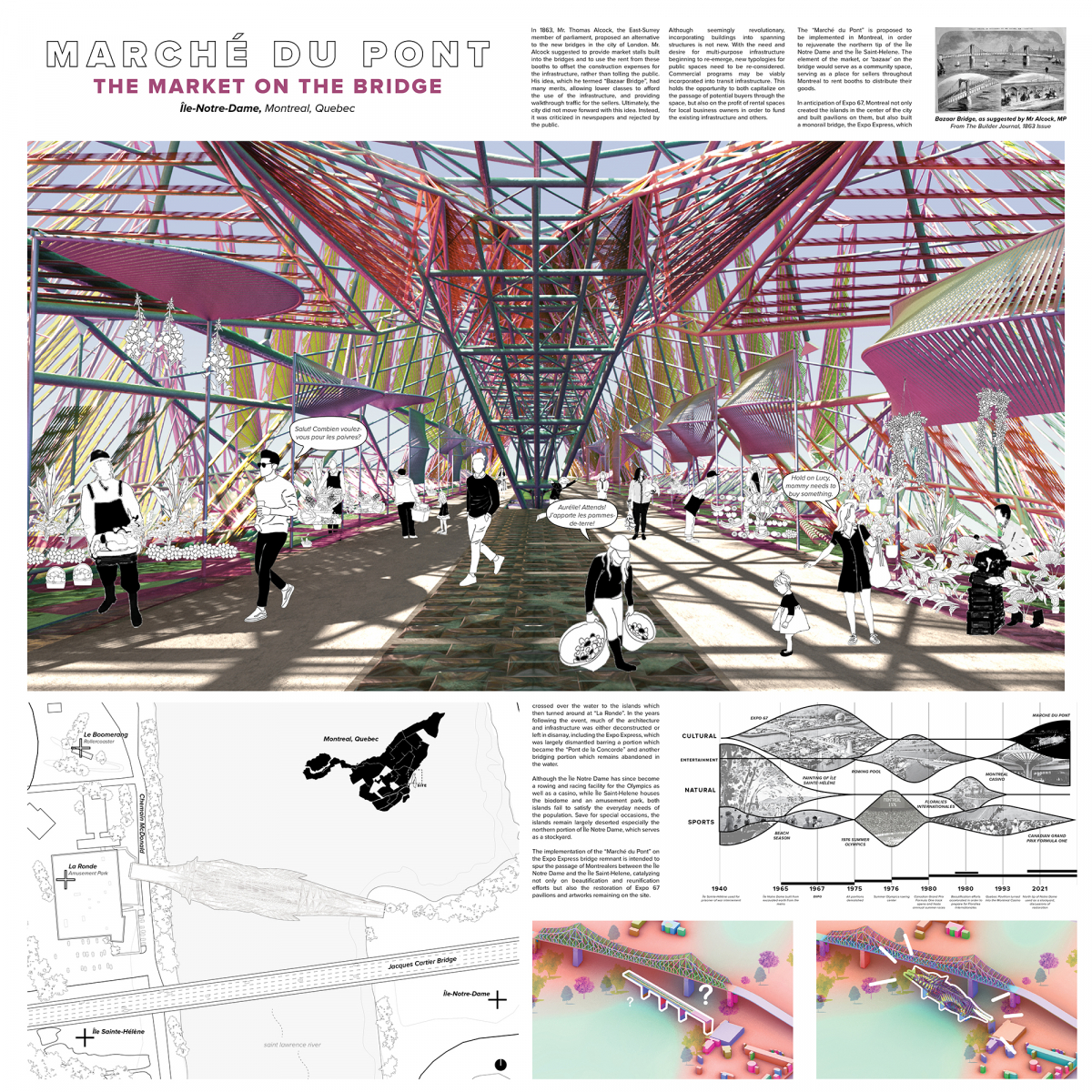 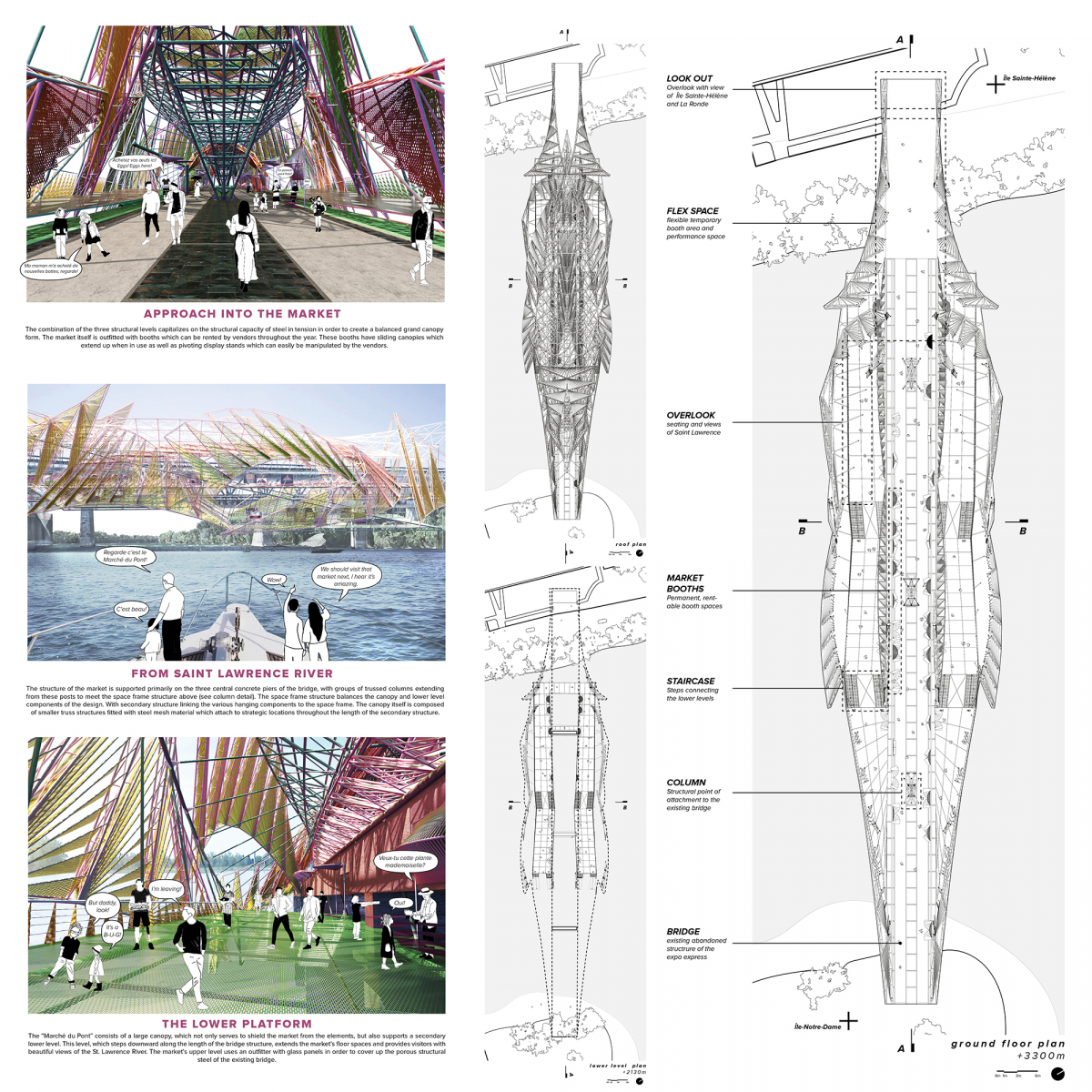 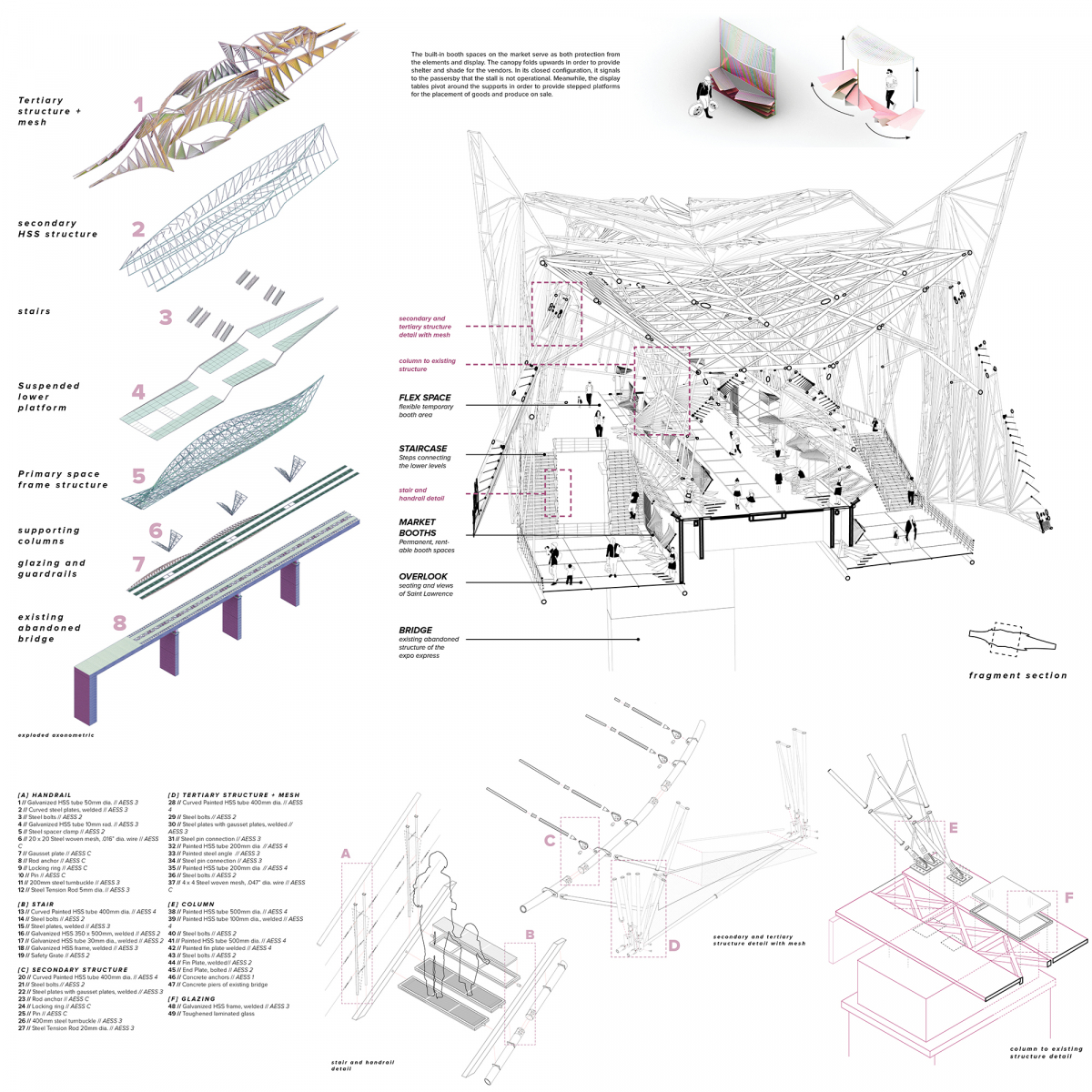 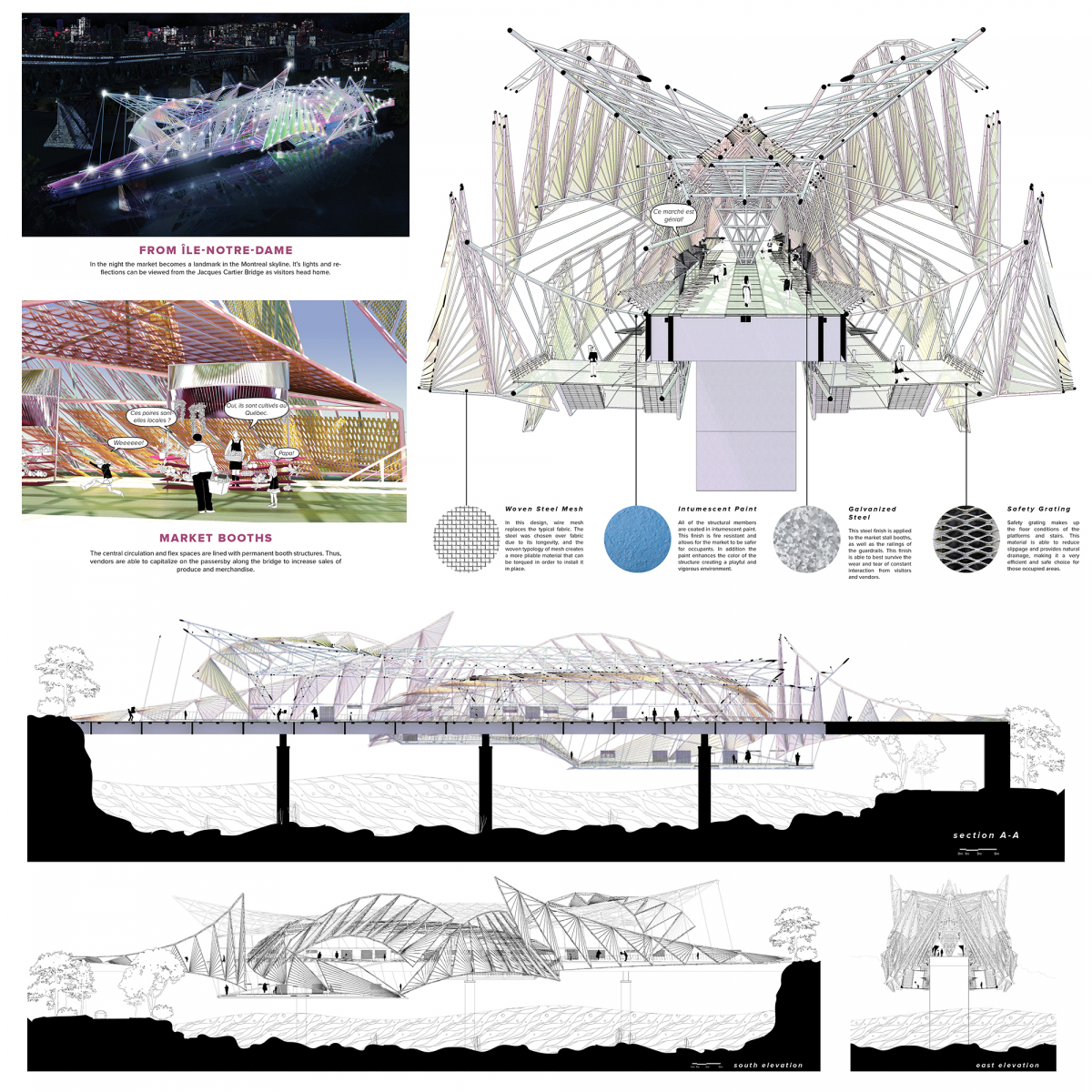 Juror Comments
Marché du Pont receives an honorable mention for the ornamental use of steel. The presentation boards are well composed and reflects a clear understanding of the systems.

In 1863, Mr. Thomas Alcock, the East-Surrey member of parliament, proposed an alternative to the new bridges in the city of London. Mr. Alcock suggested to provide market stalls built into the bridges and to use the rent from these booths to offset the construction expenses for the infrastructure, rather than tolling the public. His idea, which he termed “Bazaar Bridge”, had many merits, allowing lower classes to afford the use of the infrastructure, and providing walkthrough traffic for the sellers. Ultimately, the city did not move forward with this idea. Instead, it was criticized in newspapers and rejected by the public.

Although seemingly revolutionary, incorporating buildings into spanning structures is not new. With the need and desire for multi-purpose infrastructure beginning to re-emerge, new typologies for public spaces need to be re-considered. Commercial programs may be viably incorporated into transit infrastructure. This holds the opportunity to both capitalize on the passage of potential buyers through the space, but also on the profit of rental spaces for local business owners in order to fund the existing infrastructure and others.

The “Marché du Pont” is proposed to be implemented in Montreal, in order to rejuvenate the northern tip of the Île Notre Dame and the Île Saint-Helene. The element of the market, or ‘bazaar’ on the bridge would serve as a community space, serving as a place for sellers throughout Montreal to rent booths to distribute their goods.

In anticipation of Expo 67, Montreal not only created the islands in the center of the city and built pavilions on them, but also built a monorail bridge, the Expo Express, which crossed over the water to the islands which then turned around at “La Ronde”. In the years following the event, much of the architecture and infrastructure was either deconstructed or left in disarray, including the Expo Express, which was largely dismantled barring a portion which became the “Pont de la Concorde” and another bridging portion which remains abandoned in the water.

Although the Île Notre Dame has since become a rowing and racing facility for the Olympics as well as a casino, while Île Saint-Helene houses the biodome and an amusement park, both islands fail to satisfy the everyday needs of the population. Save for special occasions, the islands remain largely deserted, especially the northern portion of Île Notre Dame, which serves as a stockyard.

The implementation of the “Marché du Pont” on the Expo Express bridge remnant is intended to spur the passage of Montrealers between the Île Notre Dame and the Île Saint-Helene, catalyzing not only on beautification and reunification efforts but also the restoration of Expo 67 pavilions and artworks remaining on the site. 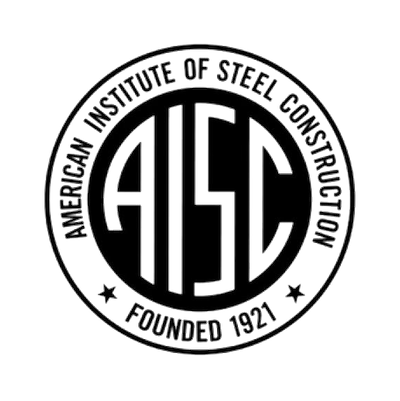