I Made That
Home » AASL » What's in a Name? Design, and Library

What's in a Name? Design, and Library 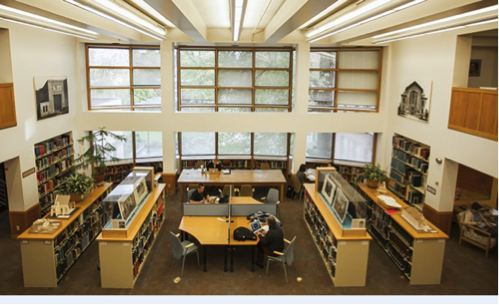 On July 1, 2017, the University of Oregon’s School of Architecture and Allied Arts was renamed the College of Design http://aaa.uoregon.edu/college-of-design  after a collaborative process involving the school’s several departments and other stakeholders.  As Dean Christoph Lindner stated, “As the home of creativity at the UO, the new College of Design will unlock our ability to achieve new levels of success, building on a tradition of innovation dating back over 100 years.  Our new name signals a shared commitment to creative problem-solving, original thinking and real-world engagement.” (1) Although not officially part of the college, the Architecture and Allied Arts Library, the branch library that primarily supports the college’s academic programs, changed its name as well, to the Design Library. Such a changeover is not simple: Signage, web pages, job titles, catalog entries, directories and maps, social media, and book spine labels required revision.

A library collection has been associated with the College of Design since its establishment in the early 20th century, with Portland architect Ellis Fuller Lawrence as the first dean. The first manager of the library collection was a woman whose history deserves better recognition. 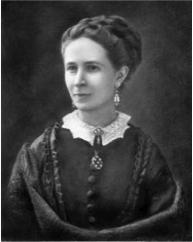 Camilla Leach was born in New York in 1835, and following college, traveled west.  She obtained teaching assignments in French or art in Chicago, then in California’s Bay Area, and in Oregon became head of a private school in Portland.  In 1895, Miss Leach was employed by the University of Oregon in Eugene as a registrar while also serving as the university’s librarian.  The university, only twenty years old at this time, had a small library collection that was relocated several times before the first purpose-built library opened in 1906.  Resistant to retiring, and beloved by faculty and students, Miss Leach worked in the new library until 1914 when, at the age of 79 years, she transferred to the new School of Architecture and Allied Arts, where she served as librarian and clerical assistant for the next ten years. In his moving commemoration of the respected Miss Leach, who died in 1930, Dean Lawrence noted that she was in the process of translating Auguste Racinet’s L’Ornement Polychrome (Paris, 1869-73) for the benefit of the students.

Today, the Racinet volume can still be found among the collections of today’s Design Library http://library.uoregon.edu/aaa/index.html , which in 1992 was the focus of an expansion of Lawrence Hall, the home of the College of Design.  Occupying three floors, the library’s sunlit spaces and seating arrangements provide a welcoming environment for users. A hallmark of the space is a two-story reading room named for Marion Dean Ross, the first chair of the Art History department, whose bequest created an endowment dedicated to the acquisition of rare works that state funding could not afford.  The Ross fund allowed an enhancement of a collection of rare books given by donors over the years.

Library staff have informally named a smaller reading room after Camilla Leach. In addition to enabling study and research, this room is used to present to eager audiences selections from the library’s collection of artist’s books, rare books, and other artifacts.  If Miss Leach returned, she would recognize some of these rare materials, but would regard most fondly the architecture student drawings http://archiveswest.orbiscascade.org/ark:/80444/xv39794  dating from the founding of the college, and preserved throughout the years by her dedicated successors.

(1)    Announcing the New College of Design, Around the O, April 17, 2017, https://around.uoregon.edu/content/uos-new-college-design-will-put-focus-creativity