#rarebookfriday: Systematizing an Approach to Social Media to Reach a Targeted Audience


Architecture libraries and their librarians provide a wealth of services and expertise, but have you ever wondered what some of their strategies are to disseminate this information? Since no one library or librarian is the same, outreach approaches are similarly diverse. One strategy, employed in the Architecture Library at the University of Notre Dame, is to promote collections and services through the use of social media. Many architecture libraries have a Facebook page, Instagram and/or Twitter accounts, with many more blogging, creating online exhibits, and interacting online with patrons in a myriad of ways. Starting in the 2011-2012 academic year, under my direction, the Architecture Library sought to develop a coherent social media strategy. The first step in this process was to determine who exactly our audience would be. Once I understood who I wanted to reach, I could start developing a systematic approach to effectively promote the library and its collections. 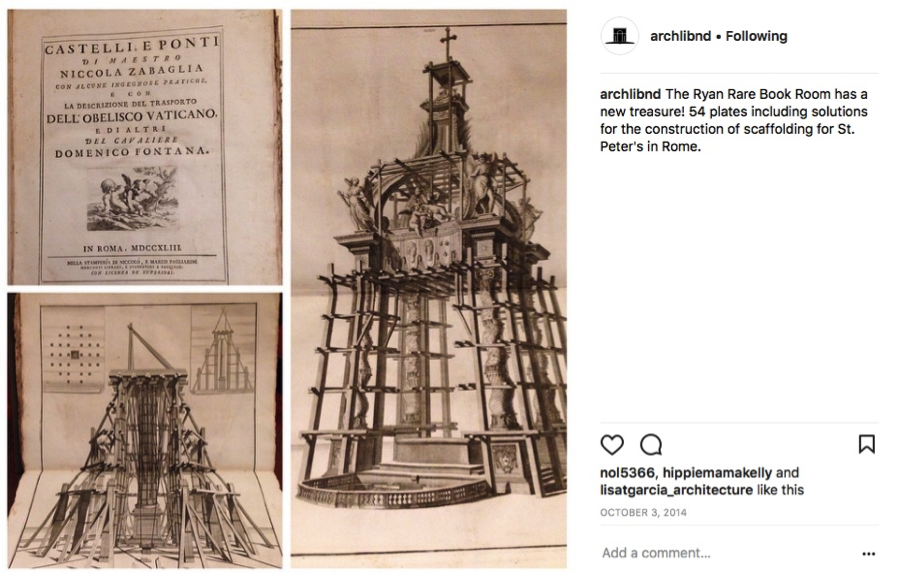 New Book Acquisition, October 3, 2014.
At some point, before I joined the Architecture Library, a Facebook account was created, however, it was no longer being used and did not have many connections. My first step was to create a fresh new Architecture Library page and start posting. While our page started to slowly gain followers, the numbers were not where I wanted them to be. What was helpful, though, was seeing that most of our followers were not our regular faculty and student patrons, but instead consisted of alums and people interested in the School of Architecture who were not on campus regularly. It was important for me to realize that our students and faculty were already engaging with our collection physically, so they did not need to spend time engaging with us virtually. 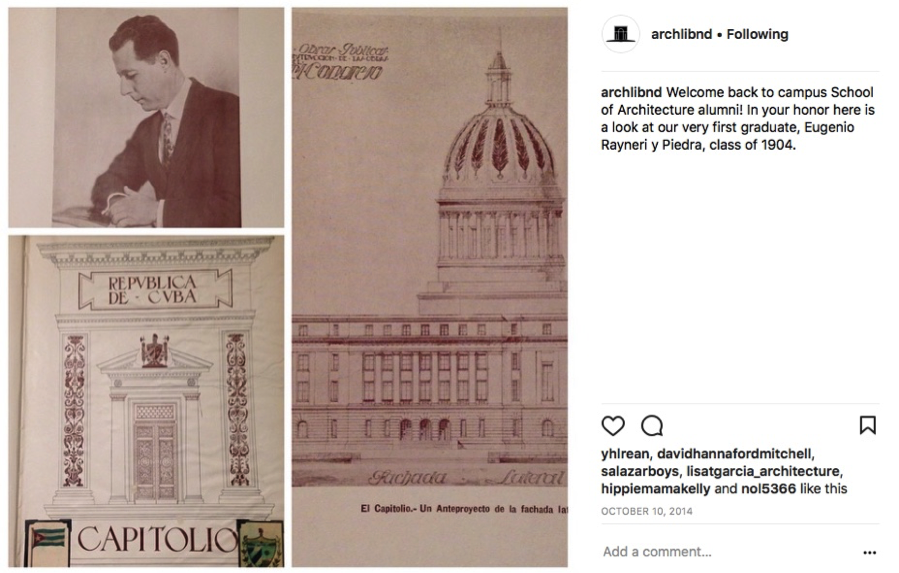 In the summer of 2014, after a few years of Facebook activity, the Architecture Library joined Instagram and Twitter. Based on the literature related to successful social media strategies and according to the School of Architecture’s Director of Communications, it was clear to me that regularly posting helps grow a following. That being said, posting too frequently could also have a negative impact and overwhelm users, causing them to ignore or unfollow accounts. Since our library collection and staff is relatively small, with all of the social media posting falling into my workload, I decided to set myself a moderate task of posting once a week. Since I spend Fridays at our circulation desk, I have worked a social media post into my Friday routine. 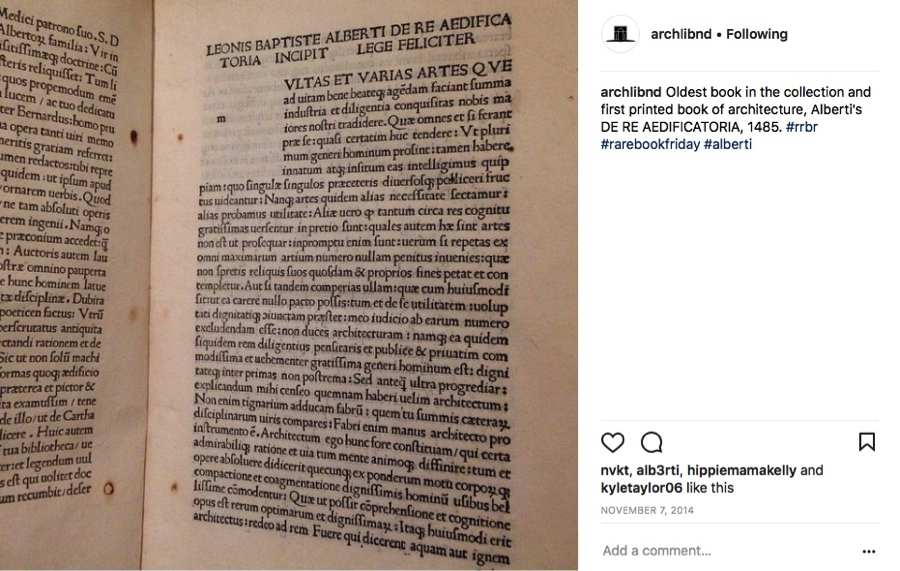 Architecture is a very visual discipline, so Instagram is my primary mode of social media interaction, which I then disseminate to Facebook and Twitter, in order to engage with the most followers. After posting a few different kinds of posts, I decided focus on highlighting and promoting what is truly unique about our library: our rare book collection. Our Ryan Rare Book Room, which contains a significant number of rare and unique texts from 1485 through the 20th century, is open to students, faculty, and the general public. That being said, any patron, regardless of affiliation, would need to make an appointment and request specific titles, so the collection is not browseable like the rest of the library’s holdings. Highlighting these books, therefore, appeals to both our campus patrons and our off-campus admirers. Those on site who are interested in engaging with us on social media are not getting redundant information, but rather, are being introduced to titles housed in the library that they would not find on their own. Alums, colleagues, and other followers are also treated to snippets of our collection, which, should they find themselves on campus, would be outside of their normal access. 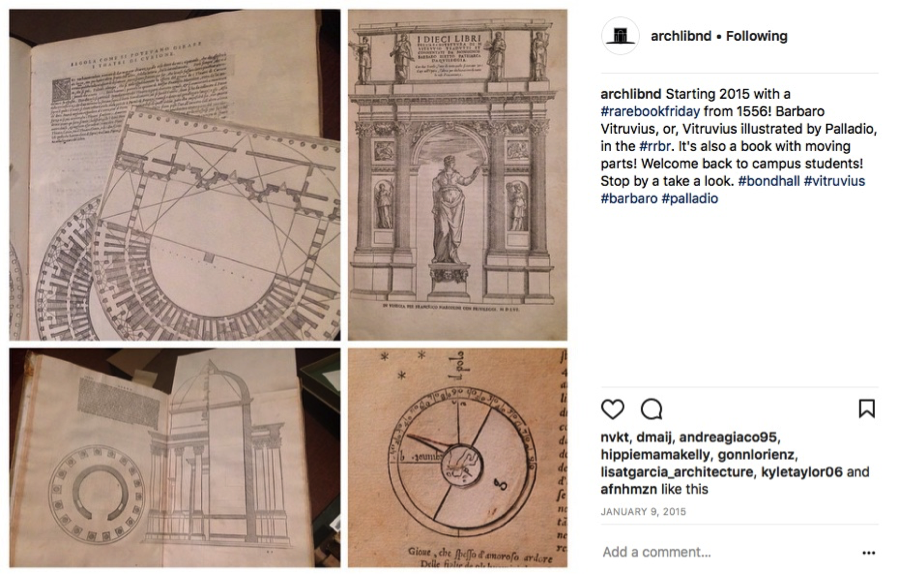 Under the #rarebookfriday I post weekly pictures of titles from our collection. The first few posts wrote themselves, showcasing our most beloved books. In subsequent weeks and over the years, I have tried to tie in posts about what is happening on campus, like reunions, perspective students visiting campus, classes using the collection, other moments in the academic year, and, of course, football rivalries. This platform is also a great way to publicize new titles added to the collection. Increasingly, social media is also a venue for our library to interact publicly with the School of Architecture’s profiles, as we both can share, like, tag, and retweet each other’s posts. I try to have fun with these posts and it certainly seems to be gaining traction, especially on Instagram, with each post accumulating more likes than the last.
Follow us: @ArchLibND (Facebook, Instagram, and Twitter) 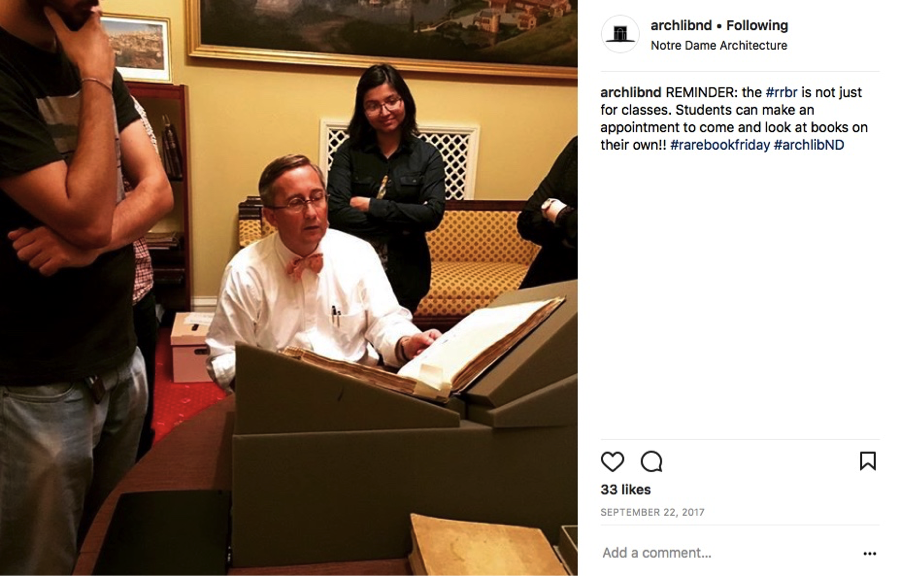 Bucrania from Vignola to tie in with a football game against Texas, September 4, 2015.