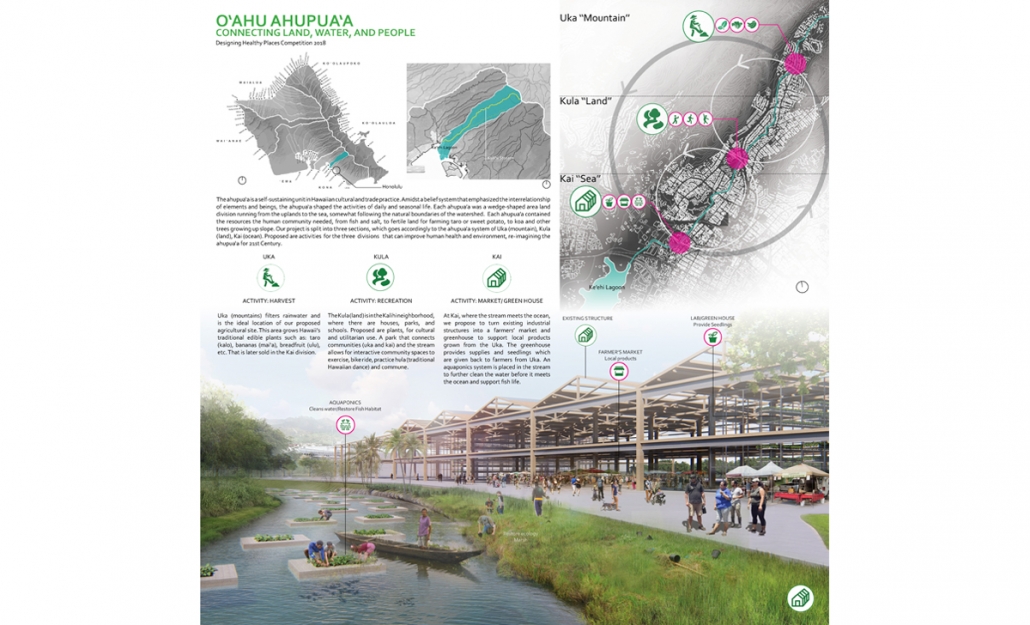 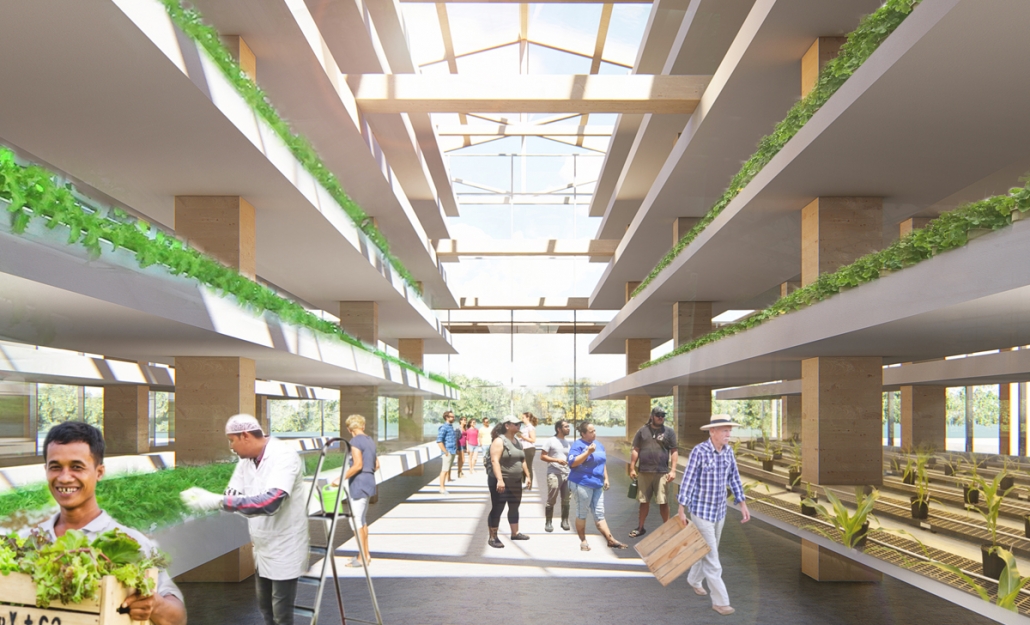 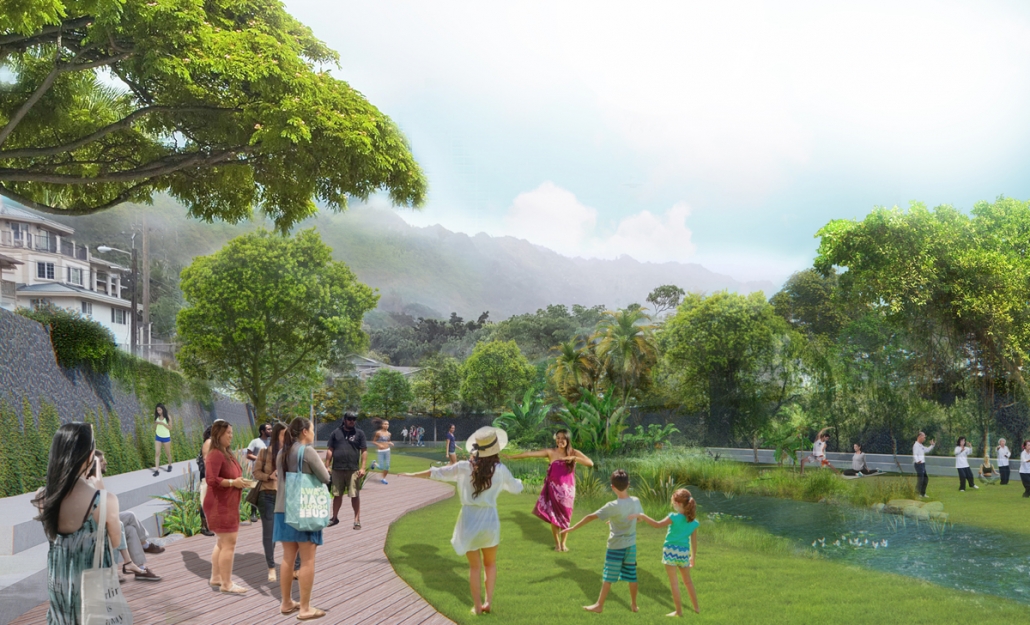 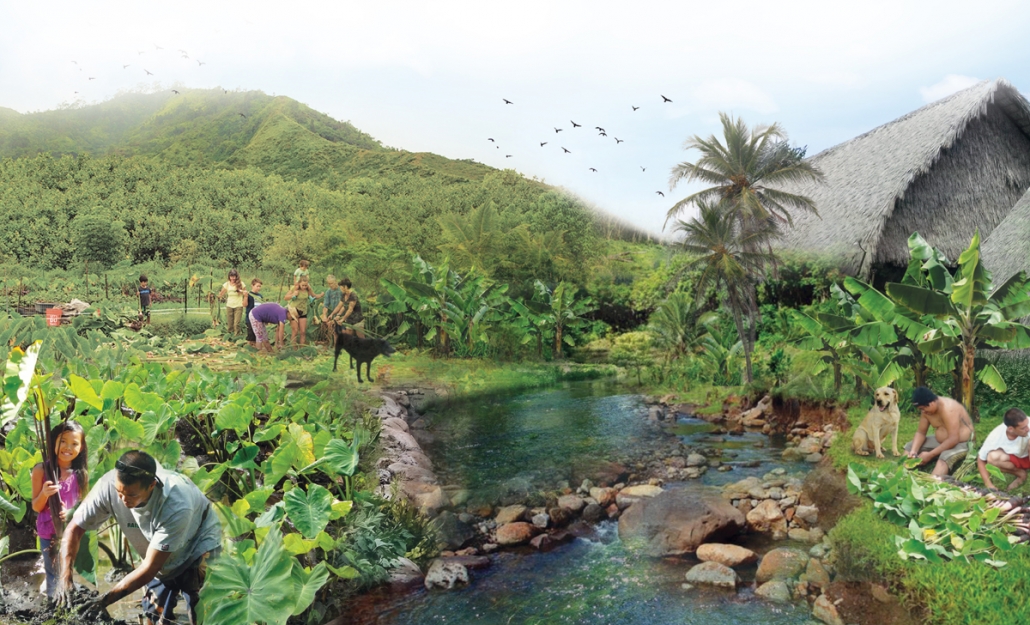 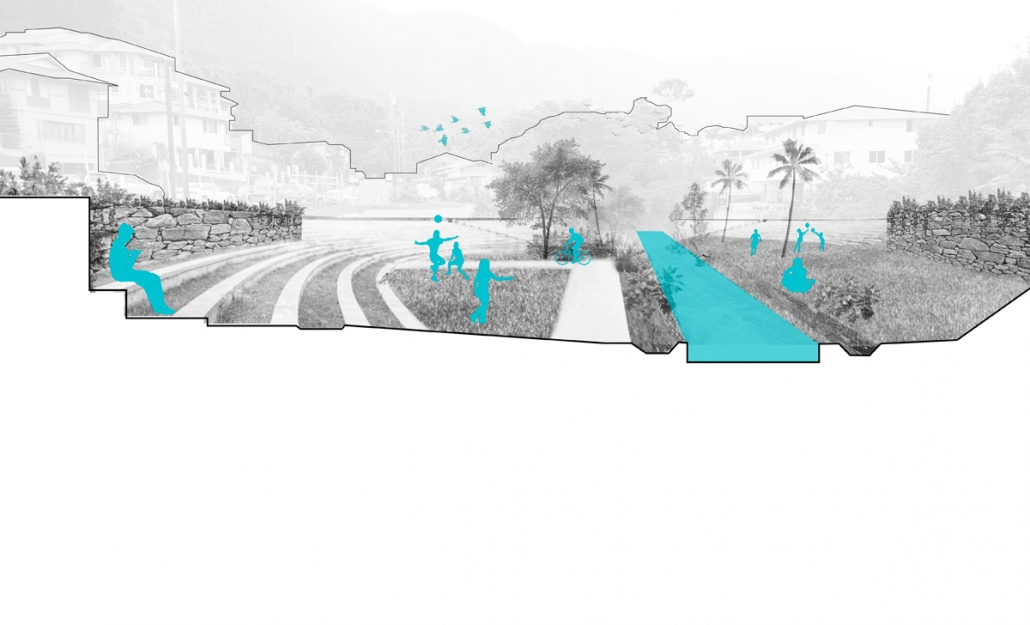 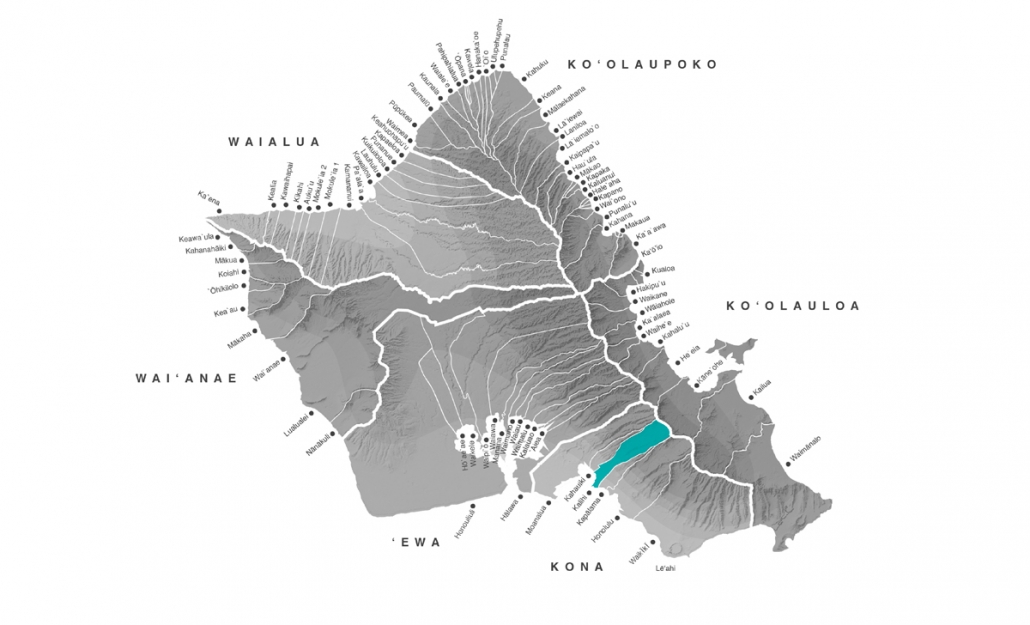 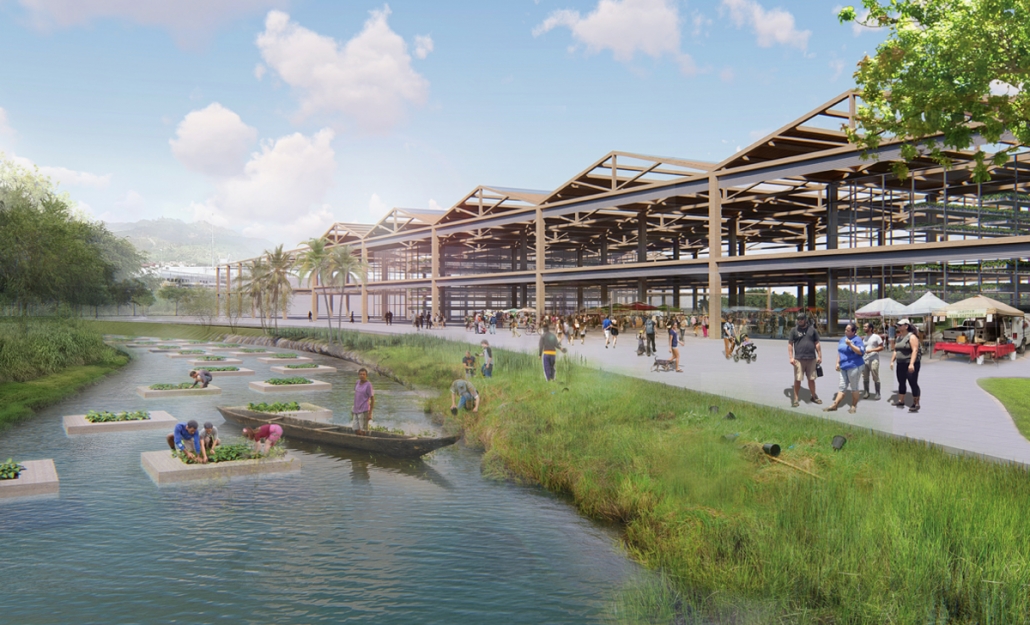 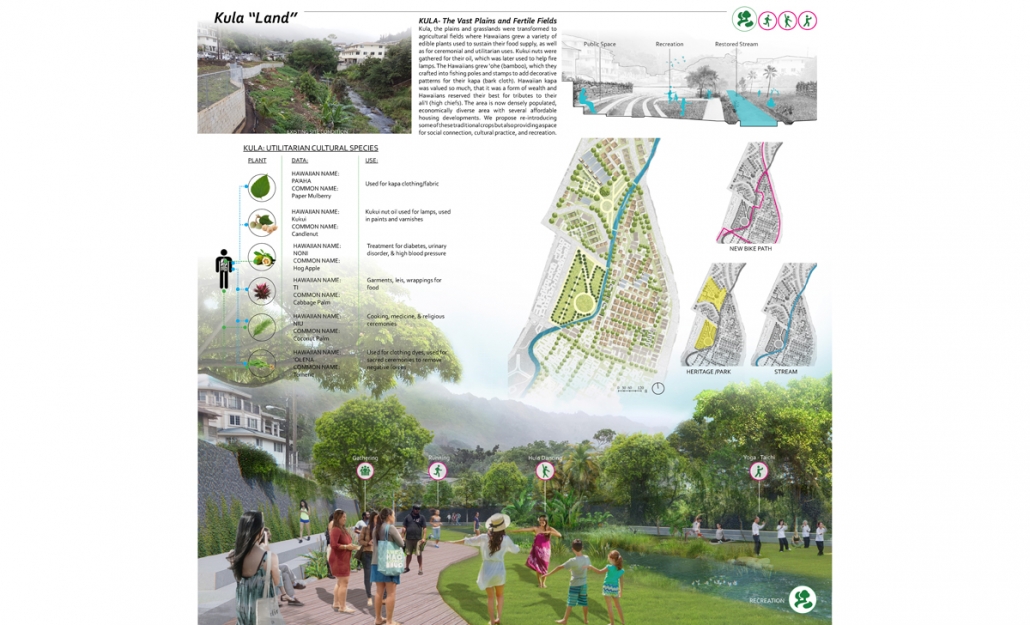 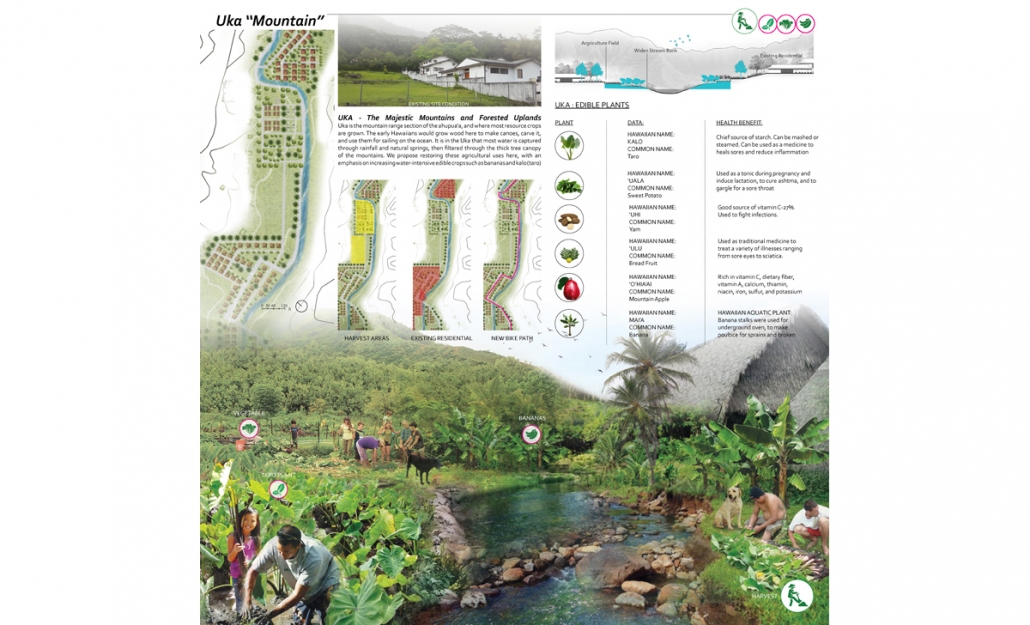 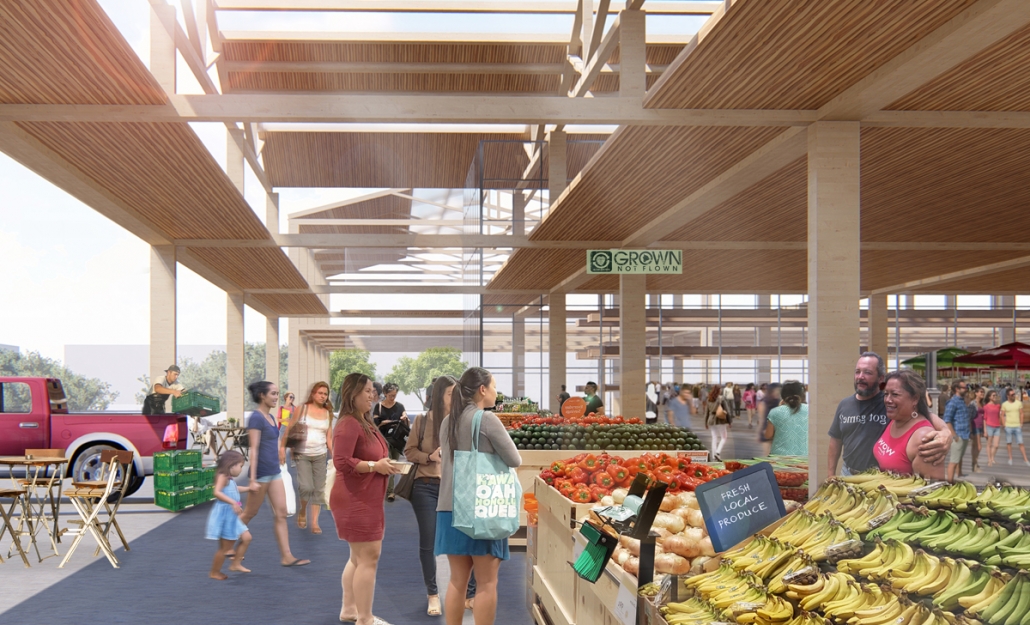 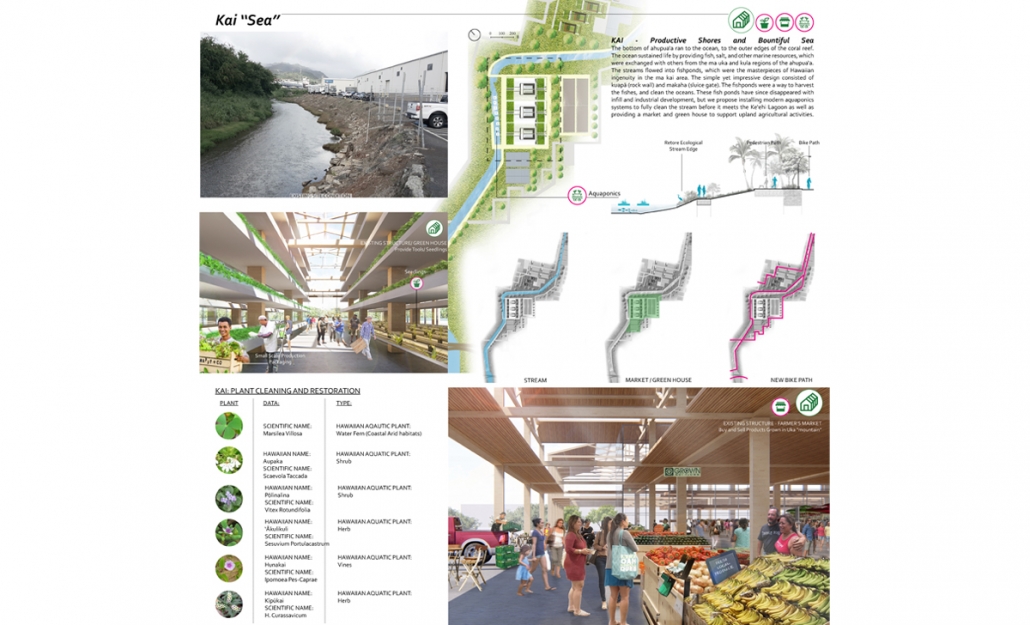 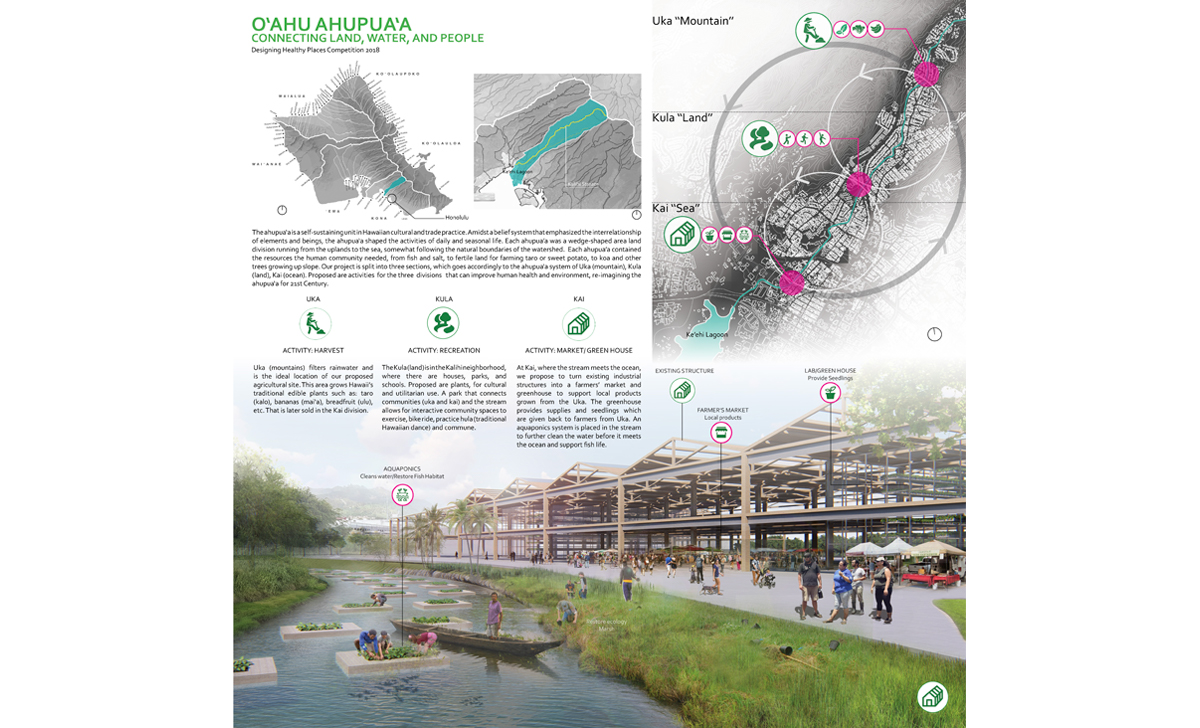 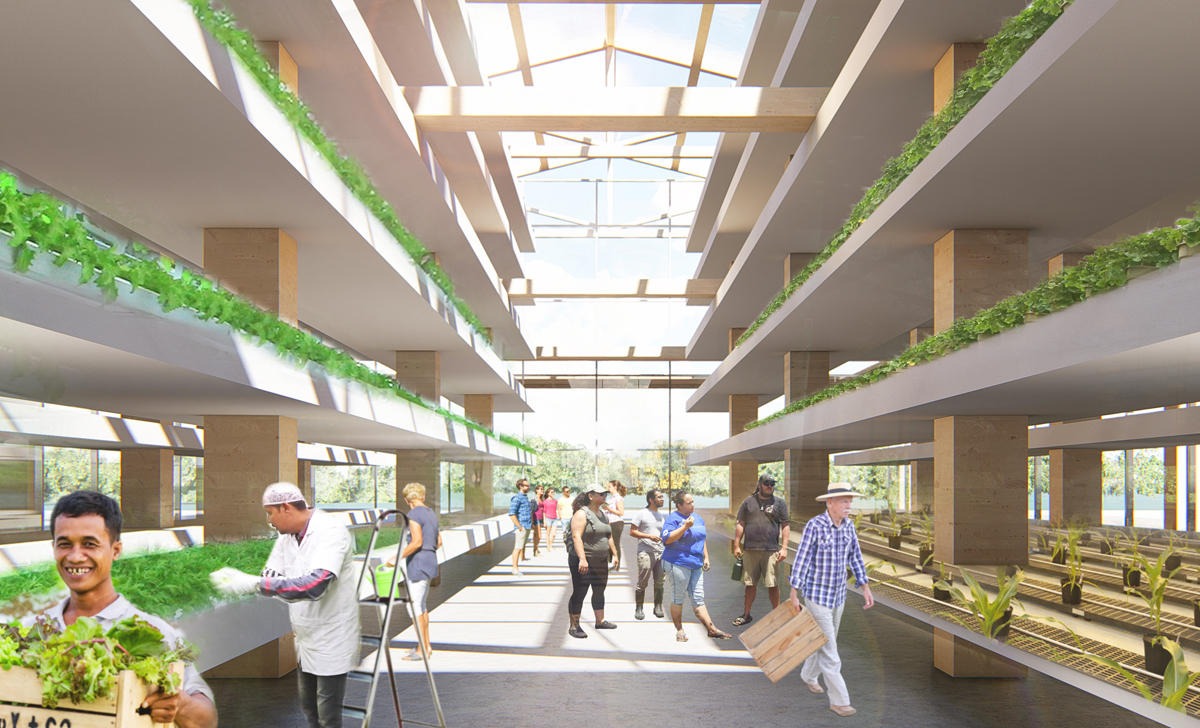 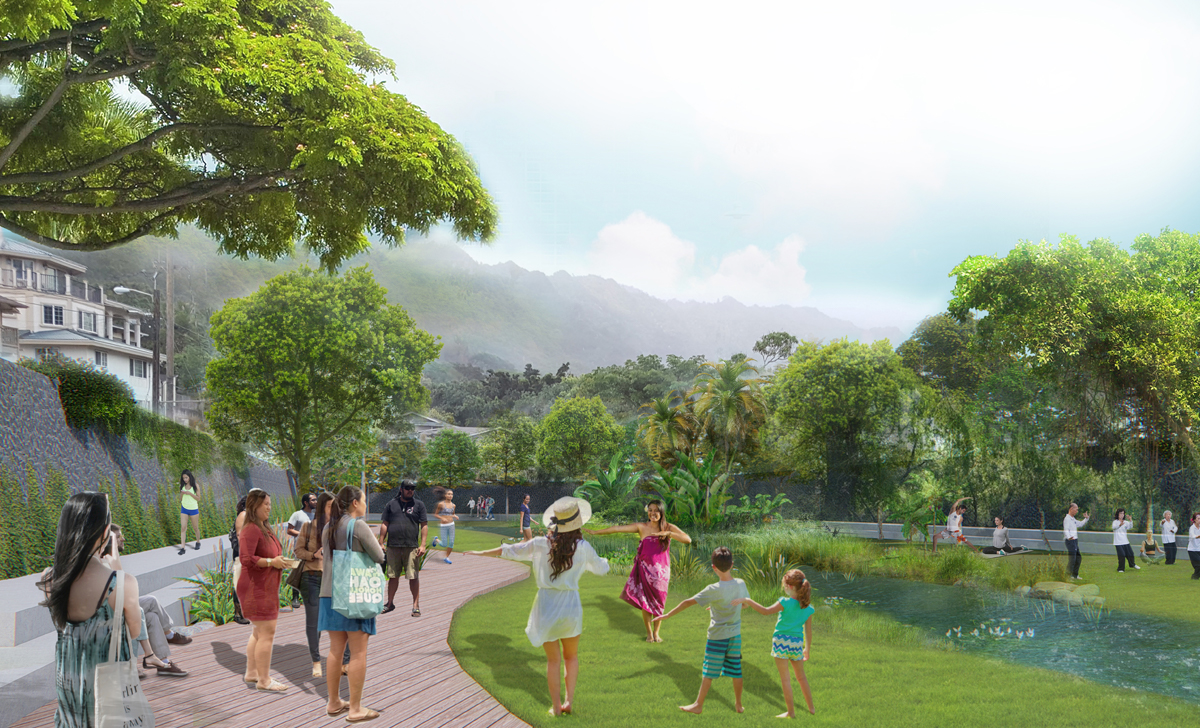 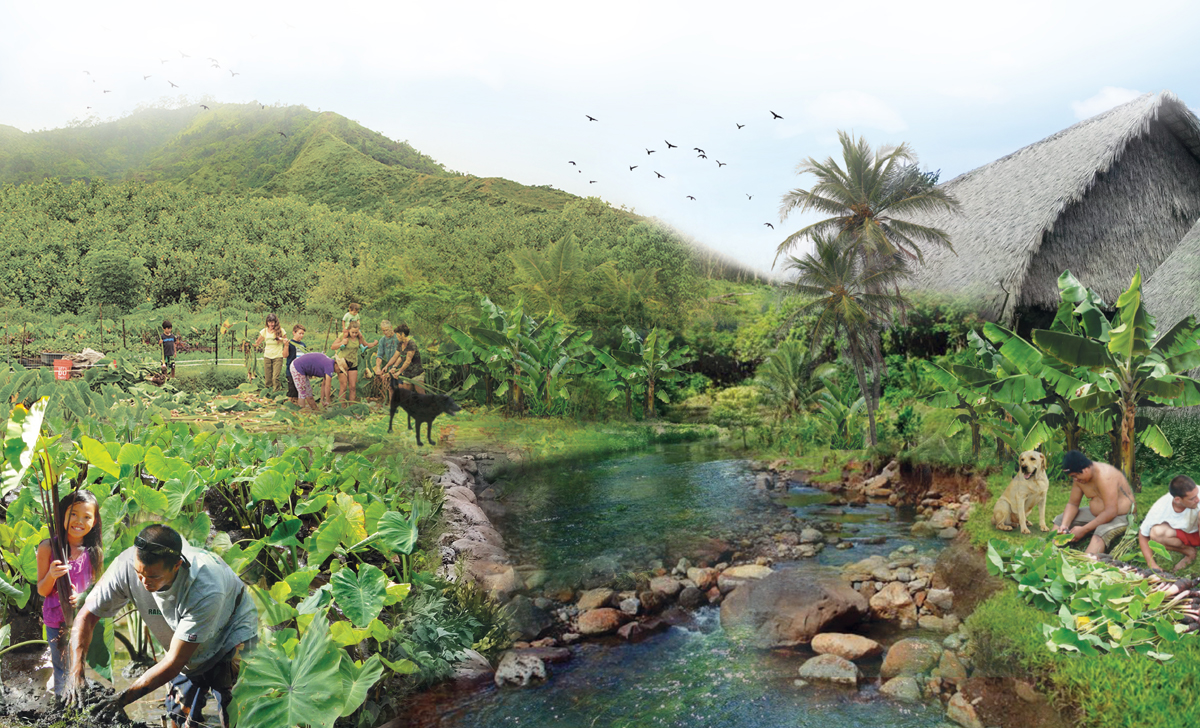 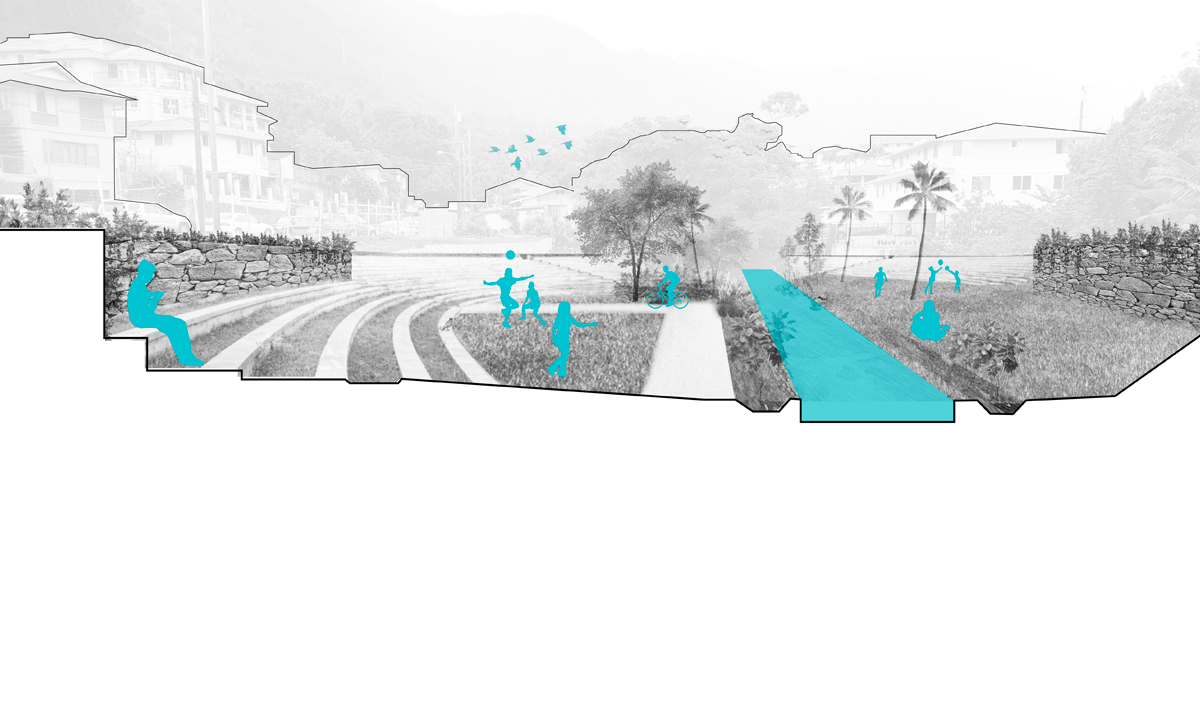 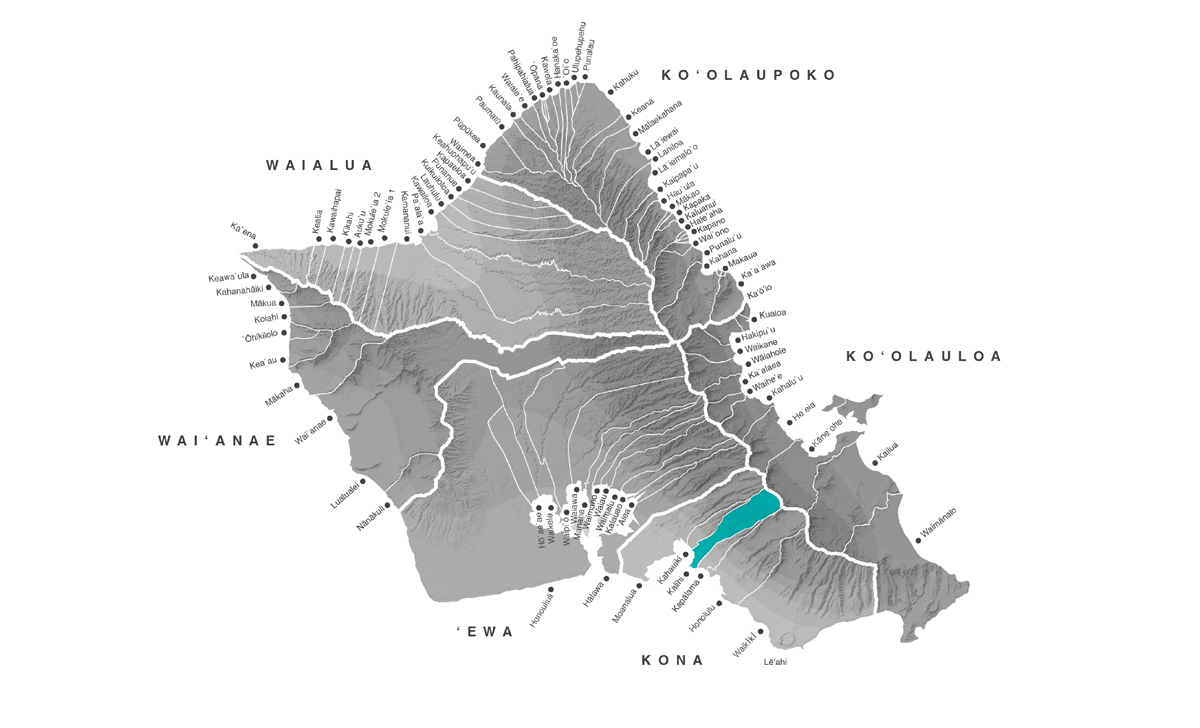 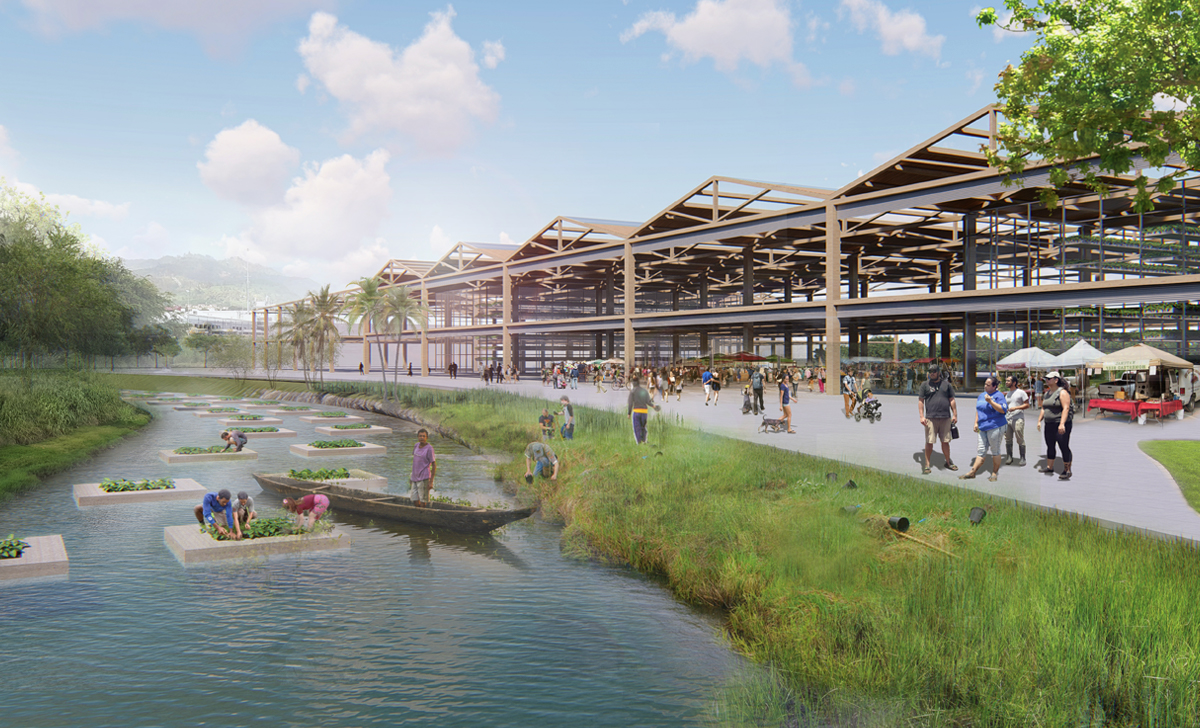 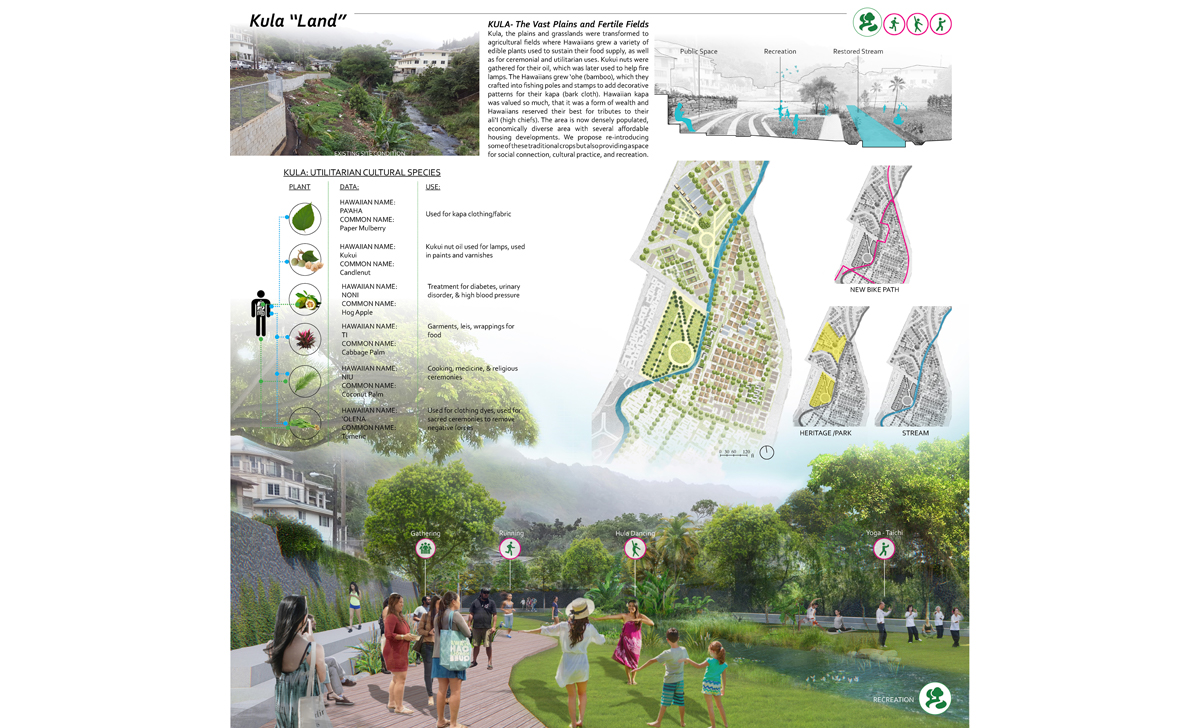 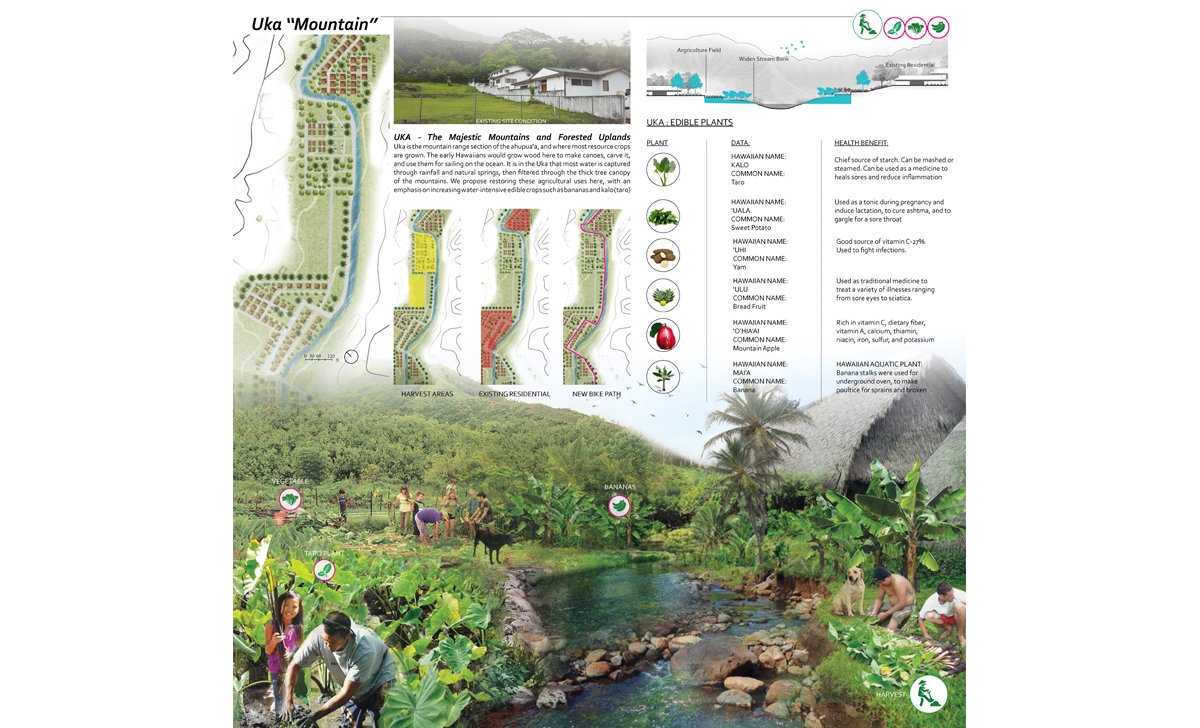 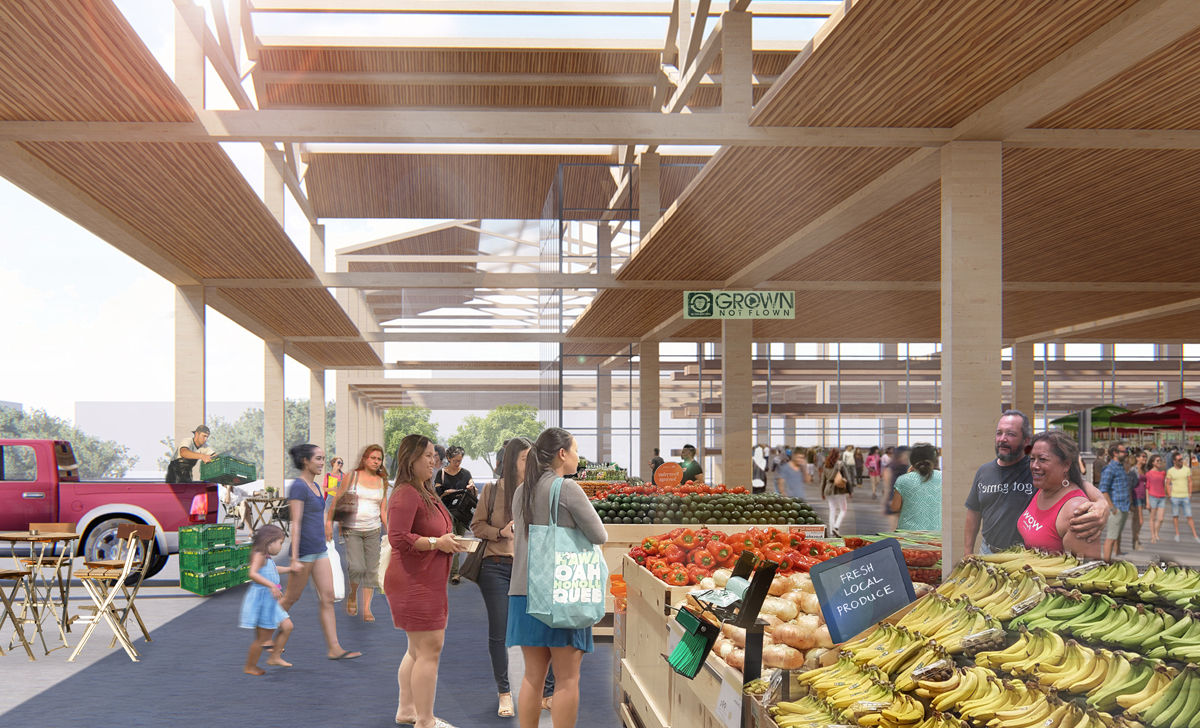 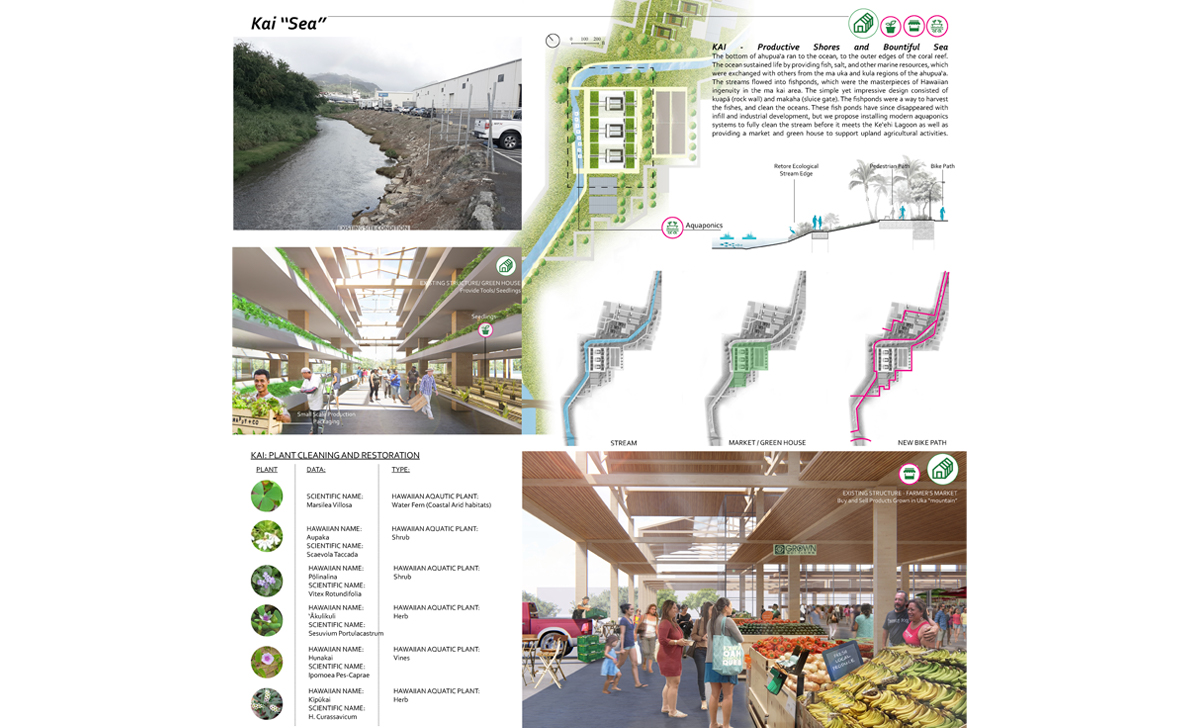 This project intentionally broadens the definition of health to include environmental and cultural elements. Food insecurity is an important social problem and becomes a driver for thinking about architecture and landscape architecture in this project. By reclaiming wetland farming this project is going back to cultural definitions of the land and society’s relationship to the land.

The ahupua‘a is a self-sustaining unit in Hawaiian cultural and trade practice. Amidst a belief system that emphasized the interrelationship of elements and beings, the ahupua‘a shaped the activities of daily and seasonal life. Each ahupua’a was a wedge-shaped area land division running from the uplands to the sea, somewhat following the natural boundaries of the watershed. Each ahupua’a contained the resources the human community needed, from fish and salt, to fertile land for farming taro or sweet potato, to koa and othertrees growing up slope. Our project is split into three sections, which goes accordingly to the ahupua‘a system of Uka (mountain), Kula (land), Kai (ocean). Proposed are activities for the three divisions that can improve human health and environment, re-imagining the ahupua‘a for 21st Century.

At Kai, where the stream meets the ocean, we propose to turn existing industrial structures into a farmers’ market and greenhouse to support local products grown from the Uka. The greenhouse provides supplies and seedlings which are given back to farmers from Uka. An aquaponics system is placed in the stream to further clean the water before it meets the ocean and support fish life.

The bottom of ahupua‘a ran to the ocean, to the outer edges of the coral reef. The ocean sustained life by providing fish, salt, and other marine resources, which were exchanged with others from the ma uka and kula regions of the ahupua‘a. The streams flowed into fishponds, which were the masterpieces of Hawaiian ingenuity in the ma kai area. The simple yet impressive design consisted of kuapā (rock wall) and makaha (sluice gate). The fishponds were a way to harvest the fishes, and clean the oceans. These fish ponds have since disappeared with infill and industrial development, but we propose installing modern aquaponics systems to fully clean the stream before it meets the Ke‘ehi Lagoon as well as providing a market and green house to support upland agricultural activities.

The Kula (land) is in the Kalihi neighborhood,where there are houses, parks, and schools. Proposed are plants, for cultural and utilitarian use. A park that connects communities (uka and kai) and the stream allows for interactive community spaces to exercise, bike ride, practice hula (traditional Hawaiian dance) and commune.

Kula, the plains and grasslands were transformed to agricultural fields where Hawaiians grew a variety of edible plants used to sustain their food supply, as well as for ceremonial and utilitarian uses. Kukui nuts were gathered for their oil, which was later used to help fire lamps. The Hawaiians grew ‘ohe (bamboo), which they crafted into fishing poles and stamps to add decorative patterns for their kapa (bark cloth). Hawaiian kapa was valued so much, that it was a form of wealth and Hawaiians reserved their best for tributes to their ali‘I (high chiefs). The area is now densely populated, economically diverse area with several affordable housing developments. We propose re-introducing some of these traditional crops but also providing a space for social connection, cultural practice, and recreation.

Uka (mountains) filters rainwater and is the ideal location of our proposed agricultural site. This area grows Hawaii’s traditional edible plants such as: taro (kalo), bananas (mai‘a), breadfruit (ulu), etc. That is later sold in the Kai division.

Uka is the mountain range section of the ahupua‘a, and where most resource crops are grown. The early Hawaiians would grow wood here to make canoes, carve it, and use them for sailing on the ocean. It is in the Uka that most water is captured through rainfall and natural springs, then filtered through the thick tree canopy of the mountains. We propose restoring these agricultural uses here, with an emphasis on increasing water-intensive edible crops such as bananas and kalo (taro).