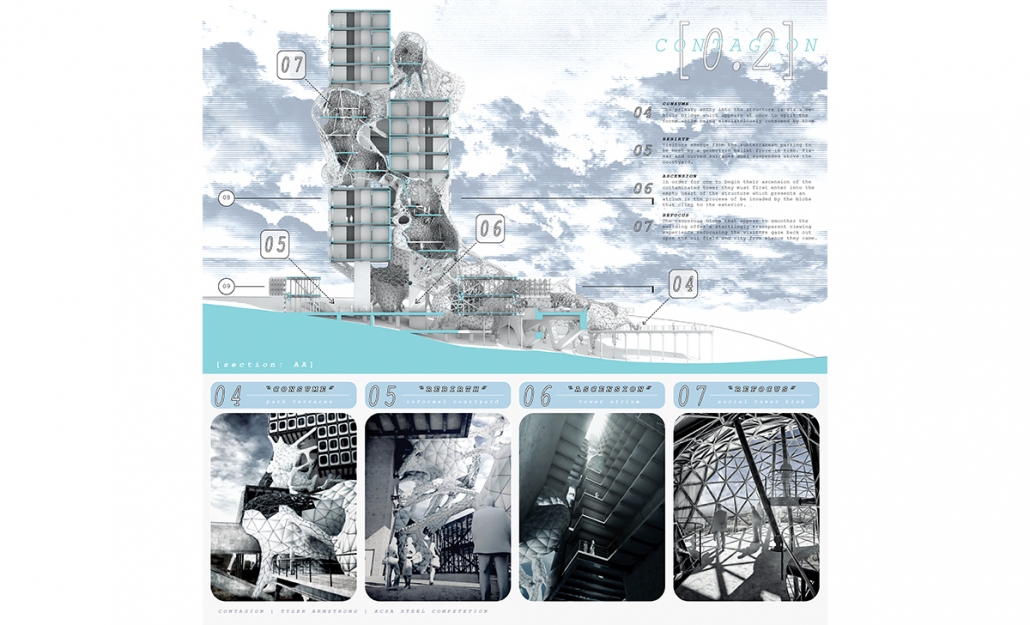 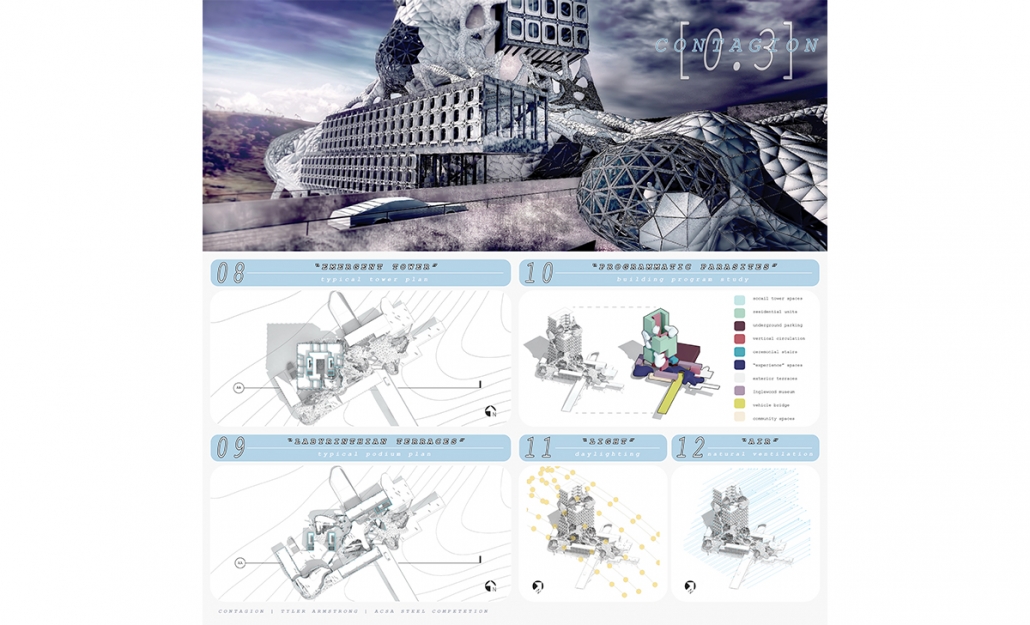 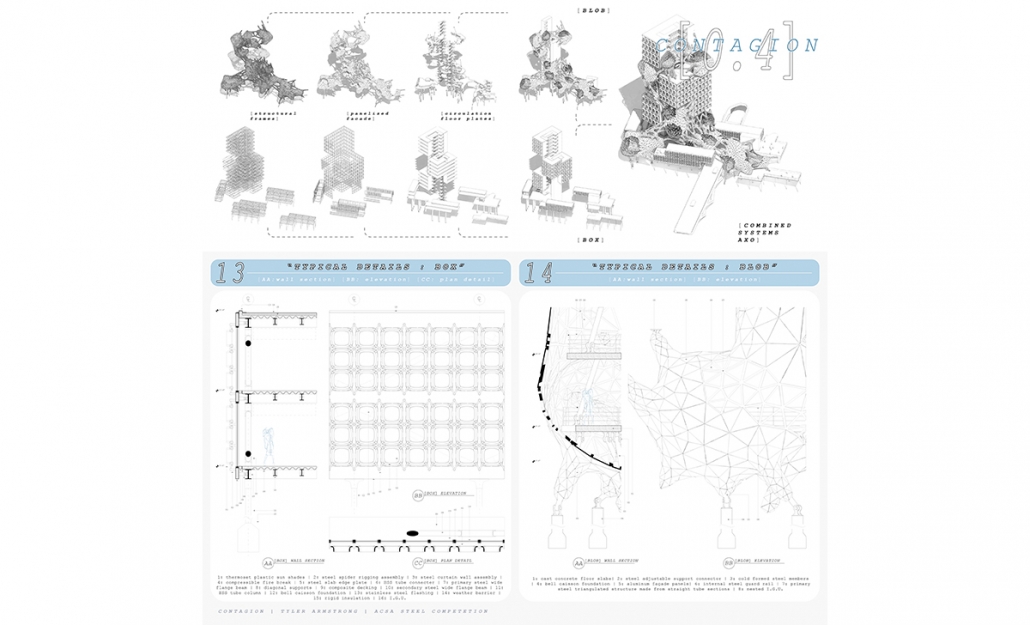 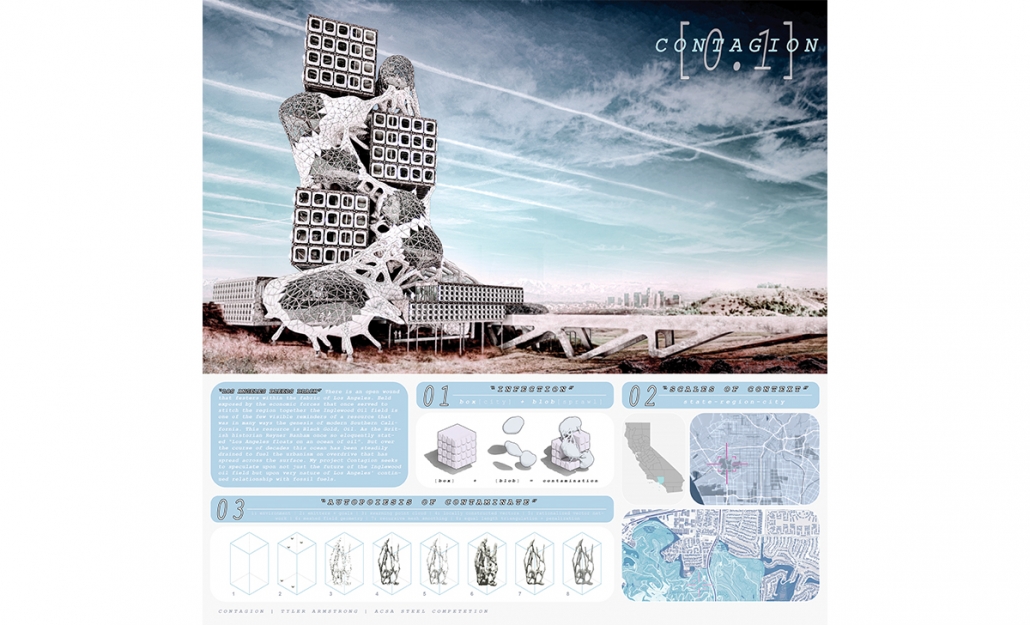 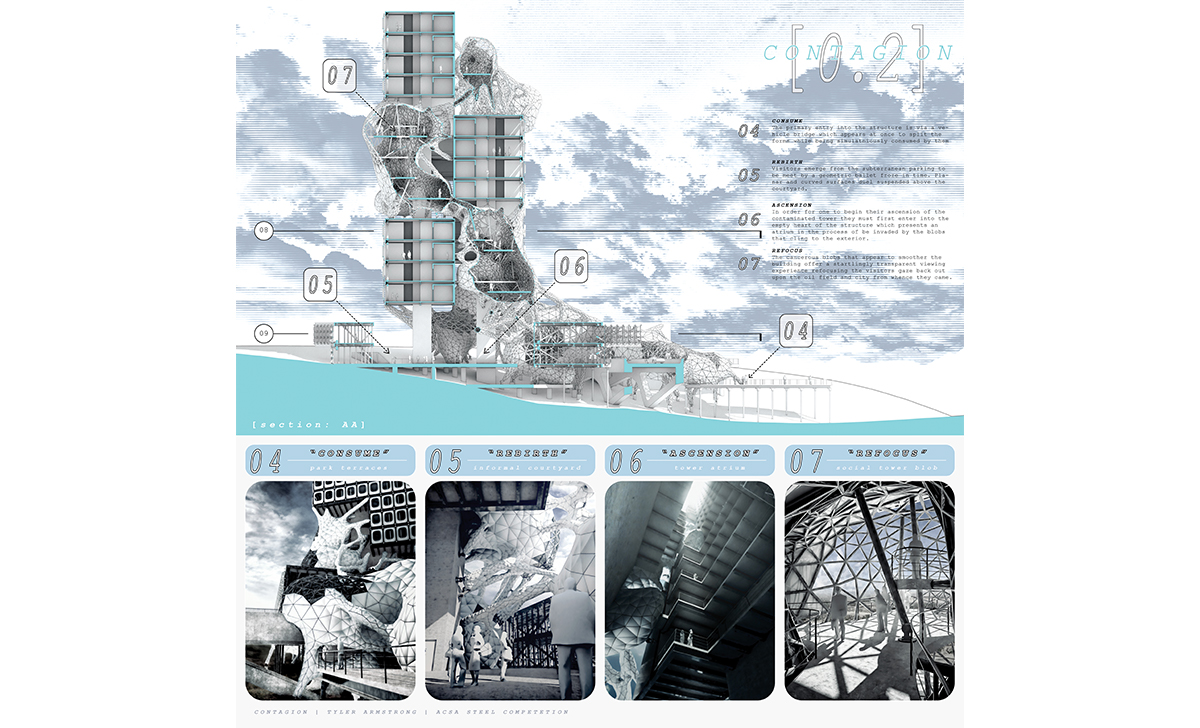 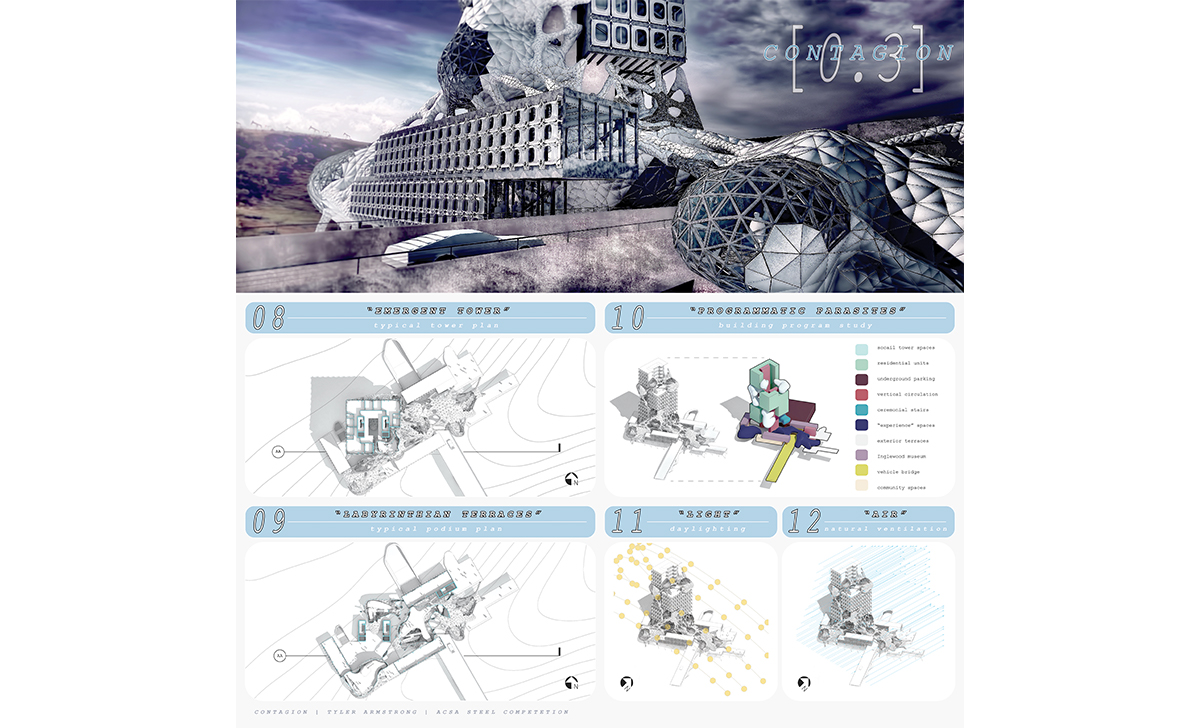 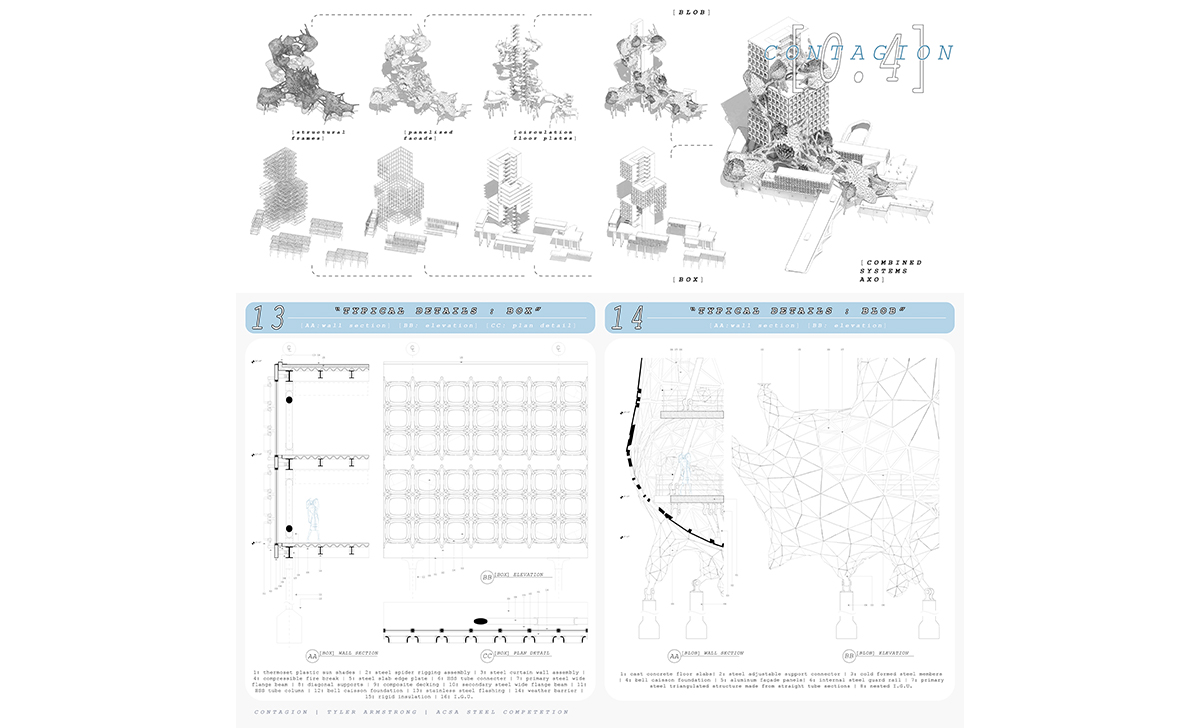 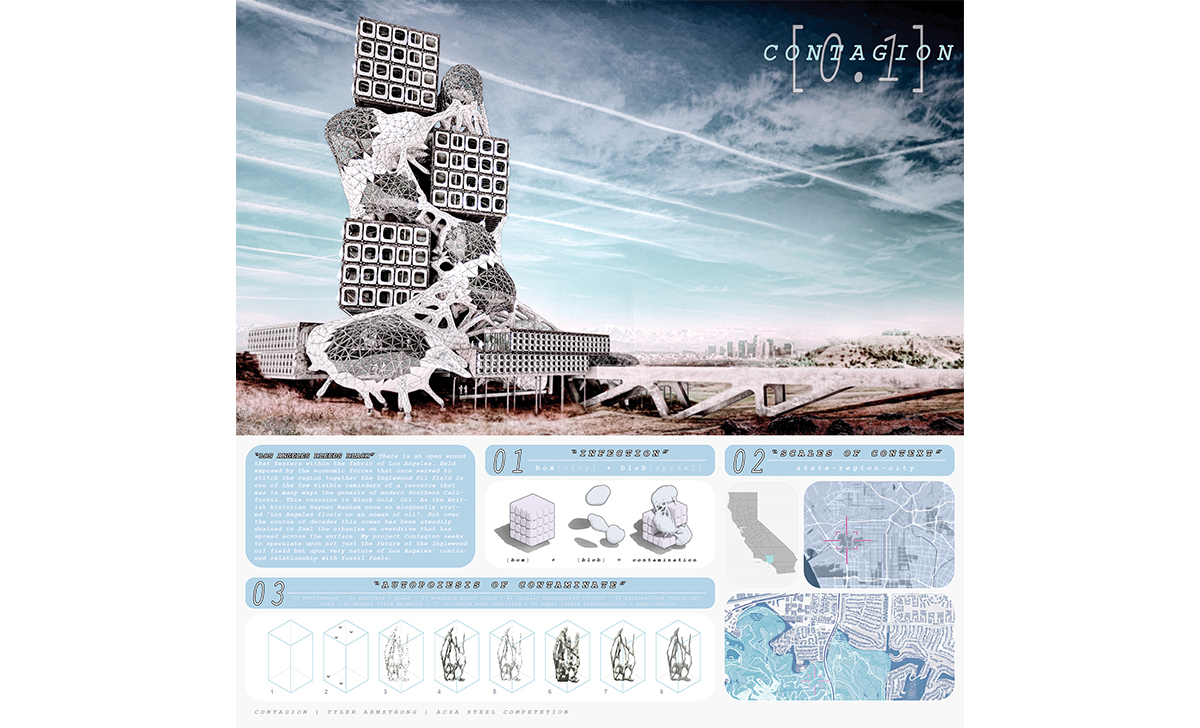 There is an open wound that festers within the fabric of Los Angeles. Held exposed by the economic forces that once served to stitch the region together the Inglewood Oil field is one of the few visible reminders of a resource that was in many ways the genesis of modern Southern California. This resource is Black Gold, Oil. As the British historian Reyner Banham once so eloquently stated “Los Angeles floats on an ocean of oil”. But over the course of decades this ocean has been steadily drained to fuel the urbanism on overdrive that has spread across the surface. My project Contagion seeks to speculate upon not just the future of the Inglewood oil field but upon the very nature of Los Angeles’ continued relationship with fossil fuels. The primary design vectors that were explored within the project are the notions of a deferred authorship through computational design, architectural succession within the landscape of Los Angeles and the built form as a kind of cultural palimpsest.

The idea of a deferment of authorship was formulated in response to the decentralized architecturally spontaneous nature of Southern California. The fluid forms are a result of a generative algorithm that uses swarming logics to simulate the growth of moss like blob structures over rigid boxes. The next design driver, architectural succession is tied to the rather linear nature of Southern California development. From virgin landscapes, to resource extraction and finally a kind of decentralized urbanism in which the land is carved up between numerous areas of dense wealth and sprawling poverty. This issue of the social and economic fragmenting of Los Angeles through architectural means is simultaneously accepted and rejected by the project which like a palimpsest possesses elements both freshly written and half erased by time.