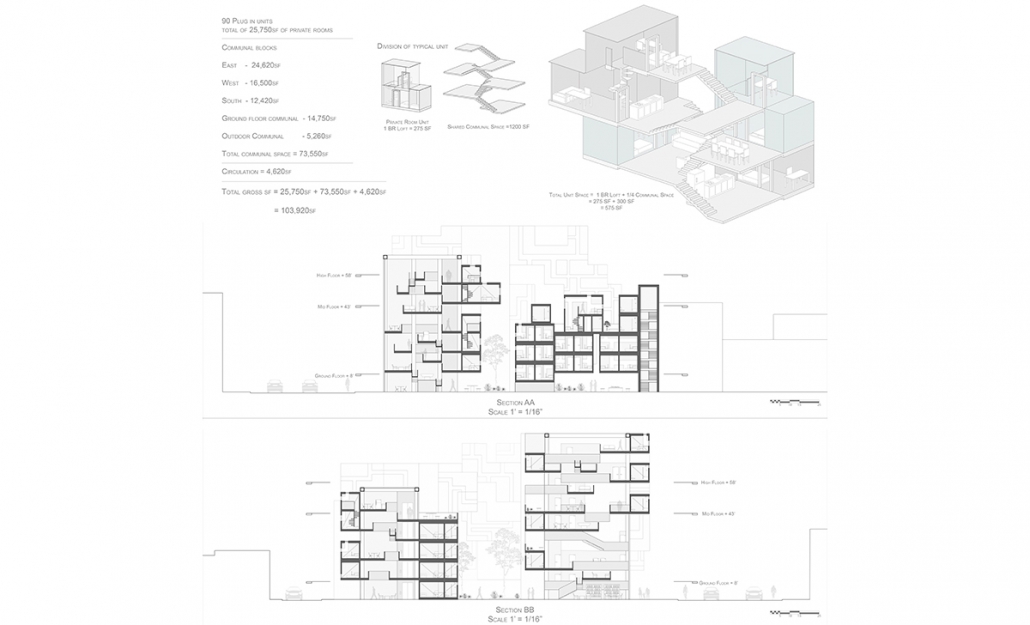 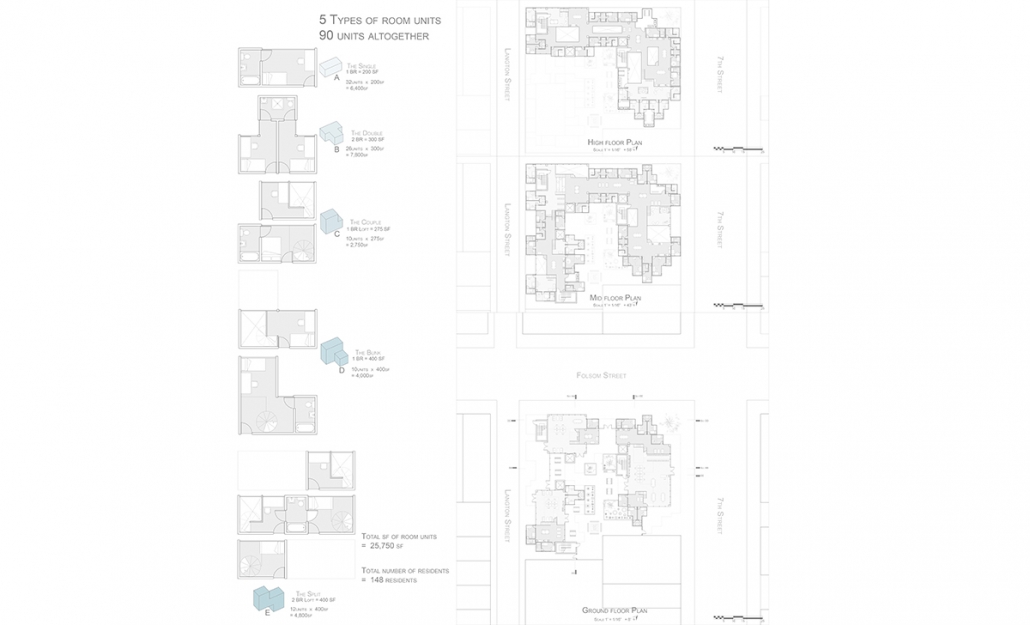 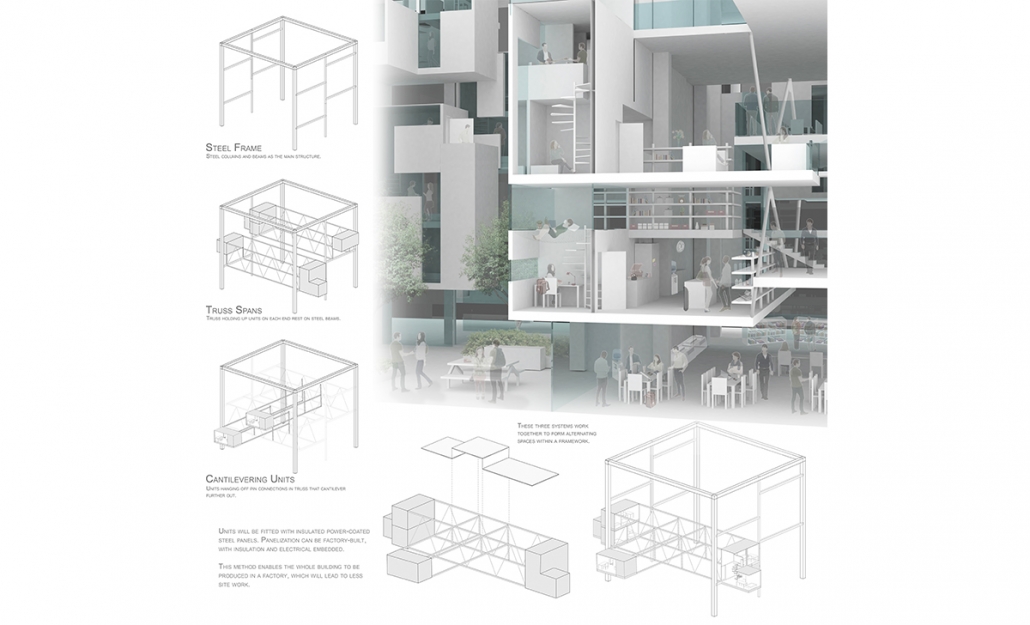 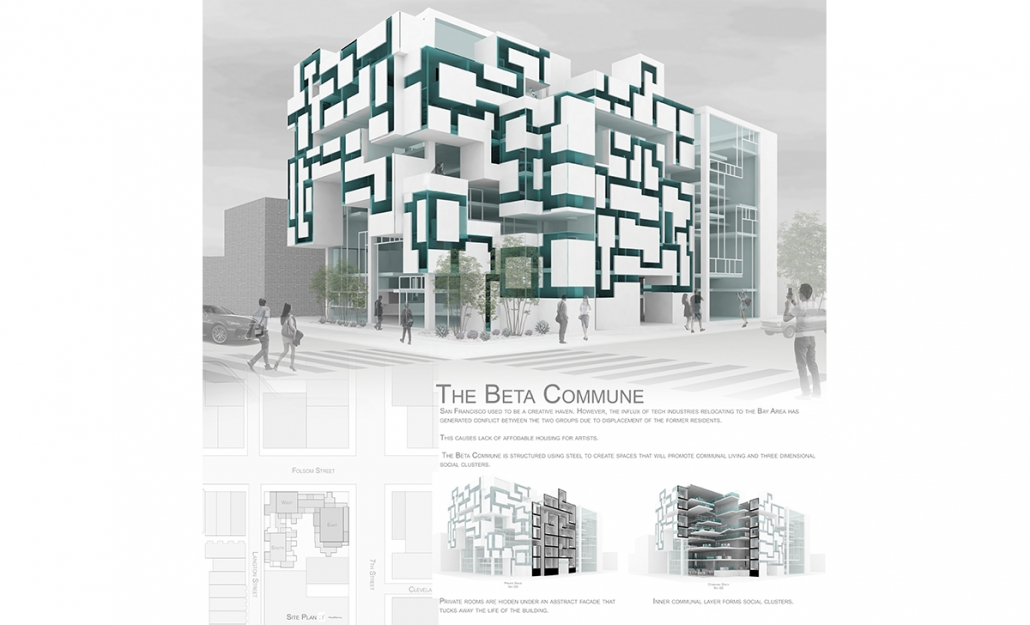 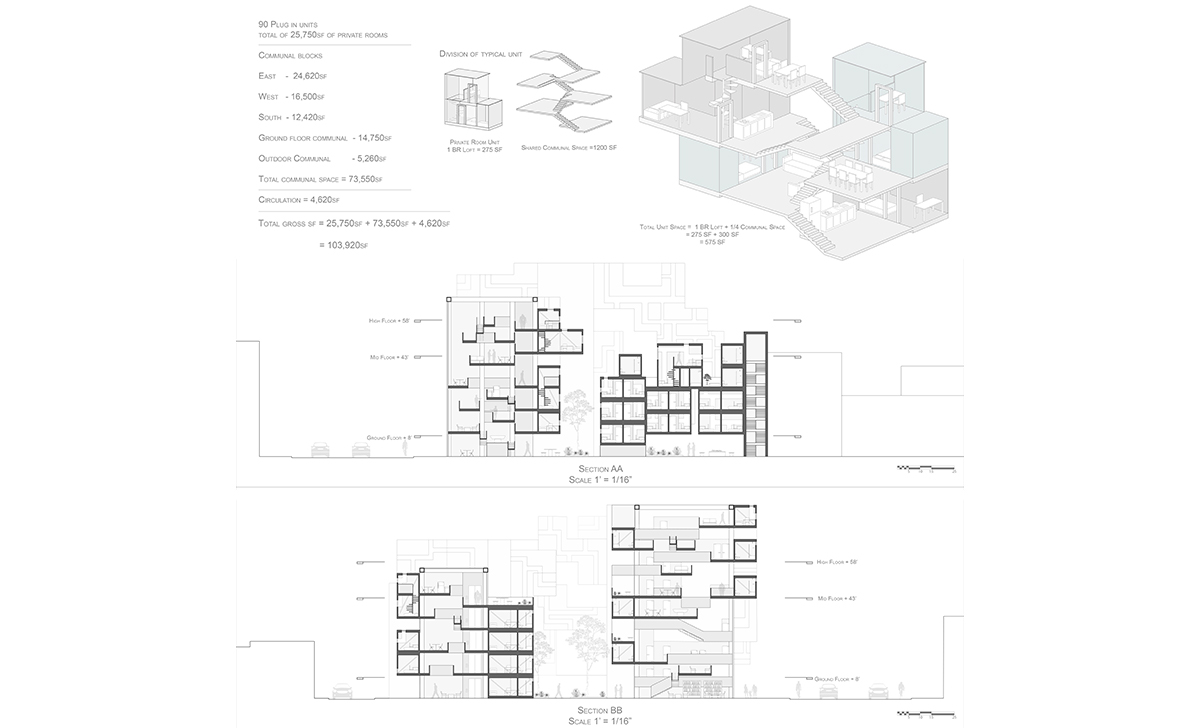 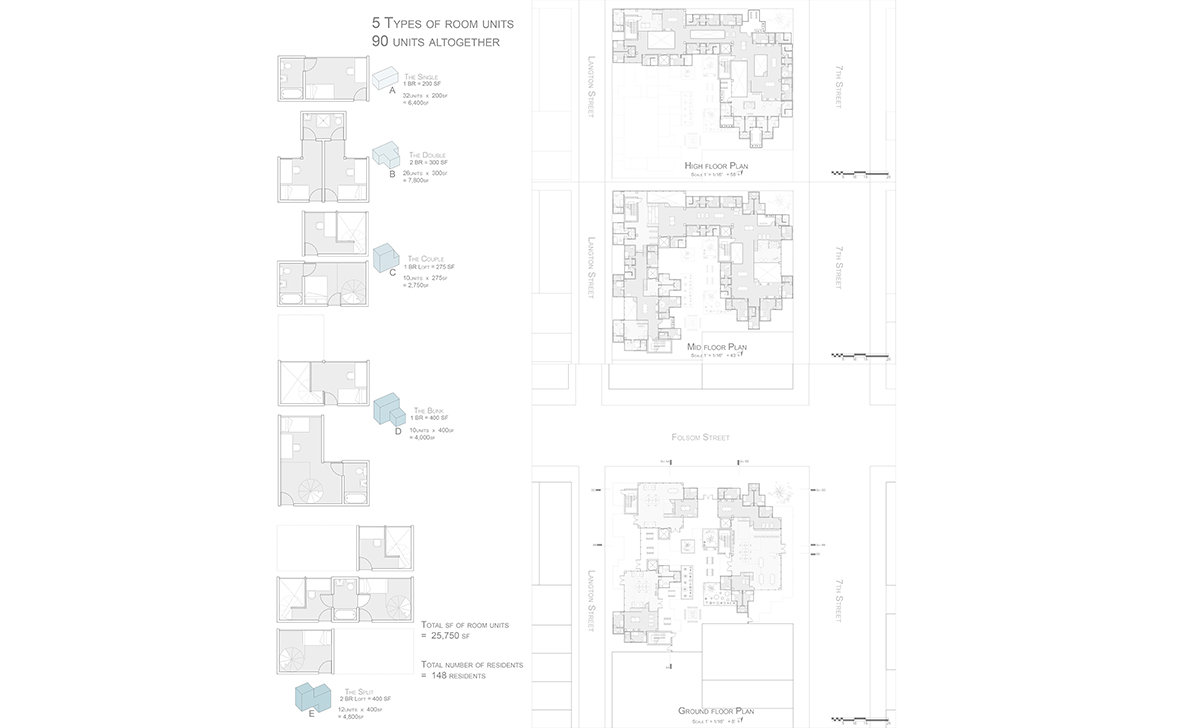 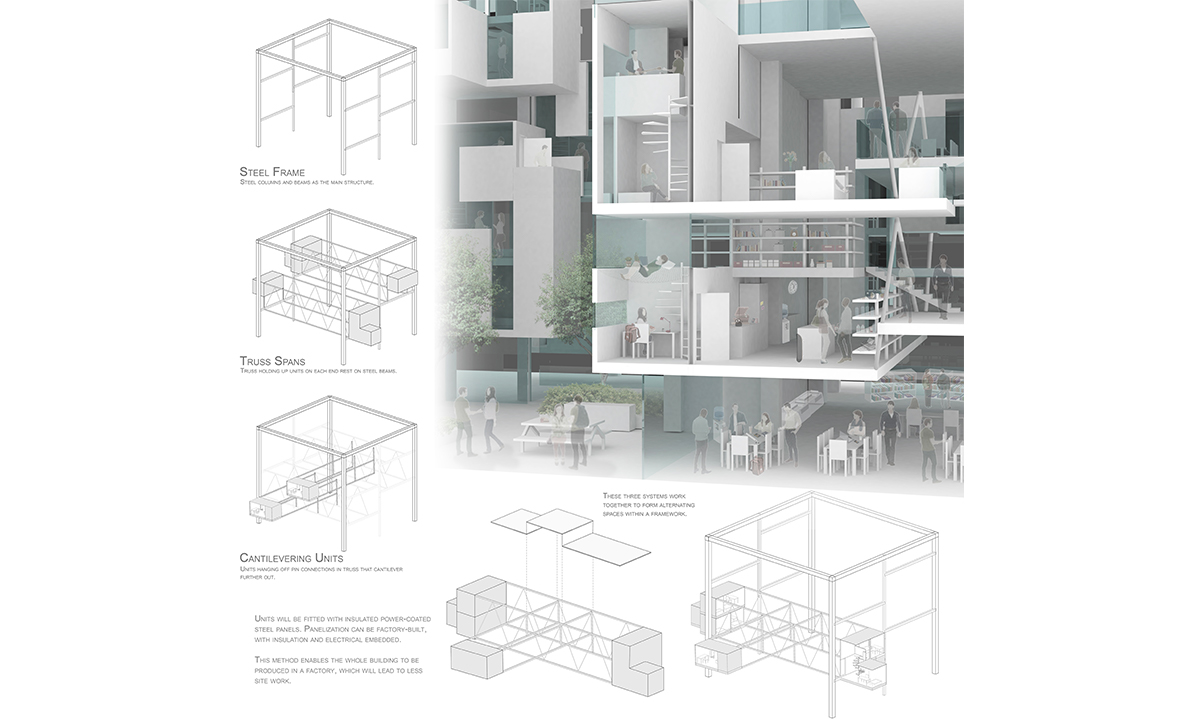 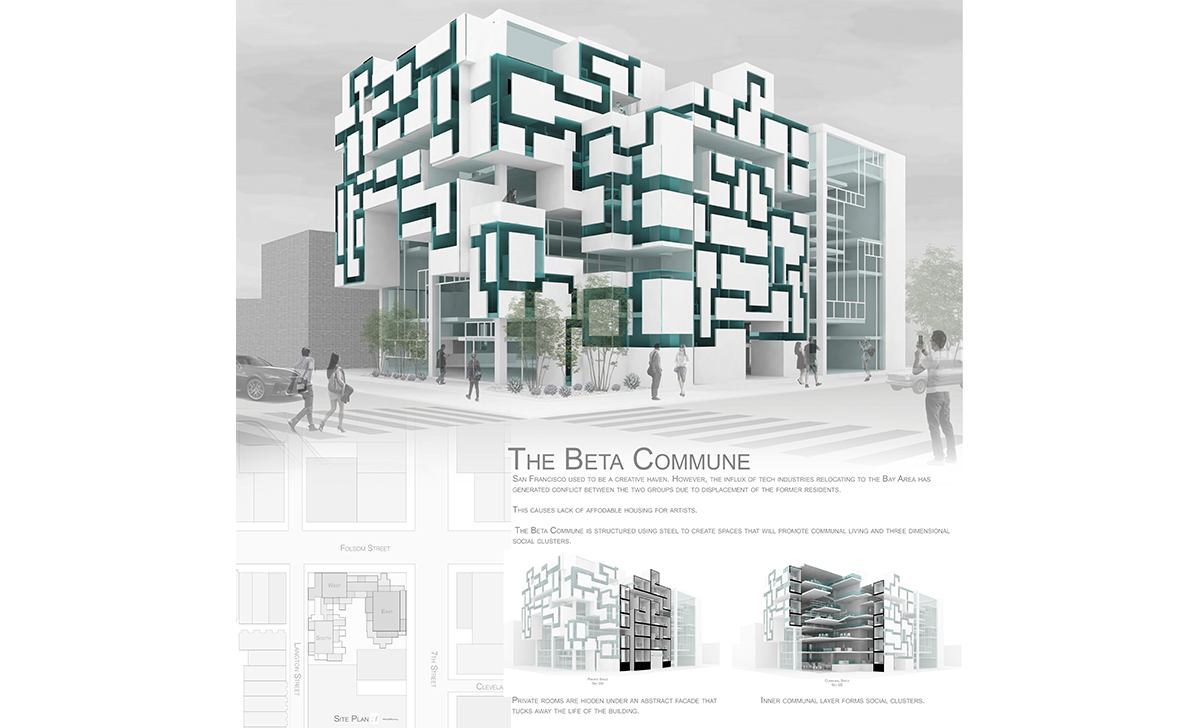 San Francisco used to be a creative haven. However, the influx of tech industries relocating to the Bay Area has generated conflict between the two groups due to displacement of the former residents. This calls for a need of more affordable housing options for artists. The Beta Commune tackles this by offering communal living between the two.

The formal design was developed by using case studies of clustering systems for housing, such as Moshe Safie’s Habitat 67 and Kisho Kurokawa’s Capsule Tower. Instead of typical concrete structures that these projects explore, the Beta Commune introduces an innovative use of steel.

The Beta Commune is structured to hold communal spaces with individual room units. Five types of minimal units will plug into a steel frame with long span truss running throughout the communal spaces.These trusses then hold up cantilevering plug-in units on perpendicular sides of the building. The steel structure would form large open spaces that are sectionally divided. A five foot difference produces visual boundaries for social spaces that occur in a three dimensional cluster.

There would be a total of 90 units that range from 200 to 400 square feet. This would generate a total of 148 residents, as some units cater to two inhabitants.

The habitation of the communal spaces would include routine activities, such as living, dining, and kitchen spaces. The ground floor holds a social space for the community to interact with residents. The abstract building skin tucks away the life of the building and relates to protrusions generated by modern bay windows that exist urban fabric of the current neighborhood.

The Beta Commune has the potential to be recreated at larger scales with the same steel fabrication method.