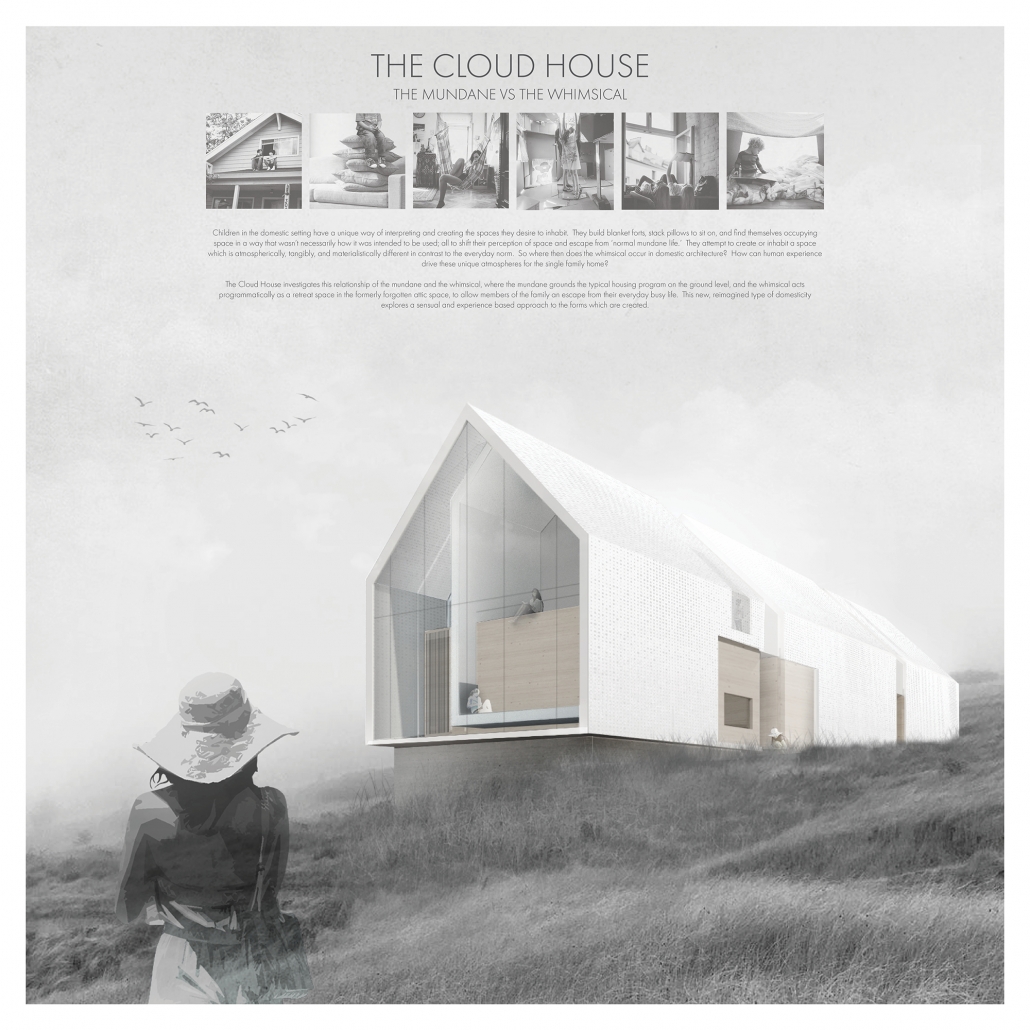 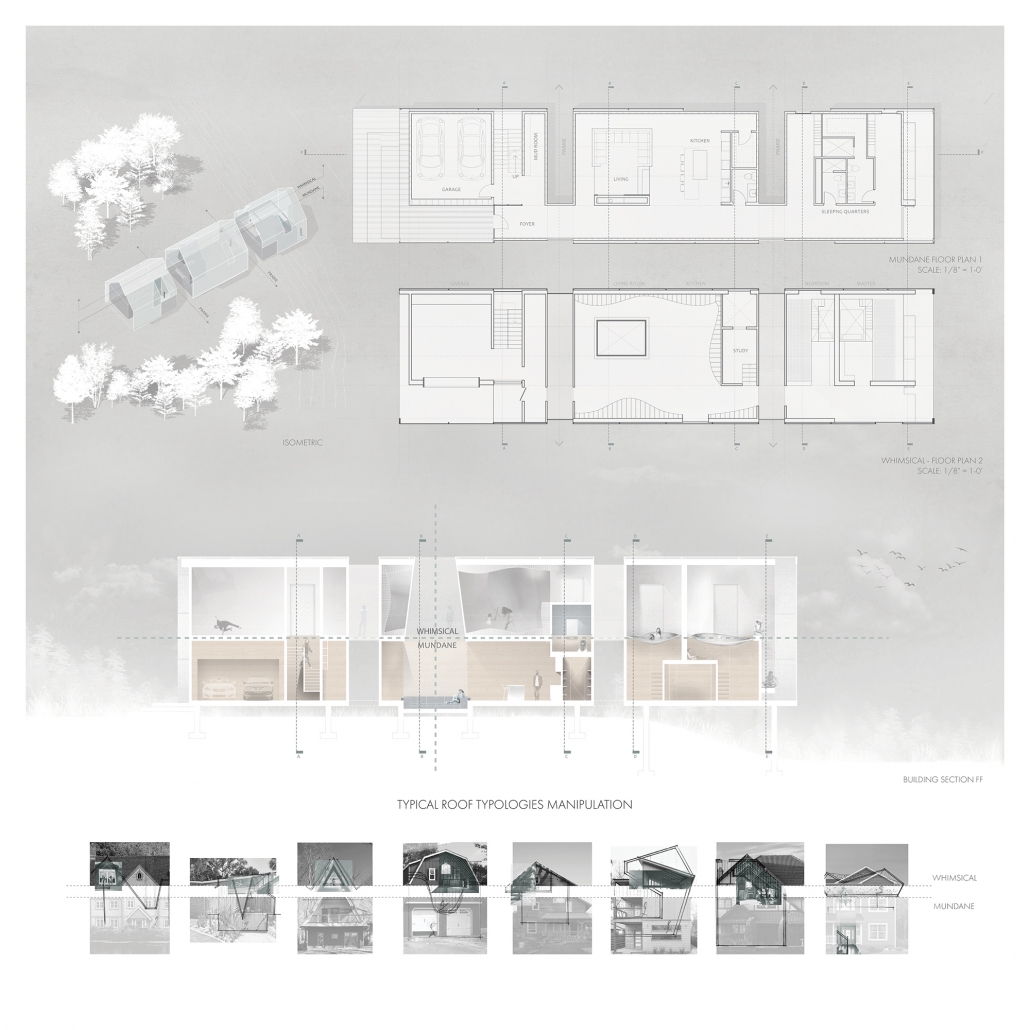 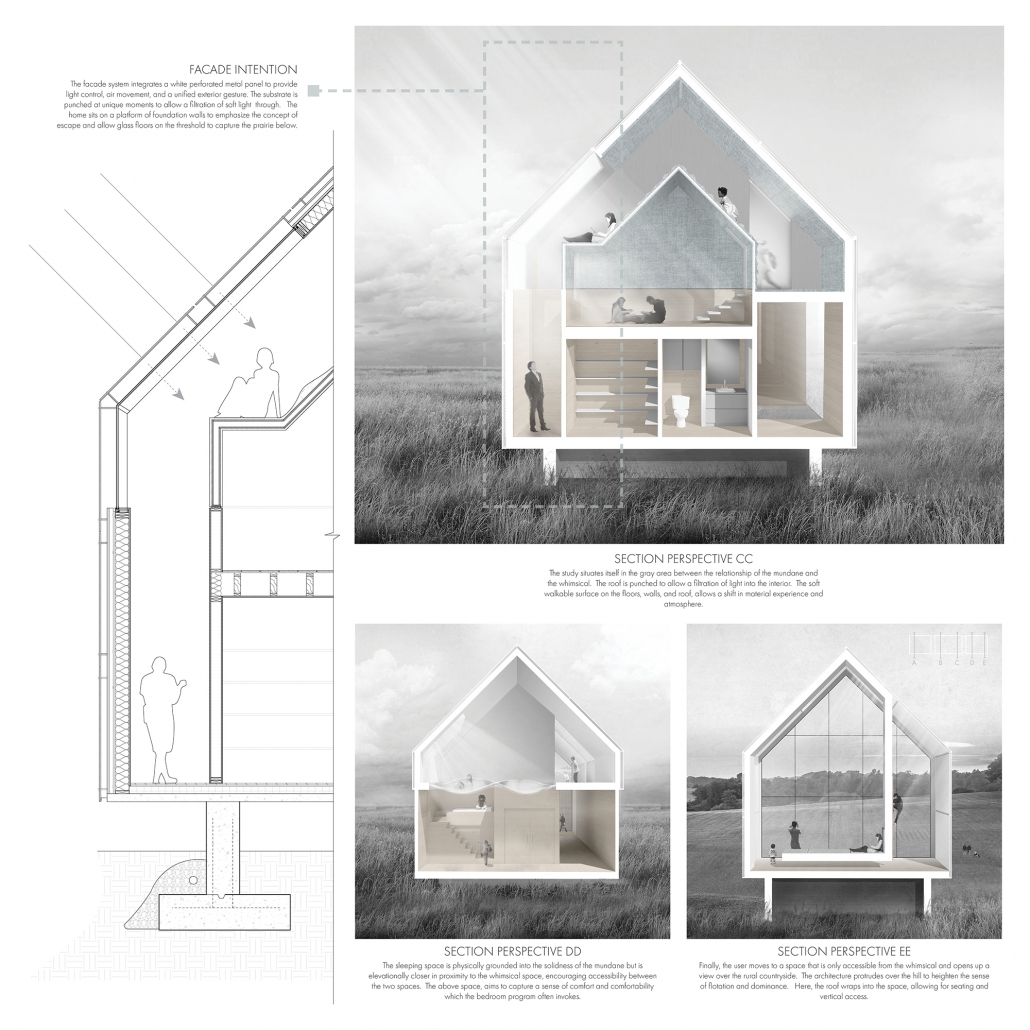 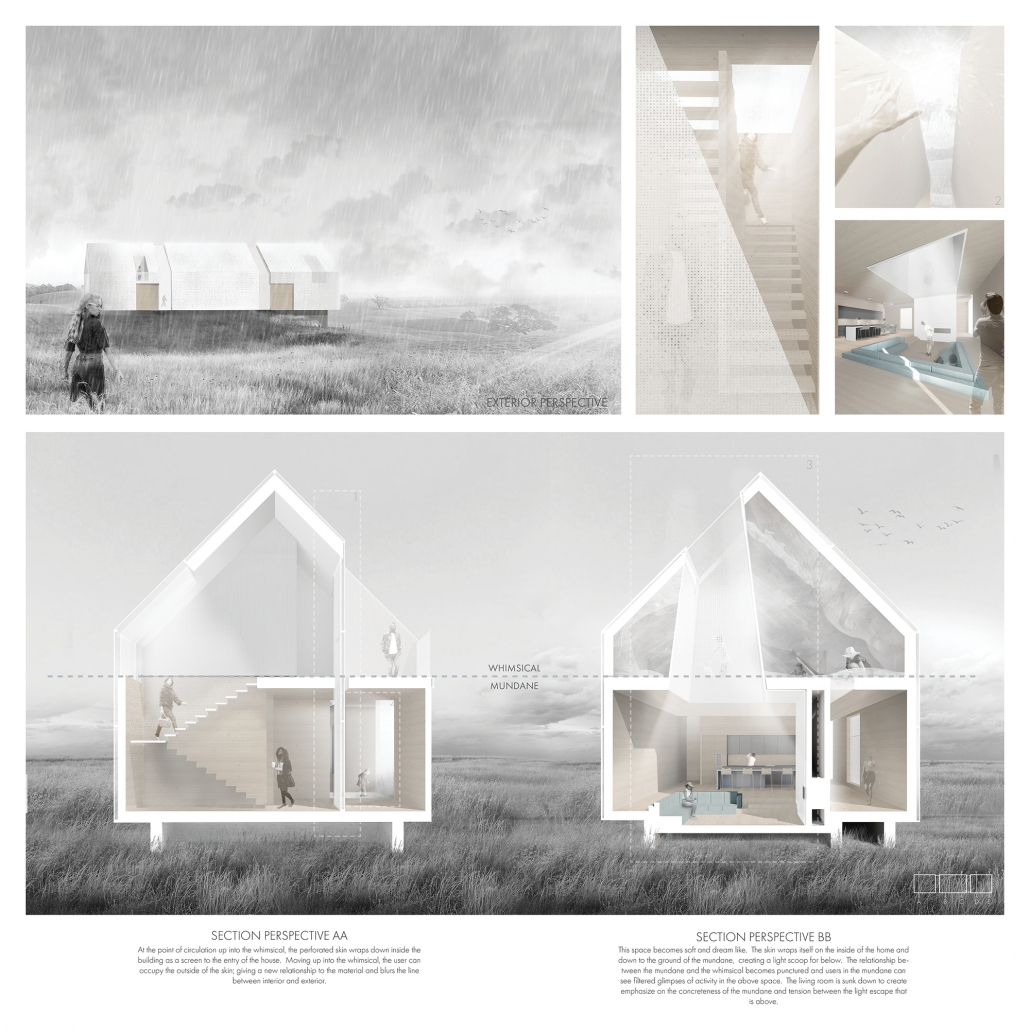 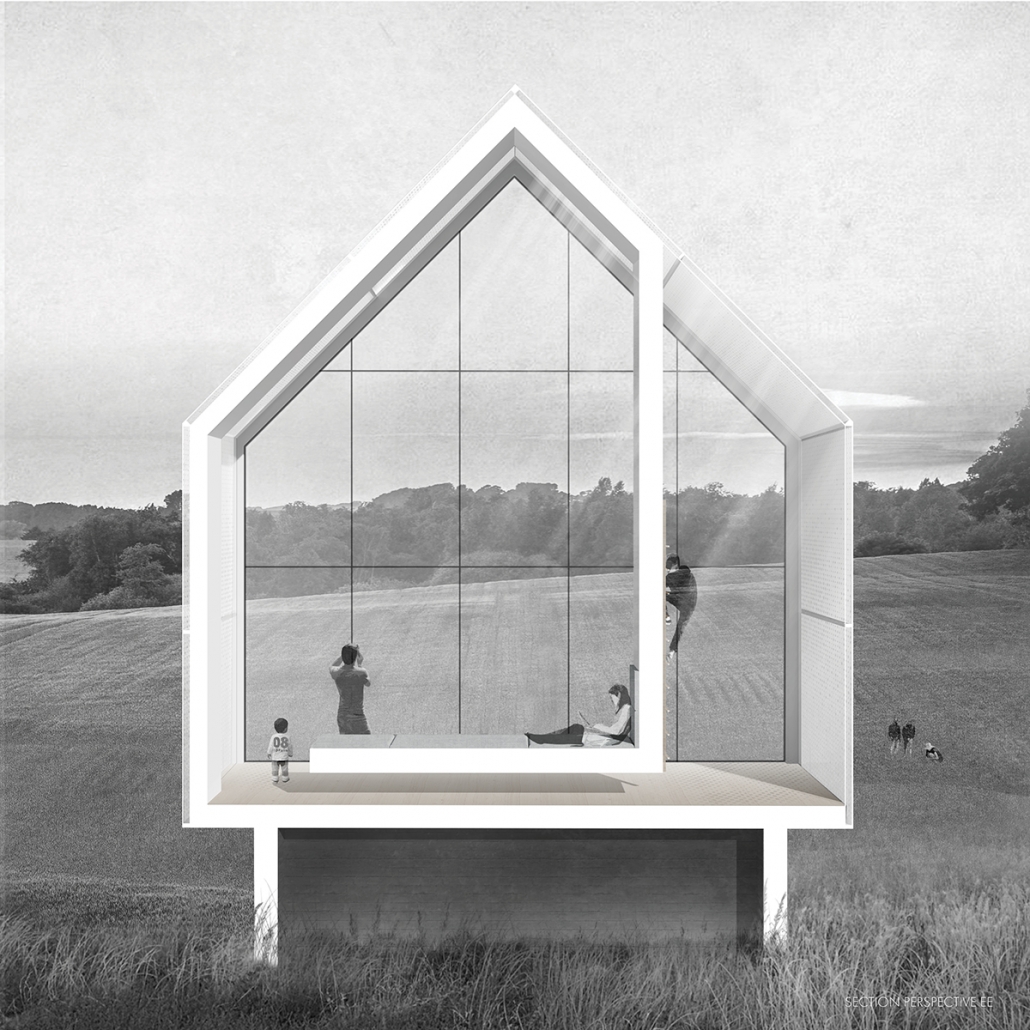 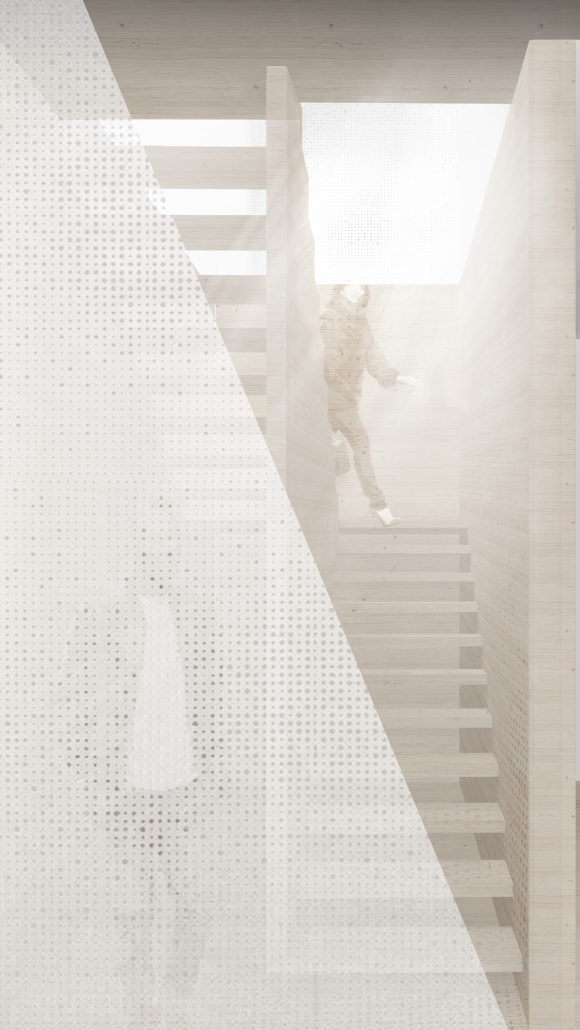 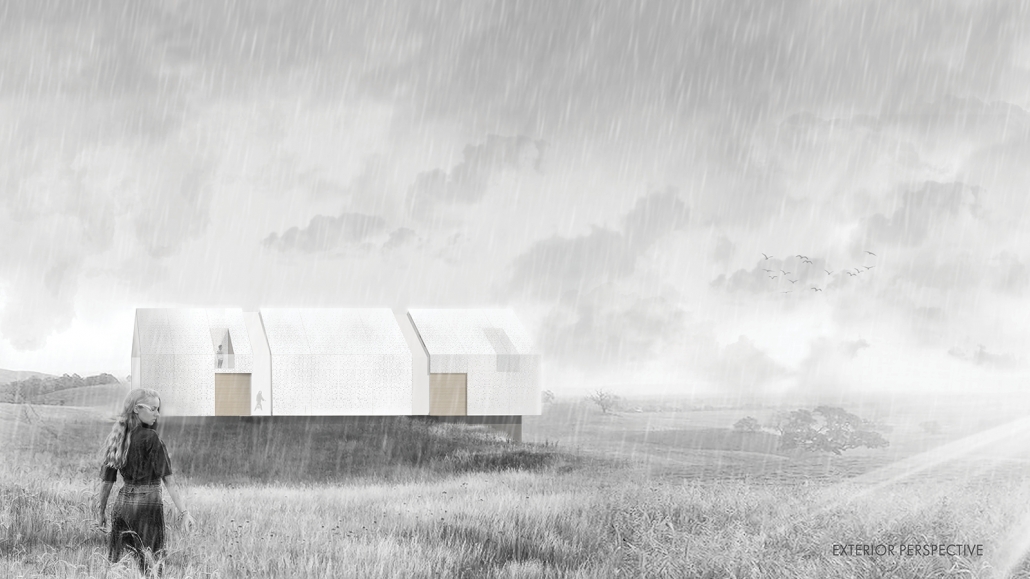 Children in the domestic setting have a unique way of interpreting and creating the spaces they desire to inhabit. They build blanket forts, stack pillows to sit on, and find themselves occupying space in a way that wasn’t necessarily how it was intended to be used; all to shift their perception of space and escape from ‘normal mundane life.’ They attempt to create or inhabit a space which is atmospherically, tangibly, and materialistically different in contrast to the everyday norm. So where then does the whimsical occur in domestic architecture? How can human experience drive these unique atmospheres for the single family home?

The Cloud House investigates this relationship of the mundane and the whimsical, where the mundane grounds the typical housing program on the ground level, and the whimsical acts programmatically as a retreat space in the formerly forgotten attic space, to allow members of the family an escape from their everyday busy life. This new, reimagined type of domesticity explores a sensual and experience based approach to the forms which are created.

The 45 degree pitch roof has become an iconic symbol of domesticity, merely acting as shelter and ‘aesthetic exterior character’. Its form creates the well known attic space, formerly an unused space. These are hidden above the ceiling, resulting on the interior as visually and experientially nonexistent, hiding spaces that are unique, desirable, and call for habitation. Architecturally, the house takes on a bar like form using the 45 degree pitched roof to preserve and ghost the domestic icon. The critique being that the users will experience the space it creates. The prairie divides the home into three sections and allows a threshold while maneuvering from space to space.

The mundane is grounded in wood contrasting the white of the whimsical. At unique moments, the roof substrate is punched to allow, the white perforated metal panel to bring a filtration of light in, drawing the user up. This perforated metal panel clads the entirety of the exterior as one gesture and experienced in certain moments on the interior.

A threshold between each section of the home immerses the user into the prairie through transparency on all surfaces. The second section becomes soft and dream like. The skin wraps itself on the inside and down to the ground of the mundane, creating a light scoop for below. The relationship between the mundane and the whimsical becomes punctured and users in the mundane can see glimpses of activity in the above space. The living room is sunk down to emphasize the concreteness of the mundane and create tension between the light escape that is above.

The study situates itself in the gray area between the two, making it the only place in the house where users can occupy the datum line of the relationship. Opportunity to crawl up and over the study allows occupancy in space that lends itself to precariousness, much like images from the domestic images. The roof is punched to allow a filtration of light through to the interior. The soft walkable surface on the floors, walls, and roof, allows a shift in material experience and atmosphere.

In the final section, the whimsical has a direct relationship with the mundane sleeping quarters. The sleeping space is physically grounded into the solidness of the mundane but is elevationally closer in proximity to the whimsical space, encouraging accessibility between the two spaces. The above space, aims to capture a sense of comfort and comfortability which the bedroom program often invokes.

Finally, the user occupies space only accessible from the whimsical and opens up a view over the countryside. The architecture releases from the landscape to heighten the sense of flotation and dominance. The roof wraps into the space, allowing for seating and vertical access.

Through the simple detail of this house, the mundane and the whimsical allow members of the family a reimagined type of domesticity. One that captures unique spatial configuration and materiality that more directly correlate to observations in the domestic images. The roof becomes a dynamic factor which contributes to the interior and exterior spatial character of the home and allows the users to occupy the whimsical in architecture.