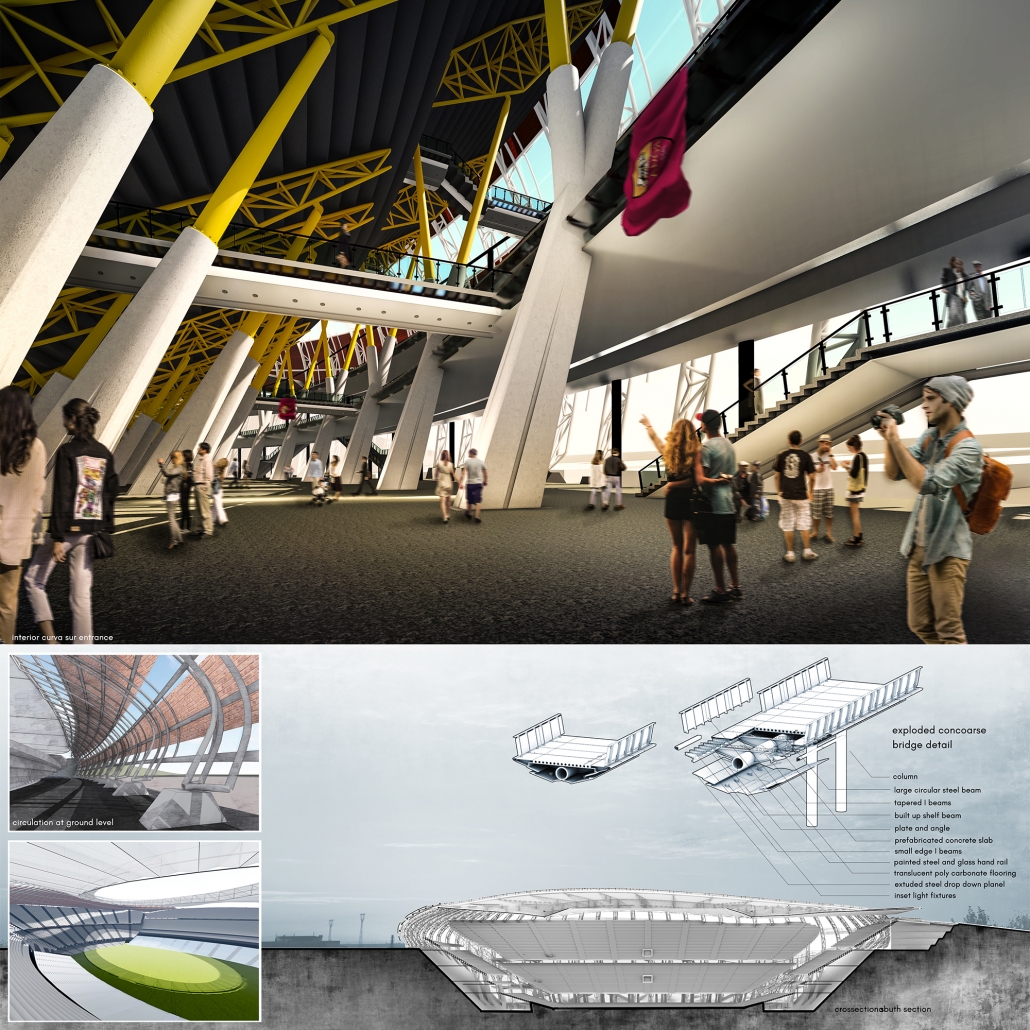 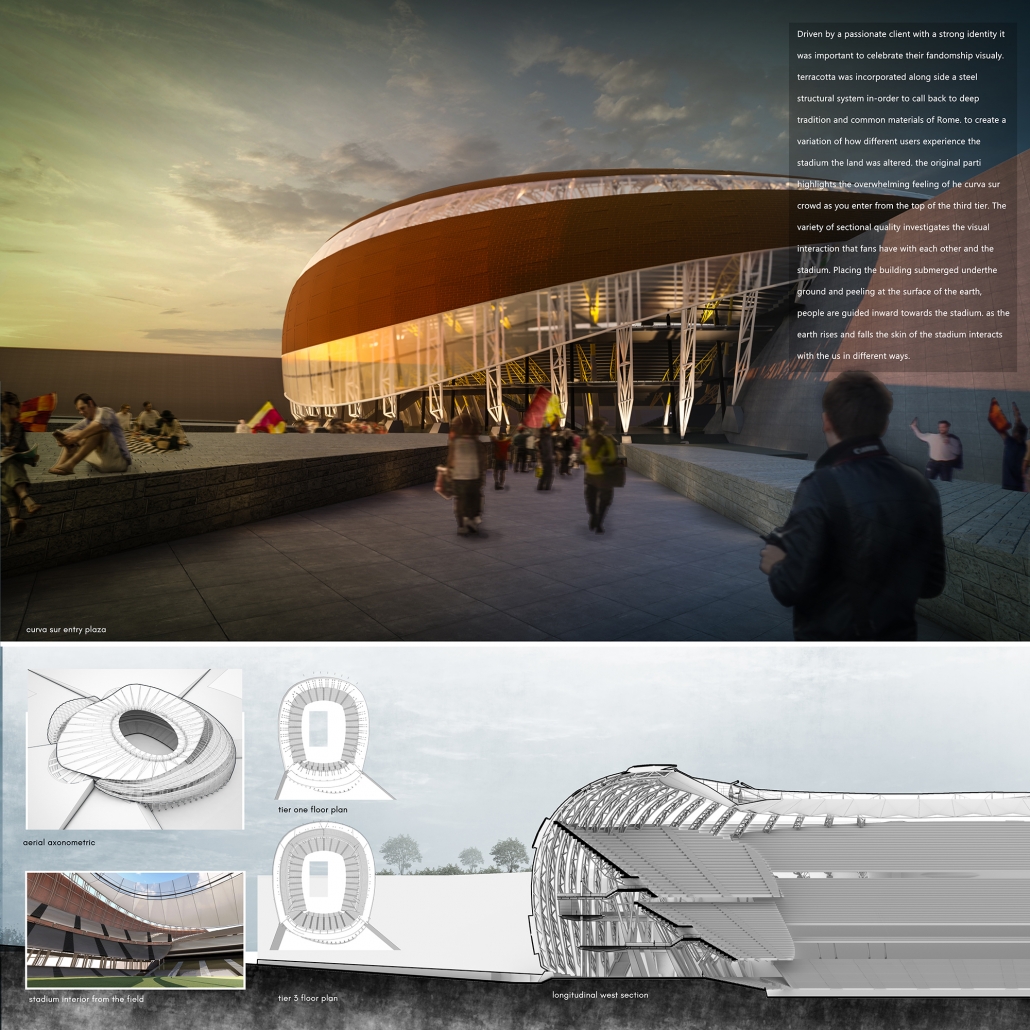 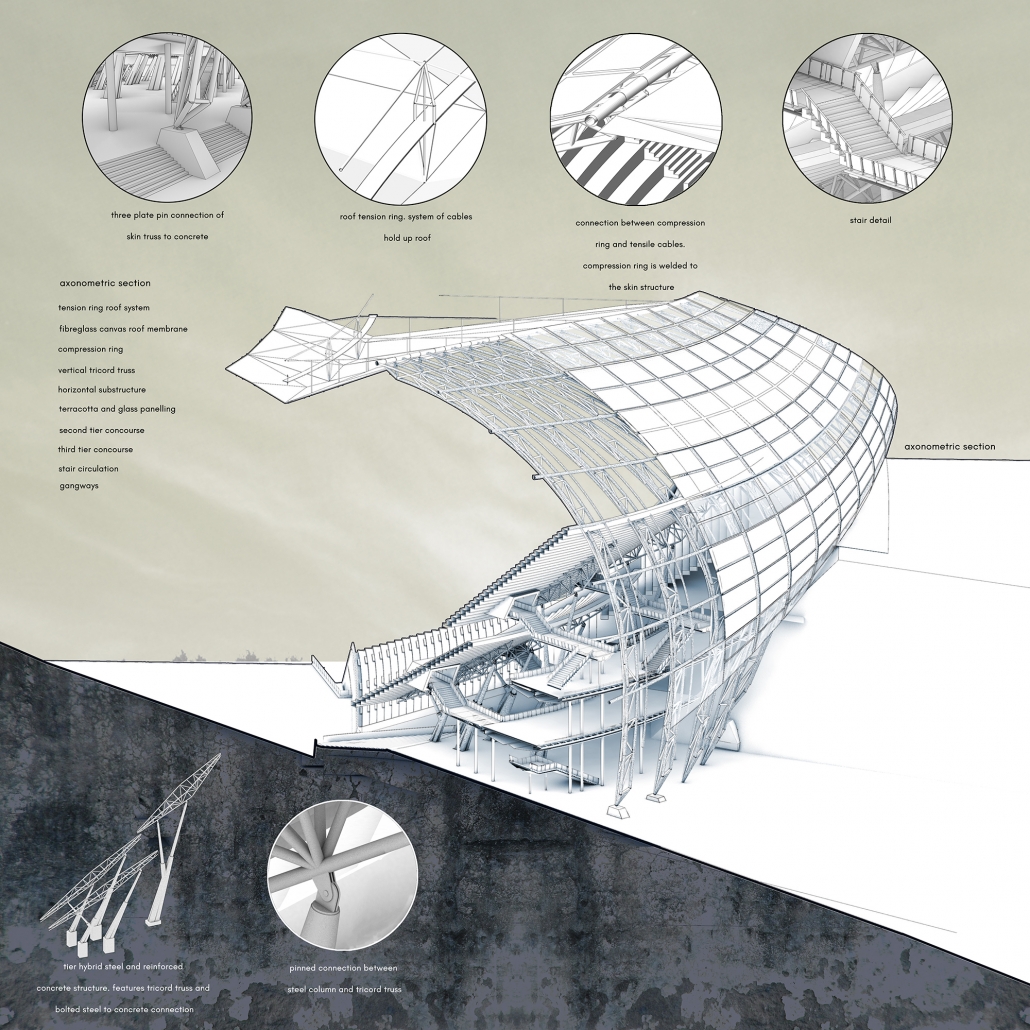 As the new house for AS Roma, the Stadio della Roma, located in the south of Rome, Italy, and flanking the Tiber River, speaks of the vitality and energy of the AS Roma soccer team’s fans, without, however, neglecting those characteristics that make of Rome a remarkable city. Paramount in the design was addressing the promenade or entrance sequence into the stadium. Like a relic of old Roman concrete, or ancient architectural ruins, the stadium lies embedded in the earth. All its layers are created by the intersection of massive earthen architecture and cutting edge steel structure, which with its repeating vertical trusses draw the eye upwards. Emphases on the human and spatial experience lead this design to consider scale, materials, and circulation of the stadium building typology. With a unique consideration of the variety of users, which gather for soccer matches, the earth was integrated as part of the facade to create intentional moments of underplayed elegance and monumental entrance. Approaching the glass and terracotta form, bellowing out from the ground, fans are drawn into the airy lace of white steel trusses, elegantly lit by twilight lights. Both the monumental facade, exposed by the carved land, and the cavernous concourse space, stretched by sculptural bridges, celebrate the fandomship of the unique AS Roma team.  Driven by a passionate client with a strong identity, it was important to celebrate their fandomship visually. Terracotta was incorporated alongside a steel structural system to call back to deep tradition and common materials of Rome. To create a variation of how different users experience the stadium, the land was altered. The original parti highlights the overwhelming feeling of the Curva Sud crowd as you enter from the top of the third tier. The variety of sectional quality investigates the visual interaction that fans have with each other and the stadium. By placing the building partially undergrounds and peeling the surface of the earth, people are guided inward towards the stadium. As the ground rises and falls, the skin of the stadium interacts with the fans in different ways.

In the development of this original form, spatial zones and functional spaces are stratified in plan first. Directional circulation traversesa concentric organization of spaces, with the stadium as the center. Next, retail and stadium masses are articulated radially through wedged zones. Entrances for different fan groups are separated from one another. Furthermore, wedges peel at the earth to create volume. Retroactively, the earth pushes against the stadium form creating a variety of building scales across the facade. Areas where the ground is recessed create a monumental entrance, while areas which are mostly covered by earth, lead the visiting teams through an underplayed and simply elegant entrance leaving them with a feeling of anticipation. Finally, once the ground is peeled away from the facade, bridges are added for circulation up to the third tier stadium seating. The refined skin of the stadium relates intimately with the land, bellowing out and expanding when it is exposed. A system of steel and terracotta form a rhythm and pattern to the skin akin to the diverse textures found in Ancient Rome construction.