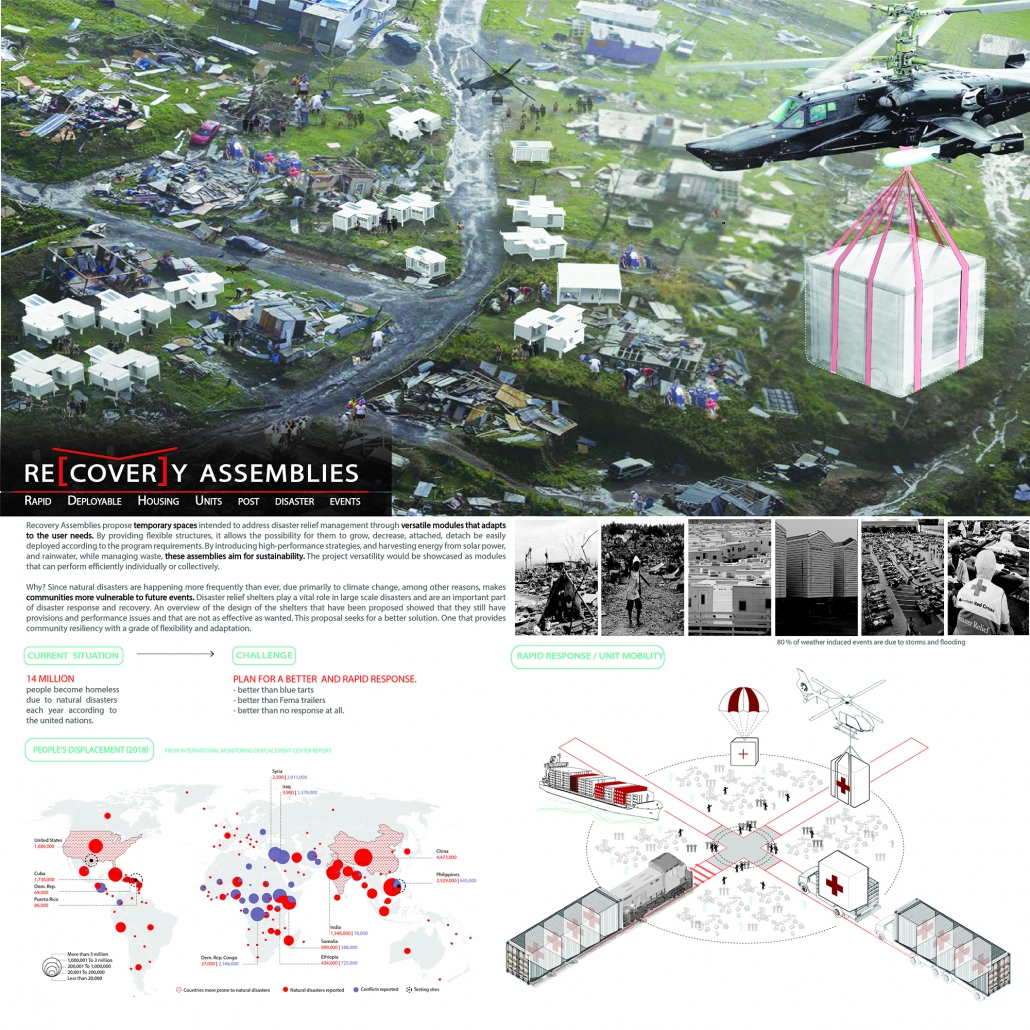 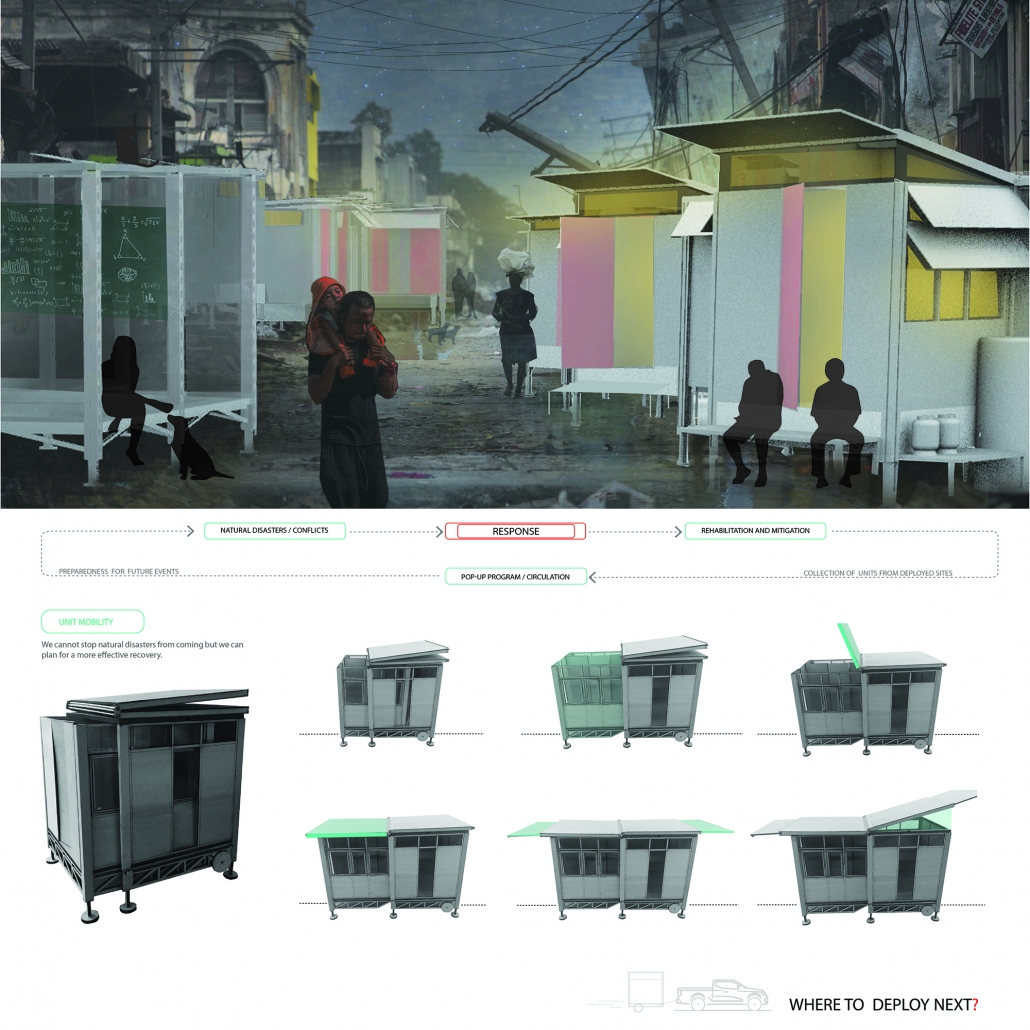 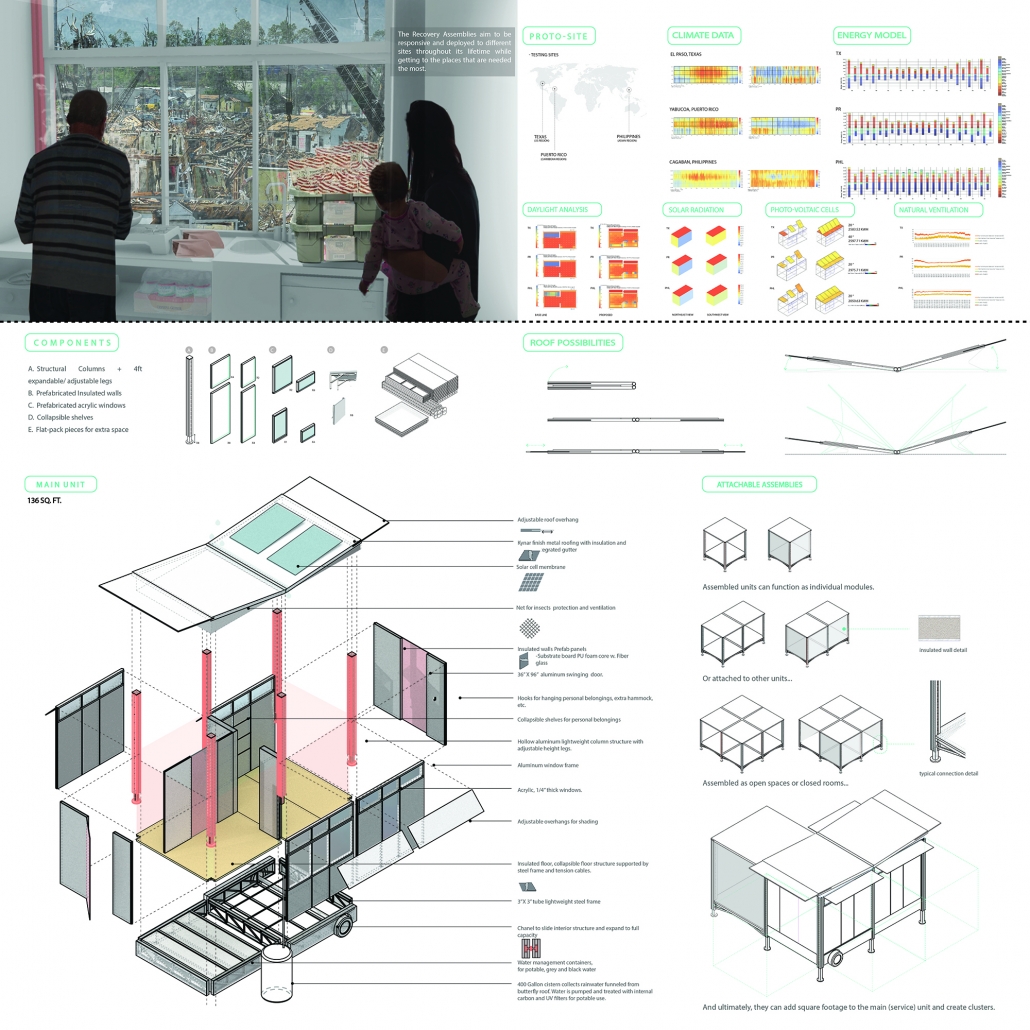 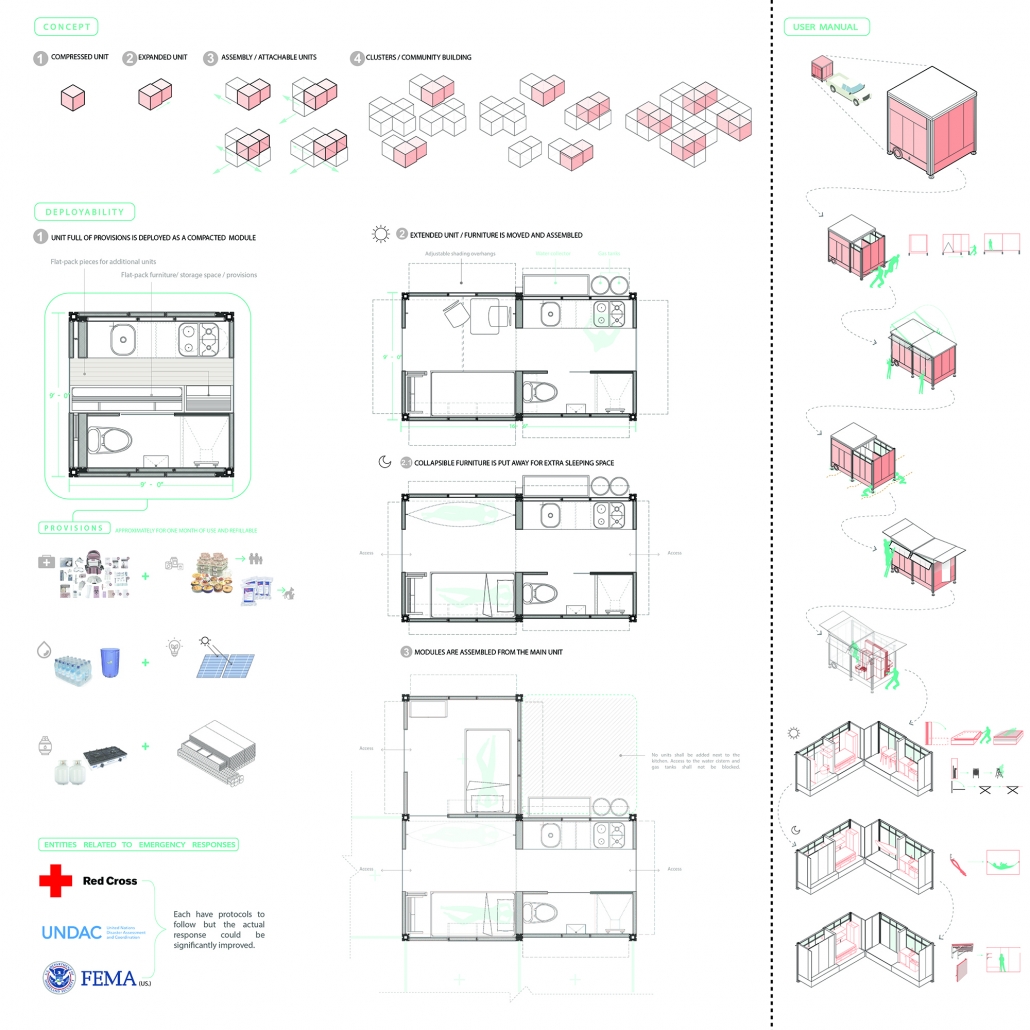 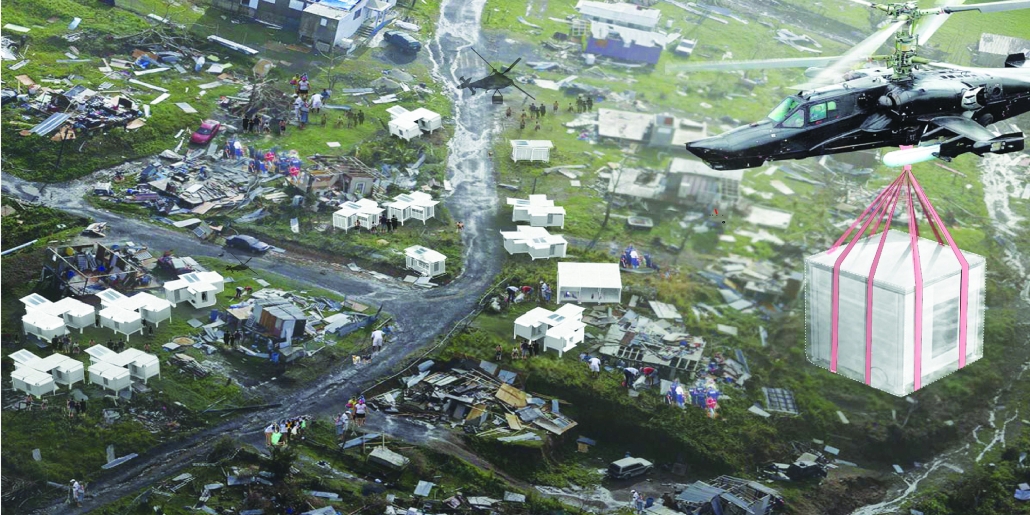 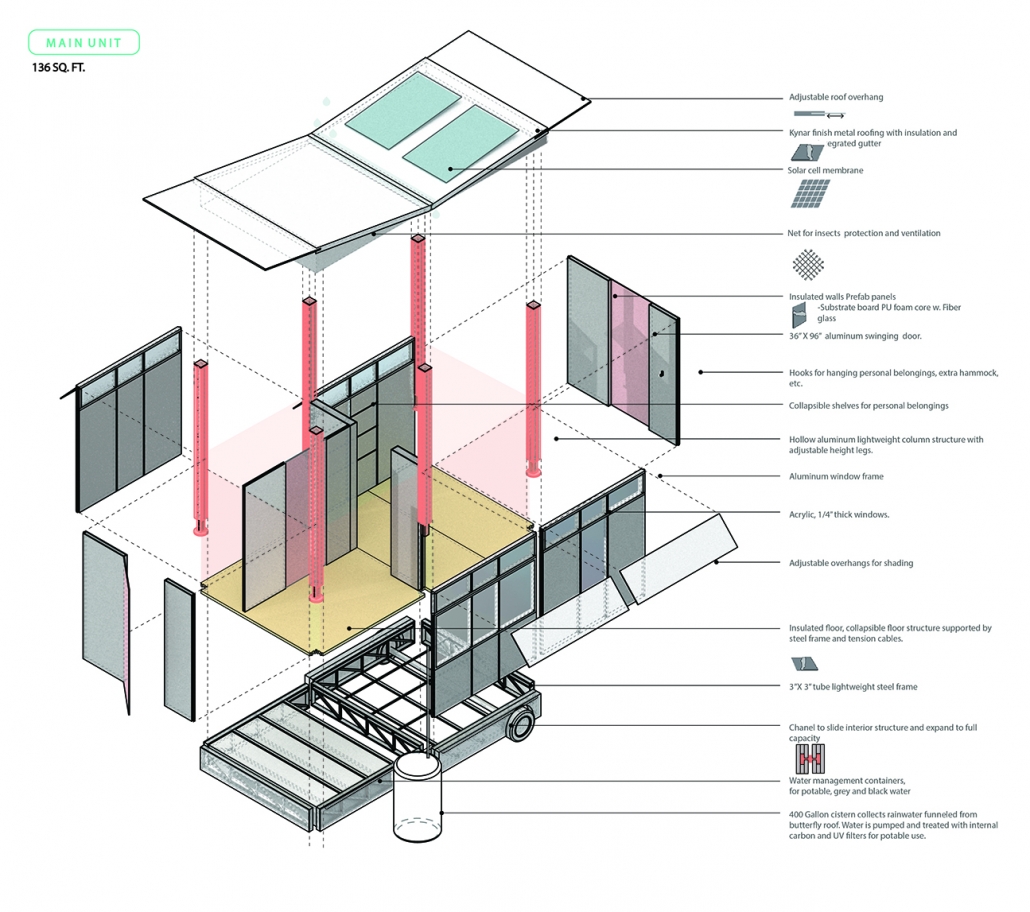 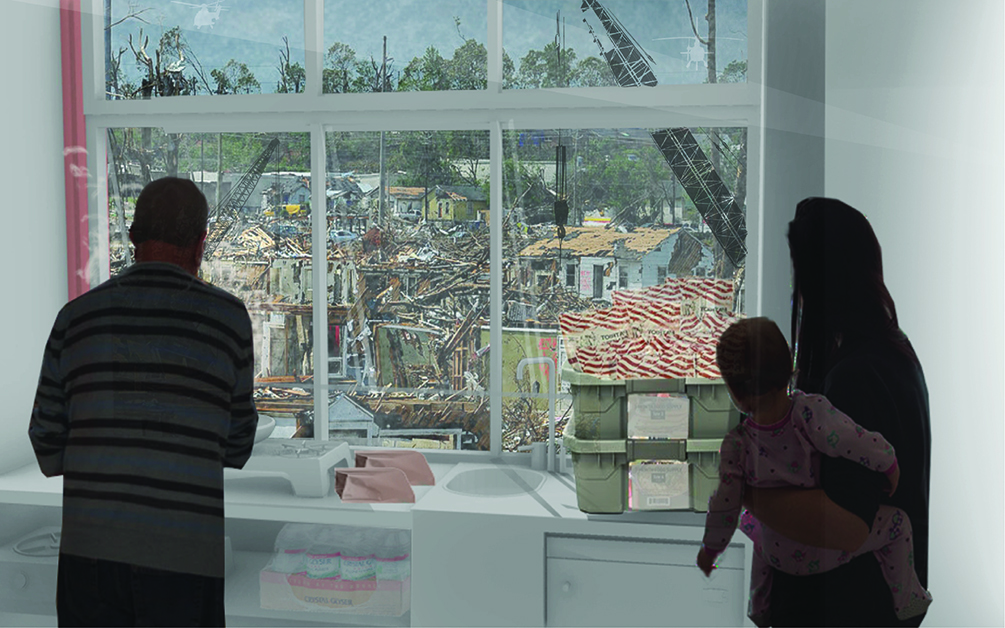 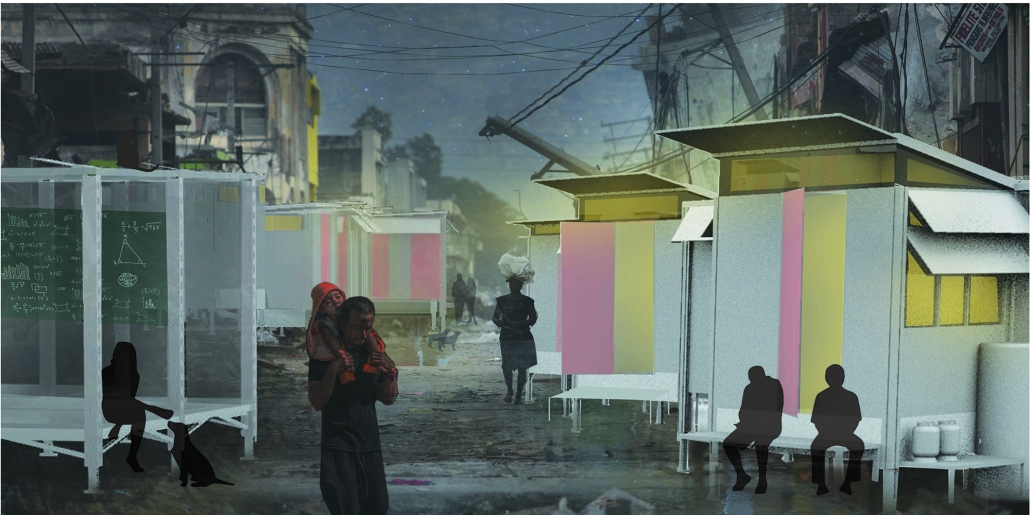 Recovery Assemblies propose prototypical temporary spaces intended to address disaster relief management through versatile modules that adapts to the user needs. By designing flexible structures, these modules would be effortlessly deployed by traditional means of transportation: land, water or air ensuring the response is given where it’s needed the most. In addition to this, it would allow the possibility for the units to scale up, be attached/detach from one another to create clusters or even provoke pop-up communities that would contribute to the restoration of damaged sites.

Since natural disasters are occurring more frequently than ever, primarily due to climate change, communities are more vulnerable to future events; especially those with scarce resources in high prone zones. In the year 2018, more than 300 unfortunate events were reported. Even though the data may seem as unalarming, it provoked the displacement of thousands and thousands of people from their homes. In fact, according to the United Nations, about 14 million people become homeless each year due to these catastrophes. Meaning that if we want to see an improvement to the actual response and governmental, we have to take a better look at the current protocols and if they are effective in today’s recovery effort.

The project argues that the present protocols and responses provided by entities such as the Red Cross, FEMA, and the United Nations Disaster Assessment and Coordination programs, could dramatically improve. In the past, we have seen people being displace to public spaces, provisional trailers, tents, among others that arrive as a temporary solution but transform into a permeant solution due to lack of commitment by these agencies. Contrary to what has been seen before, Recovery Assemblies introduces high-performance strategies that aim for a sustainable approach, while focusing on its users’ comfort, thus providing all the basic needs for a safer recovery.

Hence, disaster relief shelters play a vital role in disaster response and recovery. Events such as flooding, earthquakes, wildfires, tsunamis, drastic weather, and hurricanes such as Michael, Maria, Katrina, Hugo, Harvey, Sandy and many others have scarred the history of our cities, our grounds, and our physical environment. With that said, this proposal seeks for a superior solution, preparation and response to those catastrophes by providing a vision towards community resiliency with a grade of flexibility and adaptation.