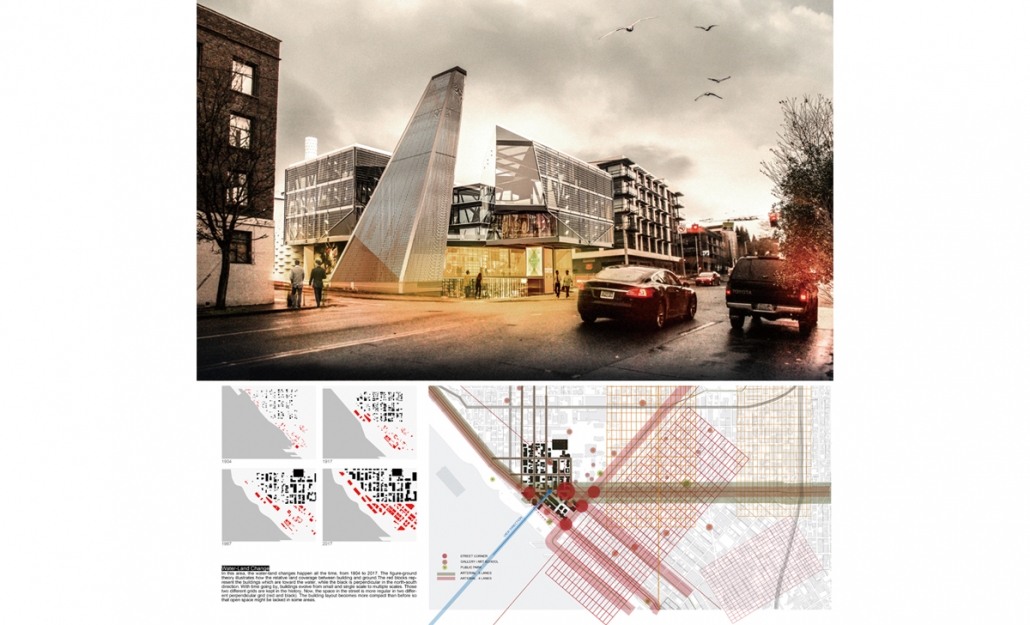 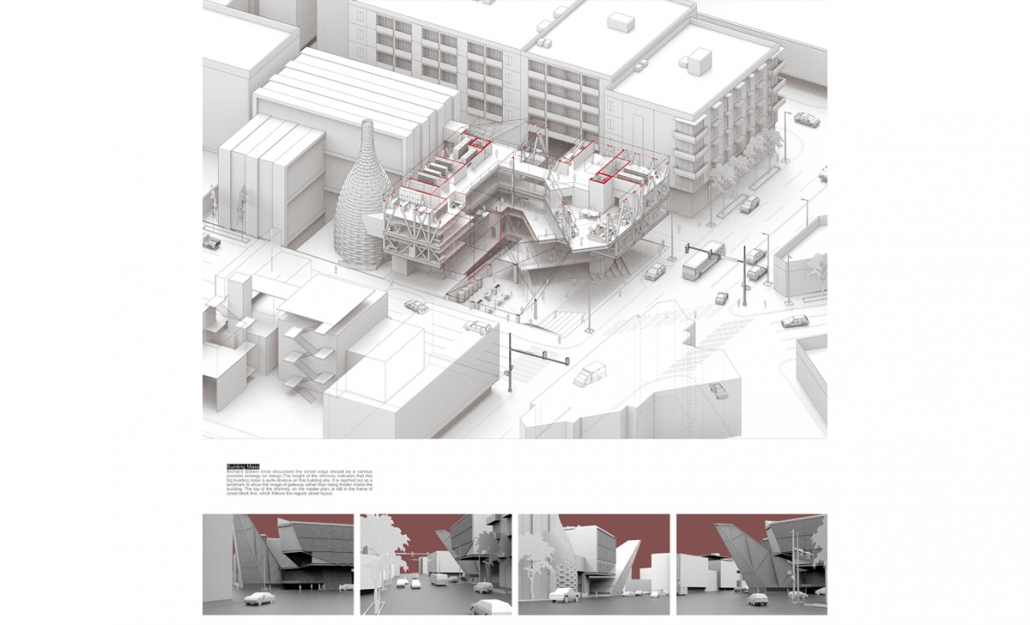 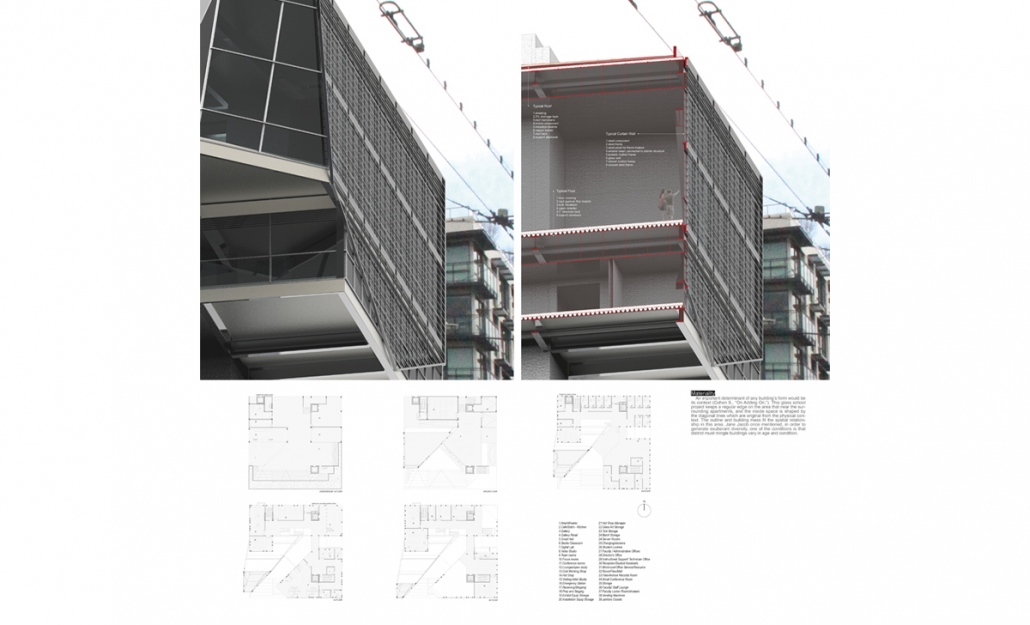 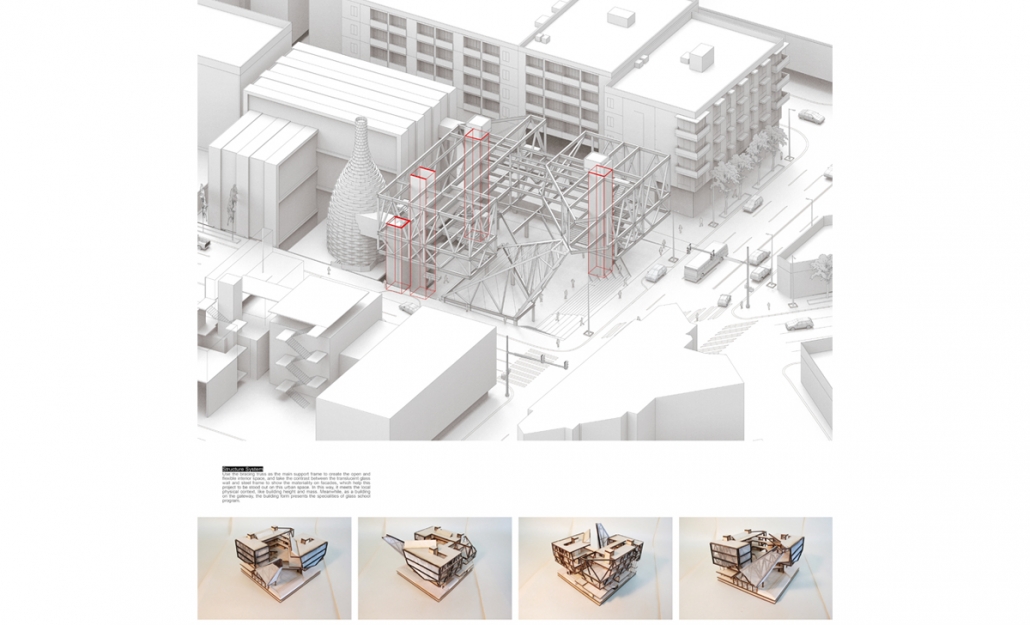 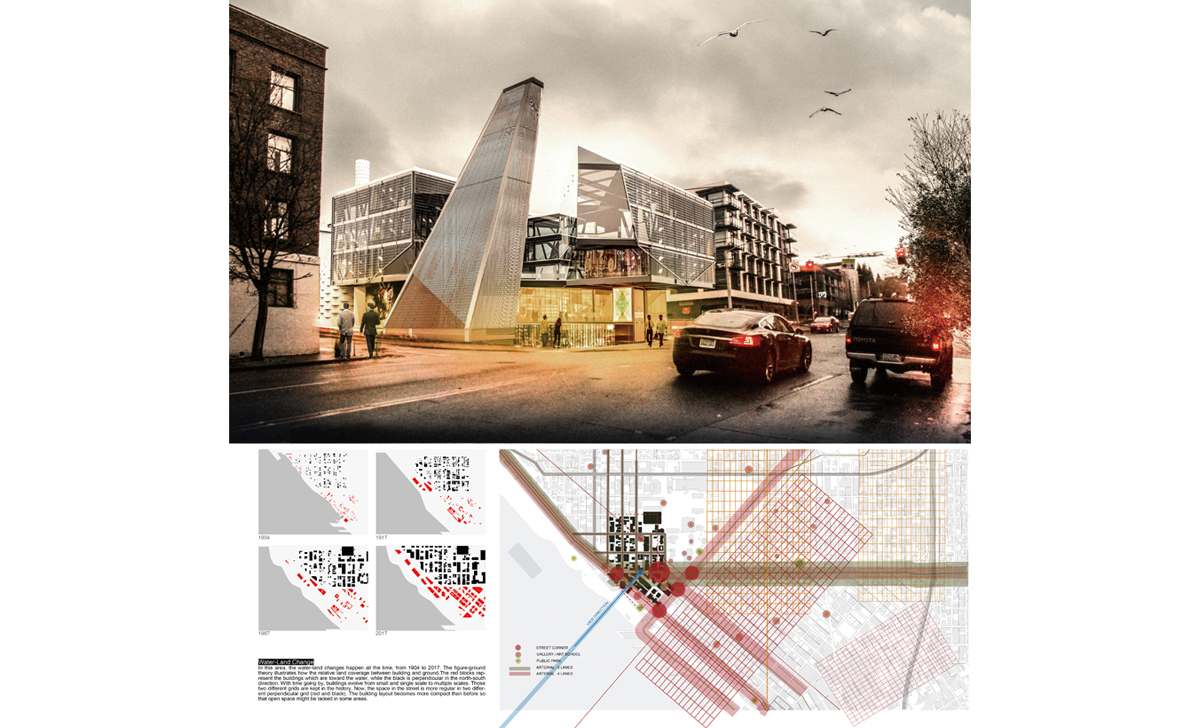 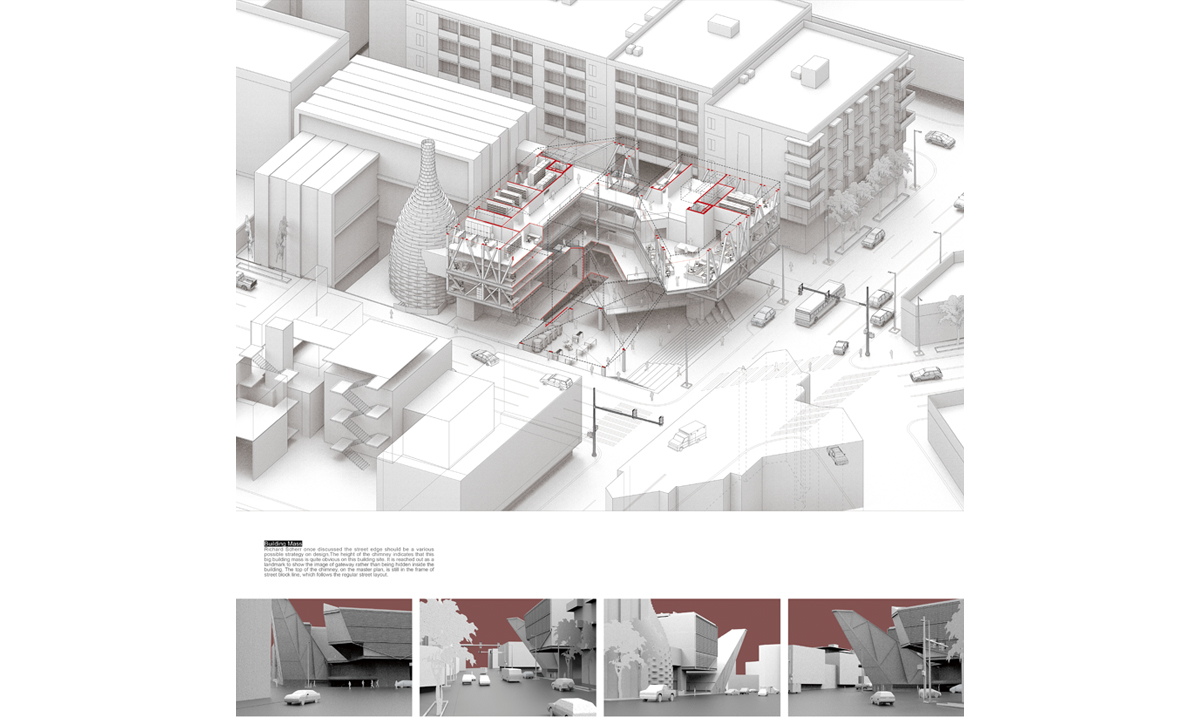 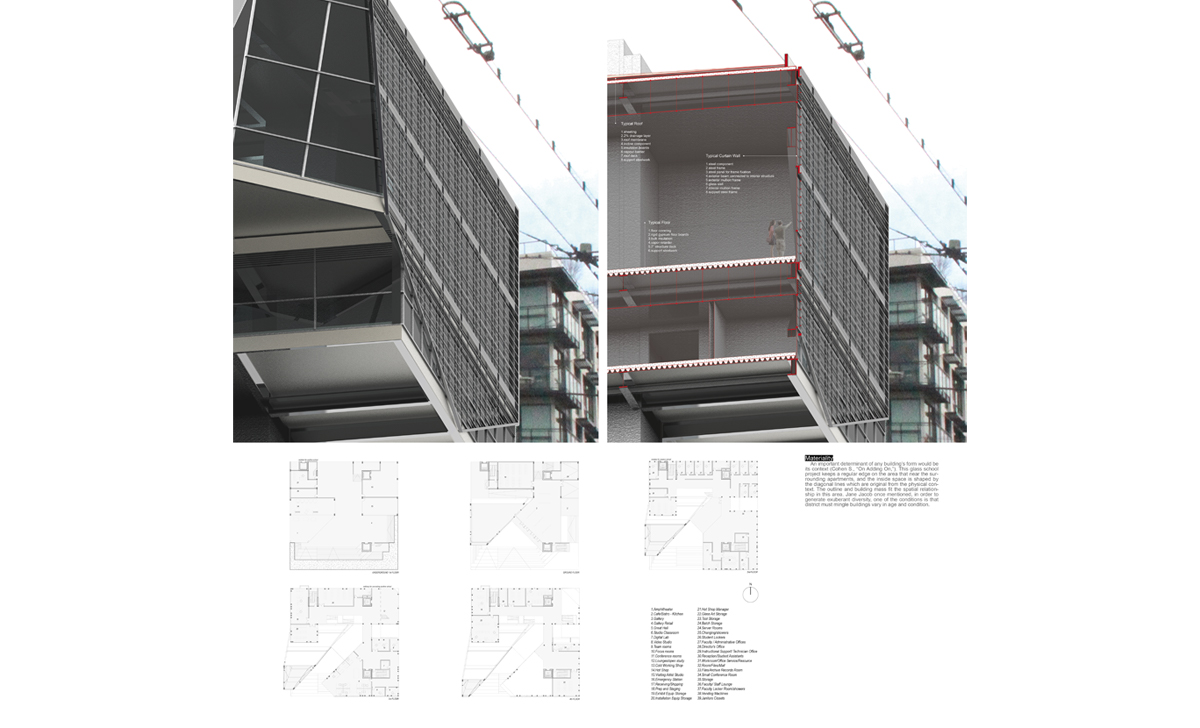 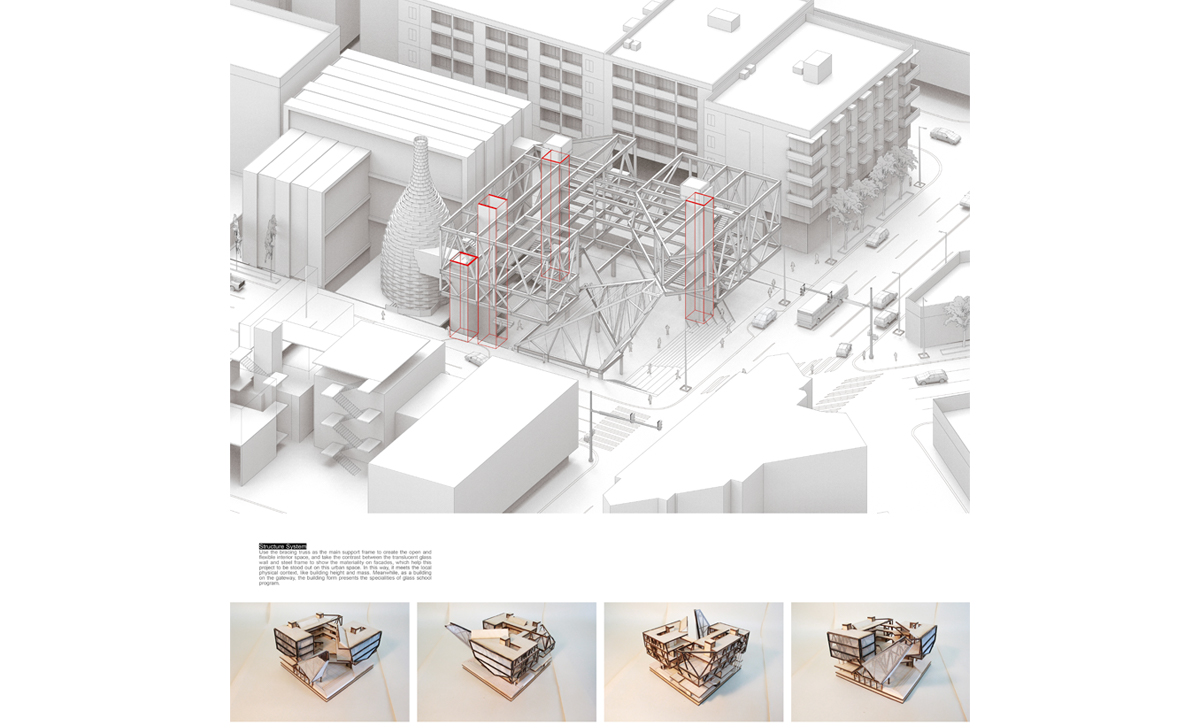 Abstract/Essay
This project is Glass School, located in the uptown area, Seattle. There are various dynamic forces on the site, people’s daily activities, walking circulation, and environmental factors. Those elements are changeable frequently and regular within some time period. With time going by, the physical urban space is formed by those force. By contrast, the building form and urban texture are quite static to the dynamic force. In this design, it is looking for some spatial relationships on building geometry. For example, the glass school needs a huge chimney for hot shop’s ventilation, and it can be opened to the public as a landmark in this street block. The geometrical lines in different planes shape the physical building mass and shape open public space.

Program Edit
The Program for the Glass School will have the largest working Hot Shop inside the building, with an audience chamber. Also it has to accommodate cold working shops and a large mockup space for larger scale installations projects. The Glass School will need 2 Galleries, a black box Gallery and a natural light filled Gallery, and back of house areas for each gallery for construction of displays and repairs. There will be 6 Studio apartments for the visiting artists and their teams. An Outdoor space for Glass casting and the display will serve as a 3rd Gallery space. Retail space should be provided and a small café.

Water-Land Change
In this area, the water-land changes happen all the time, from 1904 to 2017. The figure-ground theory illustrates how the relative land coverage between building and ground. The red blocks represent the buildings which are toward the water, while the black is perpendicular in the north-south direction. With time going by, buildings evolve from small and single scale to multiple scales. Those two different grids are kept in the history. Now, the space in the street is more regular in two different perpendicular grid (red and black). The building layout becomes more compact than before so that open space might be lacked in some areas.

Materiality
An important determinant of any building’s form would be its context (Cohen S., “On Adding On,”). This glass school project keeps a regular edge on the area that near the surrounding apartments, and the inside space is shaped by the diagonal lines which are original from the physical context. The outline and building mass fit the spatial relationship in this area. Jane Jacob once mentioned, in order to generate exuberant diversity, one of the conditions is that district must mingle buildings vary in age and condition.

Building Mass
Richard Scherr once discussed the street edge should be a various possible strategy on design. The height of the chimney indicates that this big building mass is quite obvious on this building site. It is reached out as a landmark to show the image of gateway rather than being hidden inside the building. The top of the chimney, on the master plan, is still in the frame of street block line, which follows the regular street layout.

Structure System
Use the bracing truss as the main support frame to create the open and flexible interior space, and take the contrast between the translucent glass wall and steel frame to show the materiality on facades, which help this project to be stood out on this urban space. In this way, it meets the local physical context, like building height and mass. Meanwhile, as a building on the gateway, the building form presents the building function of glass school program.