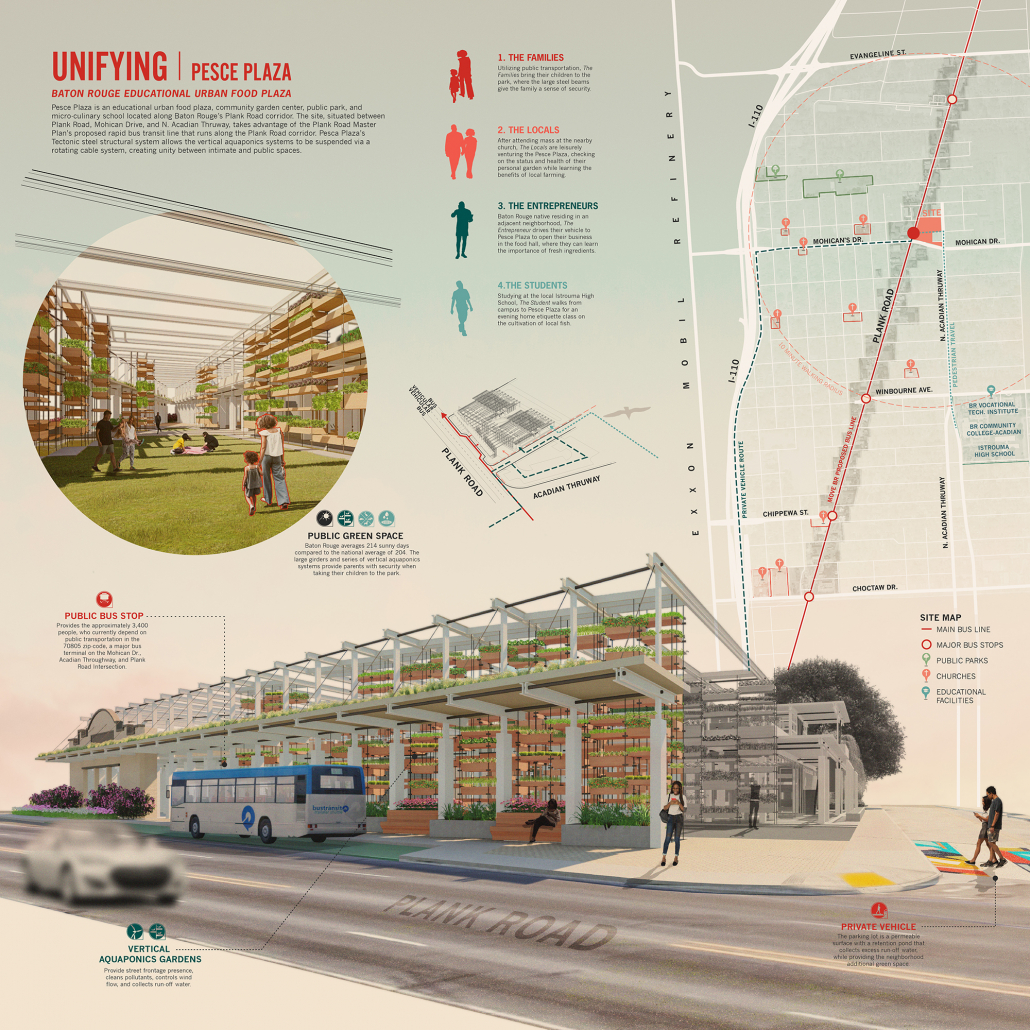 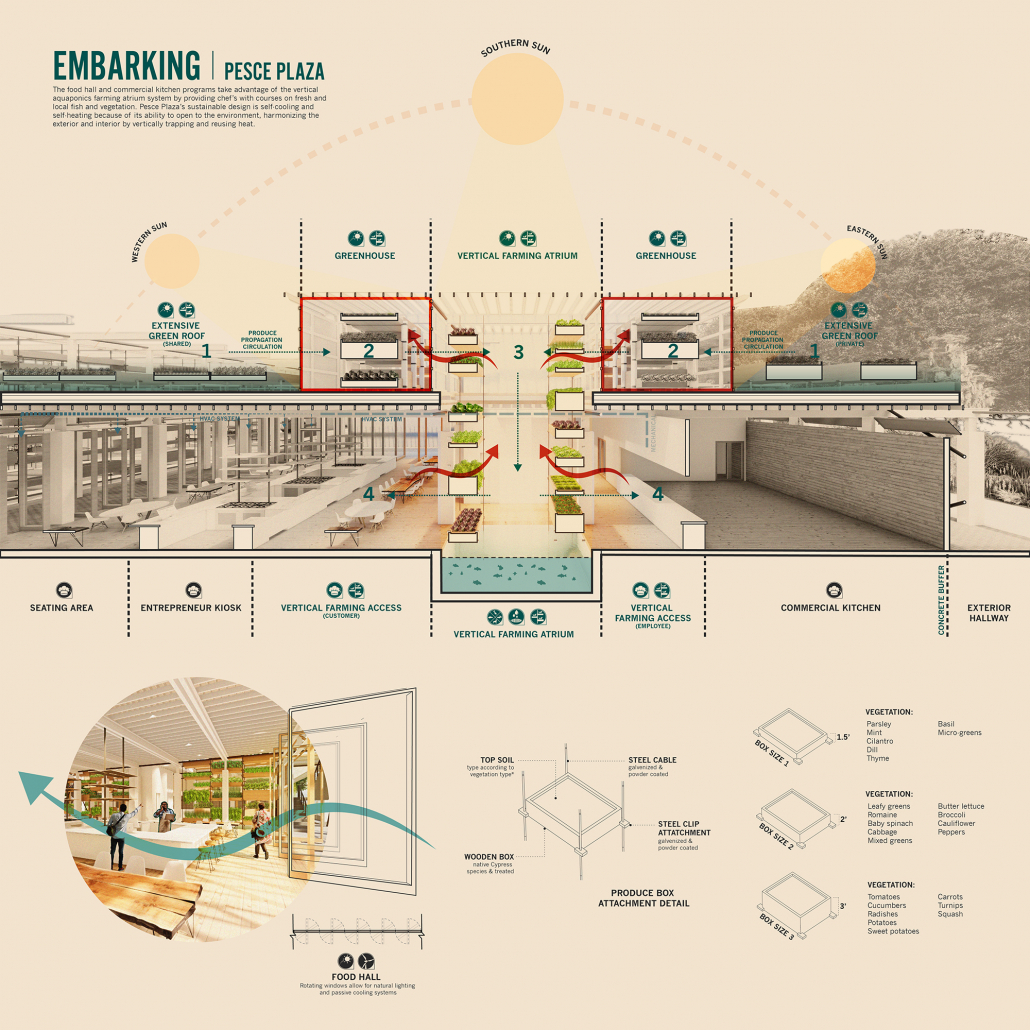 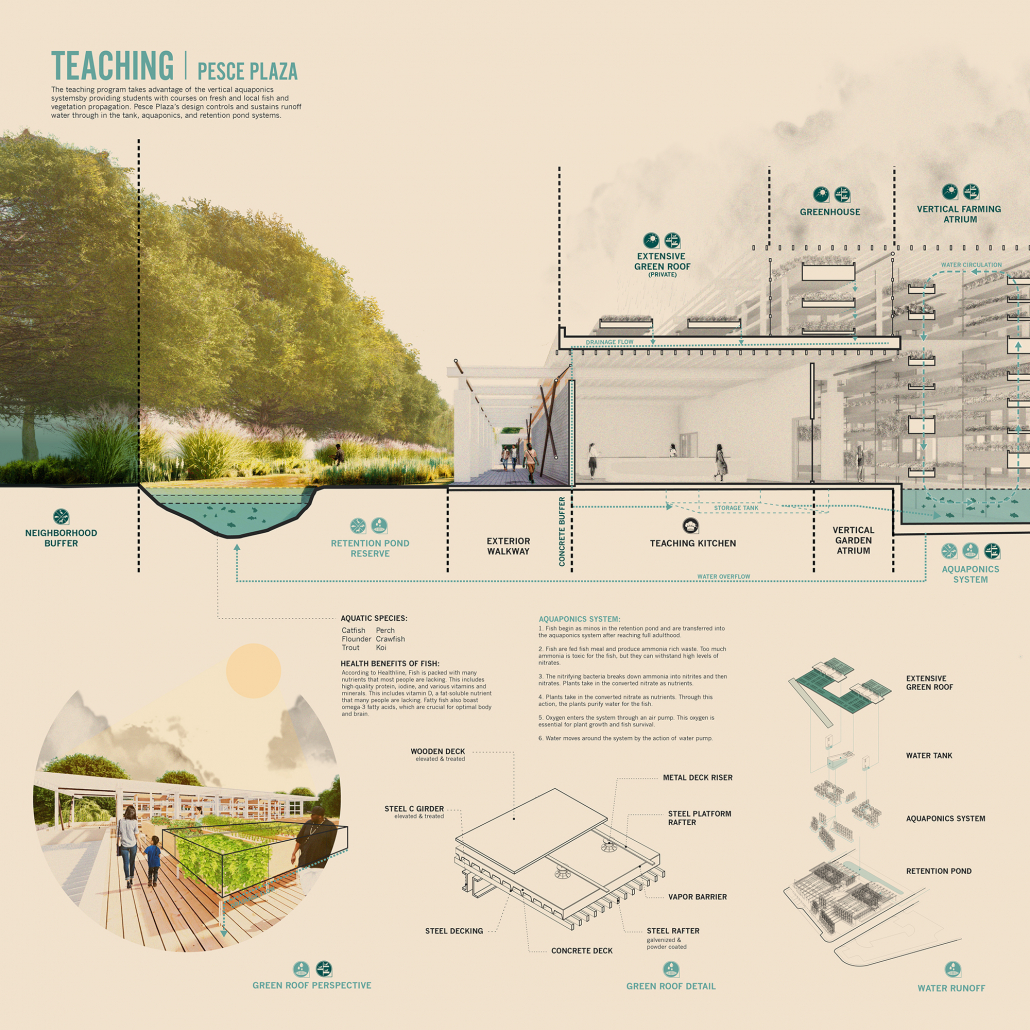 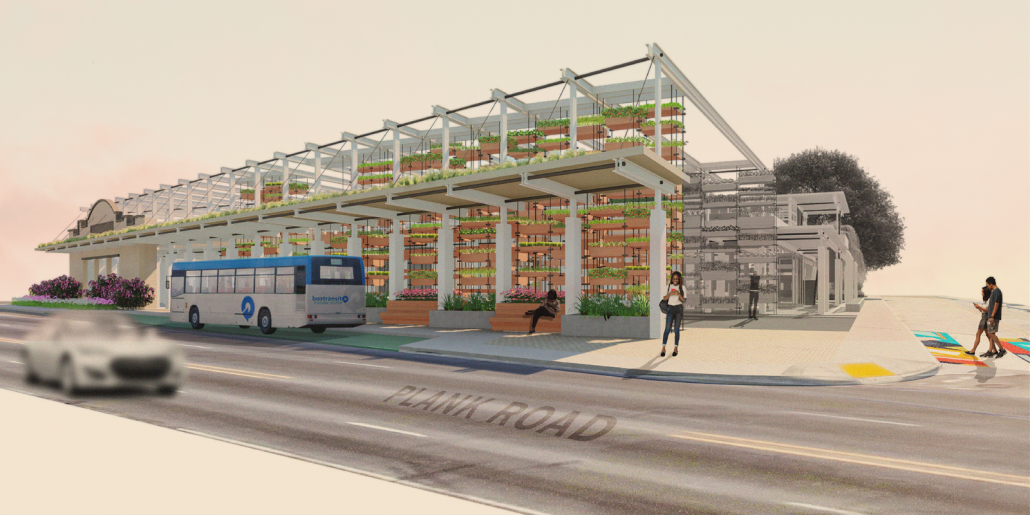 Pesce Plaza is a compelling design with an art to the presentation that is understated. There’s a buildable practicality of the proposal which makes the elements on the plans believable. The drawings are beautiful, simple and clear. The students’ successful solution tackles the design problem head-on with a clear step by step process. The project shows a clear understanding of steel structure with beautiful execution.

Located along the Plank Road Corridor, Pesce Plaza is an educational urban food plaza, community garden center, public park, farmers market, and micro-culinary school that emphasizes healthy cooking and propagation with local fish and vegetation. Plank Road, which was once a major bustling highway connecting the Baton Rouge regional airport to the Louisiana state capitol, has since been underappreciated with the implementation of interstate I-110. The site, situated between Plank Road, Mohican Drive, and N. Acadian Thruway, takes advantage of the Plank Road Master Plan’s proposed rapid bus transit line that runs along the Plank Road corridor by providing a major bus terminal for the Approximately 3,400 people who currently depend on public transportation within the zip code 70805.  The entire building is designed around a vertical aquaponics system that allows the building to have a street frontage presence while simultaneously creating a public park located immediately on the plank road corridor, solving the evident lack of green space issue located along the corridor. Pesce Plaza’s Tectonic steel structural system creates unity between contrasting intimate and public spaces because of its ability to span great lengths. The long spanning steel girders within the open park space allow families to receive the full benefits of an open-concept green space, while having a sense of security and enclosure.

Users exploring Pesce Plaza will notice the beautifully detailed and simplistic connection between the steel C girders and columns, which are connected by a rod attachment that runs the entire length of the building. Upon exploration, users will notice a large green ramp that ascends users to three large intensive green roof systems, one being a shared green roof system between neighborhood locals and the food programs, and the other two green roof systems, which have private entrances that are strictly used for food programs and employees.

Students from local schools take advantage of the teaching kitchen’s courses on fresh and local fish and vegetation propagation. A self-draining and water storage system, Pesce Plaza stores the extensive green roofs’ run-off water in tanks underneath the large garden ramp and two elevator systems, which filters and dispenses the water into the aquaponics systems. During heavy rainstorms, the aquaponics systems can overflow into the retention pond, which also couples as a green vegetated buffer system for the adjacent neighborhood. The fish are first grown in the retention pond as minnows and are then moved into the aquaponics system after they reach full adult size.