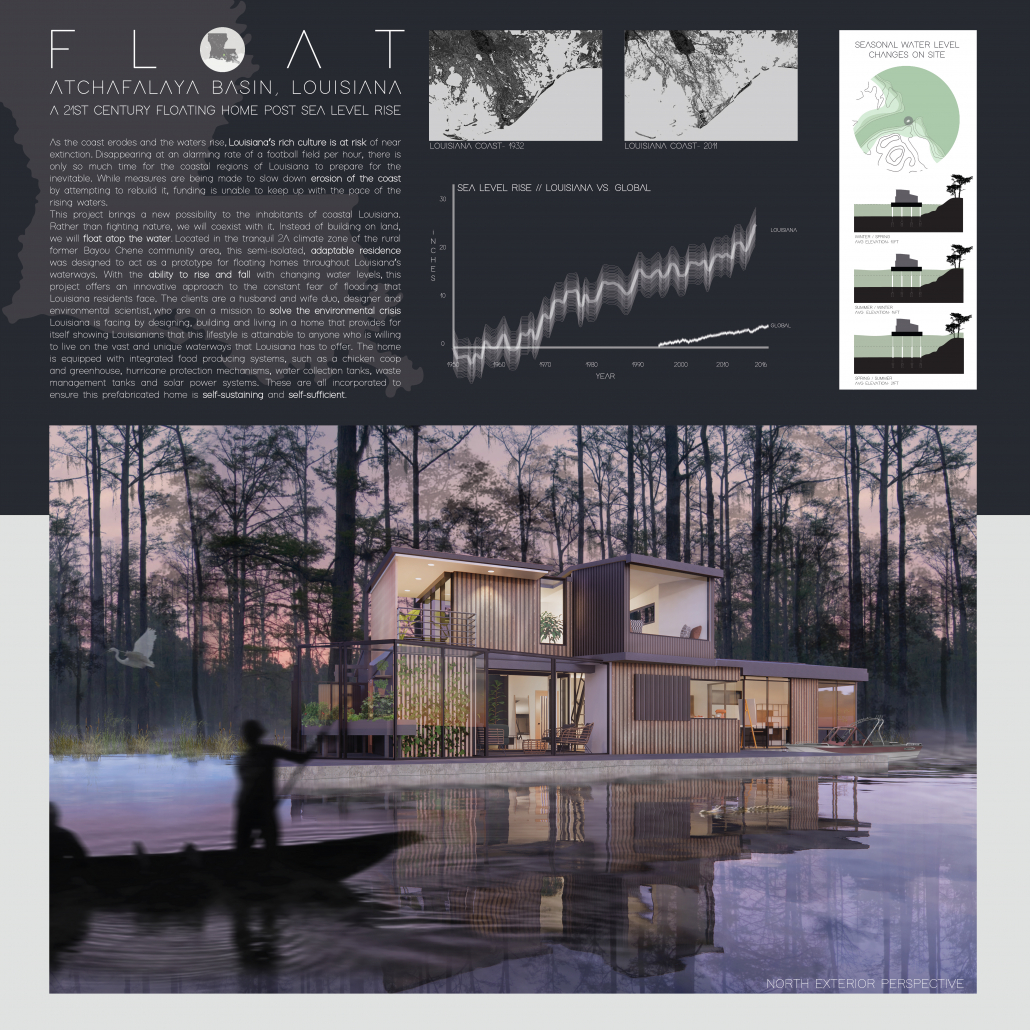 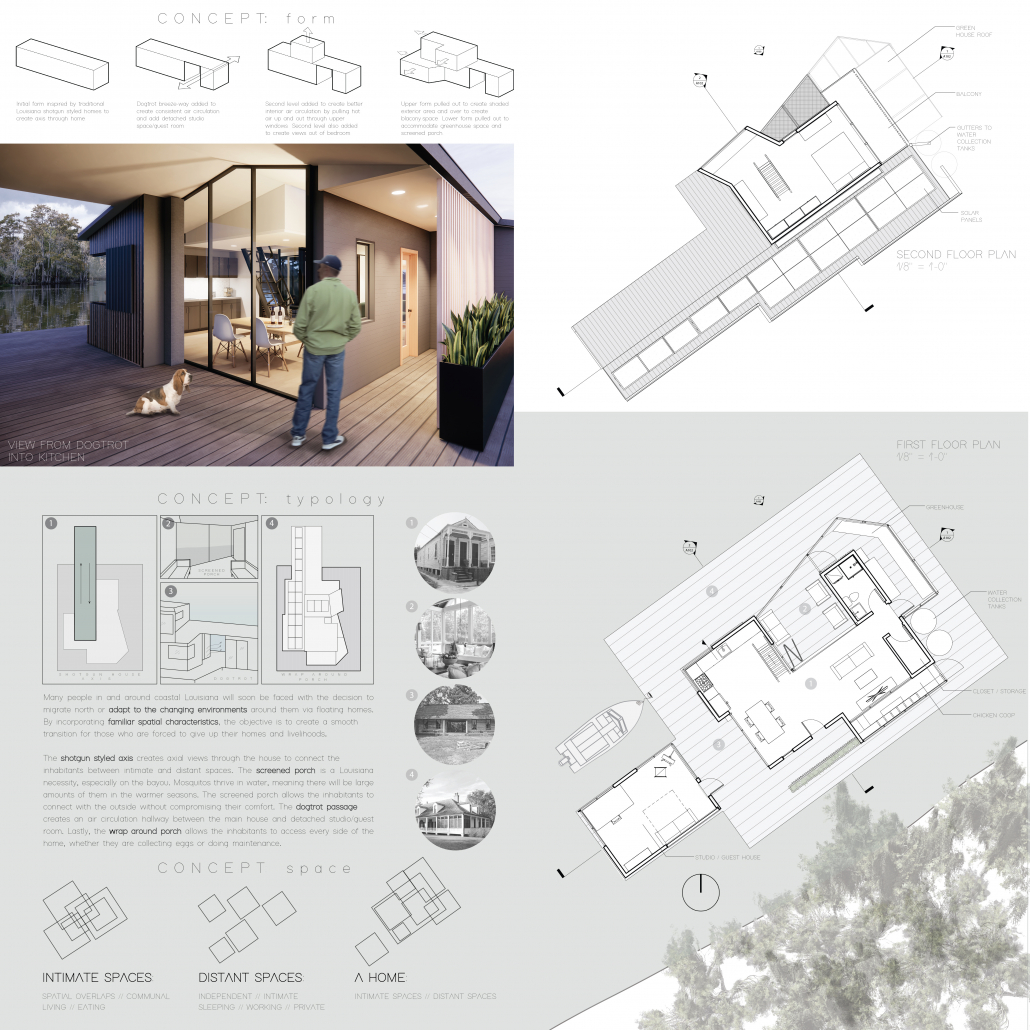 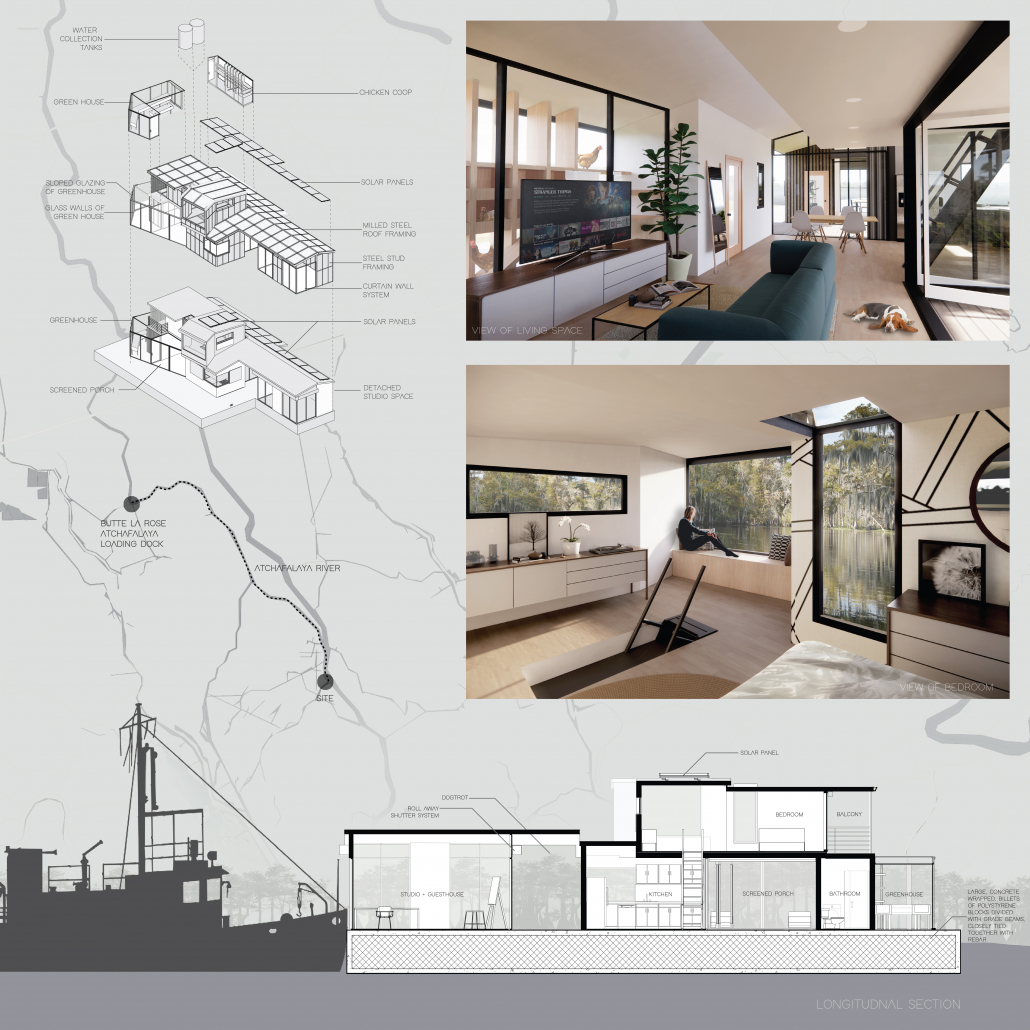 FLOAT – A 21st Century Floating Home Post Sea Level Rise is a creative project that is innovative in dealing with climate change and sea-level rise. The well-developed plans and diagrams show a sensitivity to material and detail. The design demonstrates a realistic approach of water recycling and building systems.

As the coastline erodes and the waters rise, Louisiana’s rich culture is at risk of near extinction. Ironically, the culture that thrives on its proximity to water simultaneously lives in fears of it. According to the New York Times, land is disappearing at the alarming rate of a football field per hour and there is only so much time for the coastal regions of Louisiana to prepare for the inevitable. While measures are in effect to slow down erosion of the coast, funding is unable to keep up with the extreme pace of the rising waters that threatens to erase the rich Louisiana culture.

FLOAT brings new possibilities to the inhabitants of coastal Louisiana as well as other regions that are impacted by the threat of rising waters. Rather than fighting against nature, FLOAT adapts to live with it. With the ability to rise and fall with changing water levels, this project offers an innovative solution for the constant fear of flooding that Louisiana residents face. Instead of building on land, we will dwell atop the water. The rural site is located in the tranquil 2A climate zone of the former Bayou Chene community area. This semi-isolated, adaptable residence was designed to act as a prototype for floating homes throughout Louisiana’s waterways. The clients are a husband and wife duo, designer, and environmental scientist, who are on a mission to solve the environmental crisis Louisiana is facing. By designing, building, and living in a home that sustains itself, they are able to show Louisianians that this lifestyle is attainable to anyone who is willing to live on Louisiana’s vast and unique waterways.

Several traditional and familiar spatial characteristics have been incorporated in the design to create a smooth transition for those forced to give up their homes and livelihoods as a result of the rising waters and coastal erosion. First, a traditional shotgun organizational axis creates clear views through the house and directly to the bayou. This axis not only connects the main house and detached studio, but can also be experienced from the living room, dining area, and studio. Next is the screened porch, a Louisiana necessity when considering the mosquitos that thrive in wet areas. A screened porch allows residents to enjoy a meal during sunset on the basin without sacrificing their comfort. Additionally, a dogtrot passage was incorporated to create an air circulation hallway between the main house and detached studio. This passive strategy pushes the hot air out and brings in cooler air. Lastly, the wrap around porch allows for the residents to access every side of the home, whether they are collecting eggs from the chicken coop or performing home maintenance responsibilities.

While the home has the ability to adapt to the rising and falling water levels, there are certain things one has to make a conscious effort to adapt to. FLOAT has several passive systems that allow for the home to be self-sustaining and self-sufficient. The main source of energy on the floating home comes from the solar panels that are located on the roof. These power everything from the water heater to the air conditioning and allow for the home to feel like a normal power-grid functioning home while being energy efficient and sustainable. There are also two large water collection tanks on the side of the home that are filled by the gutter system that lines the edges of the roof. There are two holding tanks which are stored in the foundation of the floating home. One holds sanitized water, which is filtered through a reverse osmosis machine, making the water potable. The other holds filtered water, which is used for the toilet and greenhouse. The accessibility of food may normally be a concern for those residing on a floating home in a secluded area, but FLOAT has two major systems that allow for the home to produce sustenance for itself. First, there is the chicken coop which is attached directly to the living room. This structure doubles as a shading device for the home while housing several chickens for poultry and the production of fresh eggs. There is also a greenhouse that is attached to the house, accessible from the screened porch or the living room, which allows the residents to grow their own food year-round.

A major consideration that must be made when designing for Louisiana are hurricanes. Annually, hurricane season is from the beginning of June until the end of November and is a very real threat to the residents of Louisiana; especially those on or near water. Being in the Gulf of Mexico, Louisiana and neighboring states are frequently confronted with hurricanes; if they are lucky to be missed by one’s disastrous route, they will usually feel its effects through serious storms. FLOAT has a series of shutter systems – steel rollaway, sliding, and folding shutters – that are incorporated on all of the specific openings of the structure. With these systems in place, residents have the ability to safely leave their home as they wait for the storm to pass.

FLOAT is a diverse mix of various systems that, as a whole, create a new type of home. A home that allows residents of Louisiana to confidently stay in the place they love without the constant worry of the impending landscape. This prefabricated home can be brought to any loading dock and transported to the desired site by tugboat. This transportability allows a new availability to potential home buyers for sites that would normally be uninhabitable. Not only does this home create a sustainable way of life, but it allows people to venture and dwell in new environments.