I Made That
Home » AASL » Call For Feedback: The ACRL Visual Literacy Companion Document Draft

In 2009, a group of librarians interested in quality research and instructional image content formed the Image Resources Interest Group within the Association of College & Research Libraries (ACRL) to focus on the particular affordances and challenges of visual information. That same year, the inaugural Visual Literacy Task Force was formed to craft a set of standards that would complement the now rescinded 2001 ACRL Information Literacy Competency Standards for Higher Education (Information Literacy Standards). The resultant standards, the 2011 Visual Literacy Competency Standards for Higher Education (Visual Literacy Standards)  highlighted ways in which visuals are distinct from other information types.

In the years following the publication of the Visual Literacy Standards, librarians began to engage with threshold concepts, metacognition, and metaliteracies, reflected in the 2016 ACRL Framework for Information Literacy for Higher Education (Framework), which replaced the Information Literacy Standards. Ongoing critical conversation continues to shape how learners are taught to create, use, share, and assess information in the twenty-first century. Addressing these shifts, ACRL assembled several task forces in 2018 to develop Framework Companion Documents and update disciplinary literacy standards documents. In this spirit, the current Visual Literacy Task Force was formed by the Image Resources Interest Group to update the 2011 Visual Literacy Standards.

At the outset we acknowledged that visual literacy and related terminology remained difficult to define due to variations in use and meaning across disciplines. We also recognized that mapping to the Framework would be a challenging exercise. Success would require the participation of  thoughtfully engaged stakeholders. Therefore, we began by conducting an IRB-approved qualitative research study.[1] From fall 2019 to spring 2021, we interviewed a broad community of practitioners and scholars, including architecture and planning librarians. Participants were asked to

define visual literacy, identify necessary skills and competencies for their discipline, and discuss what they perceived as challenges and opportunities.

By coding the interviews, we identified four themes that serve as the backbone for the current Visual Literacy Framework Companion Document draft. These themes are:

The first concept, “Perceive visuals as communicating information,” reflects participant feedback that visuals are themselves information. With the advent of social media and online environments everyone is a creator, and visuals can now act as evidence or rhetoric. The second theme “Participate in a changing information landscape” addresses the medium or platform. Our survey respondents discussed ideas around new digital ethics, remix culture, multimodality, and the lifecycle of visuals. The third concept, “Practice visual discernment and criticality” describes the impact of the first two, given the rise of malinformation, misinformation, and disinformation, and the concurrent need for critical viewing, thinking, and reflection. Rather than create a distinct fourth category, we chose to interweave the concept “Pursue social justice through visual practice” throughout  the other three. This approach is intended to highlight  the urgency of social justice principles. Some highlights of this theme include: access and accessibility, equity, representation, cultural appropriation, Indigenous knowledge, algorithmic shaping of experience, diversity, inclusion, power dynamics, and decentering whiteness. In the twenty-first century’s rapidly evolving information ecosystem, visual literacy is essential to  discerning, ethical citizenship. 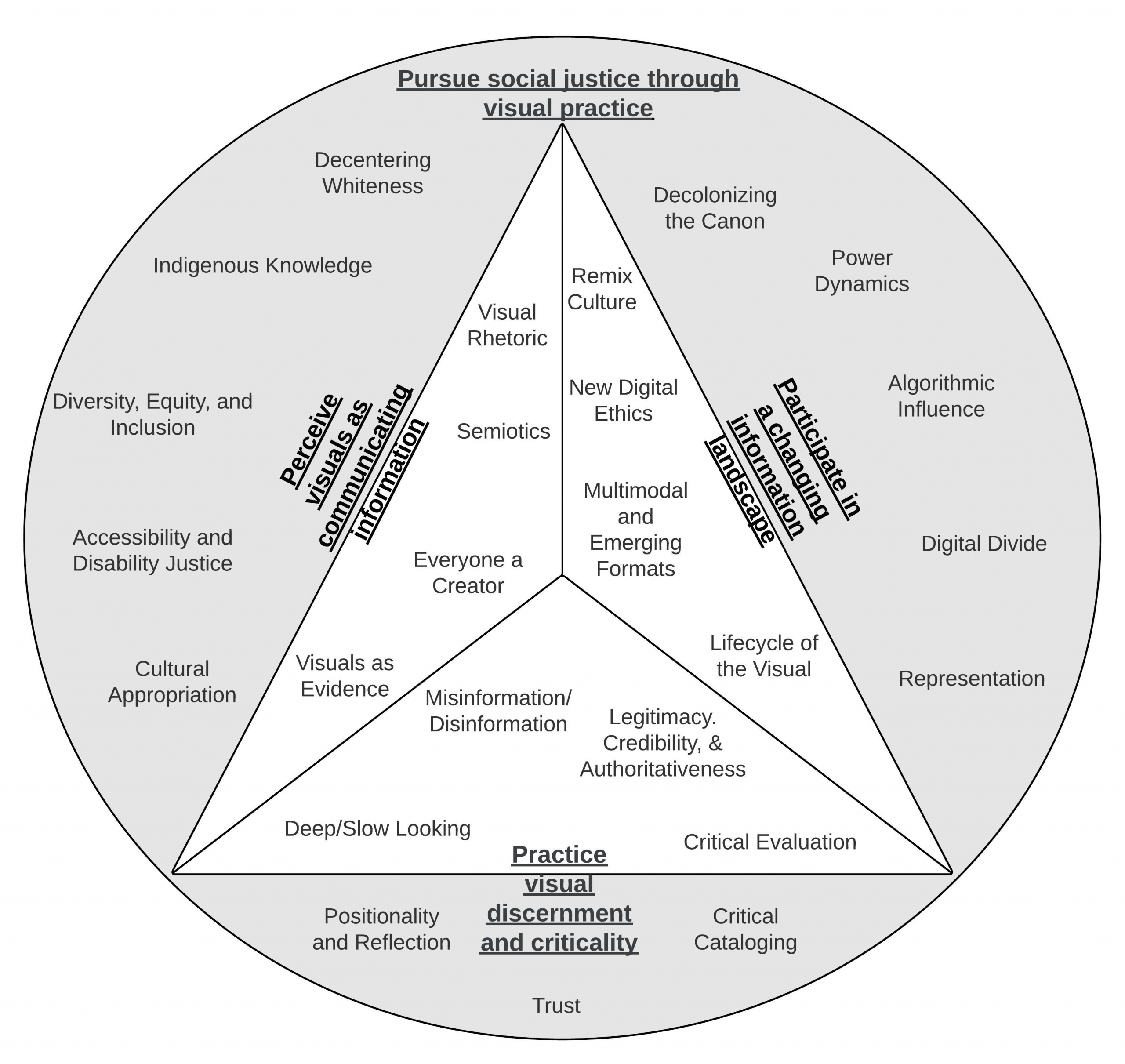 We are currently seeking feedback from stakeholders on the Visual Literacy Framework Companion Document. As recognized experts, we are asking architecture and planning librarians to consider how this document might impact other areas of work in instruction and collections. How could it be improved to better align with community needs? We thank AASL members in advance for your effort and input to ensure this document is thoughtful and, importantly, useful to AASL’s community.

We will be seeking stakeholder feedback to the Companion Document draft in mid-June 2021. Participants will find the draft in various formats to facilitate accessibility, and feedback options on the Task Force website: http://acrlvltf.org/feedback.  If you have any questions, please contact us: vltfacrl@gmail.com