The ACSA Board of Directors has made increasing diversity in ACSA member schools a visible and continuing set of conversations and actions. The issue of diversity in the academy and the profession encompasses a range of complex, interrelated issues, but the time for action to increase the inclusion of underrepresented groups is now.

The Education Committee leads ACSA’s efforts to improve the effectiveness of architectural education through best practices. The committee oversees and recommends, as necessary, actions to cultivate and disseminate these best practices.
Read Full Report

The objective of this exercise is to record your journey as you consider or complete an education in architecture, framed in the context of socio-economic equity. Please document the advantages and barriers you encountered as you considered an architectural education.  You will be recording your experiences and documenting your progress.  To ensure a rich collection of findings, you are encouraged to document your journey regardless of your current status, even if you are no longer considering architectural education.

Instructions
I. At the top of the sheet check a box indicating your current status (high school student, community college student, undergraduate student, or graduate student). If “other” please explain briefly.
II. Identify where you are on your journey by placing a line across the path. Everything before the line is your history. Everything after the line is your plan for the future. Please predict your future path as completely as possible, even if you indicate you are undecided.
III. In the dashed, boxes record your experiences along your path. Experiences may be positive or negative. Please indicate these characteristics by using (+) or (-) adjacent to your experience. Consider sharing the obstacles or advantages you encountered along your journey, such as: o What experience(s) helped you make decisions?
IV. Other? If you have advice you would like to share with others who may be considering a similar path, please clearly indicate it is advice, not your personal experience.. 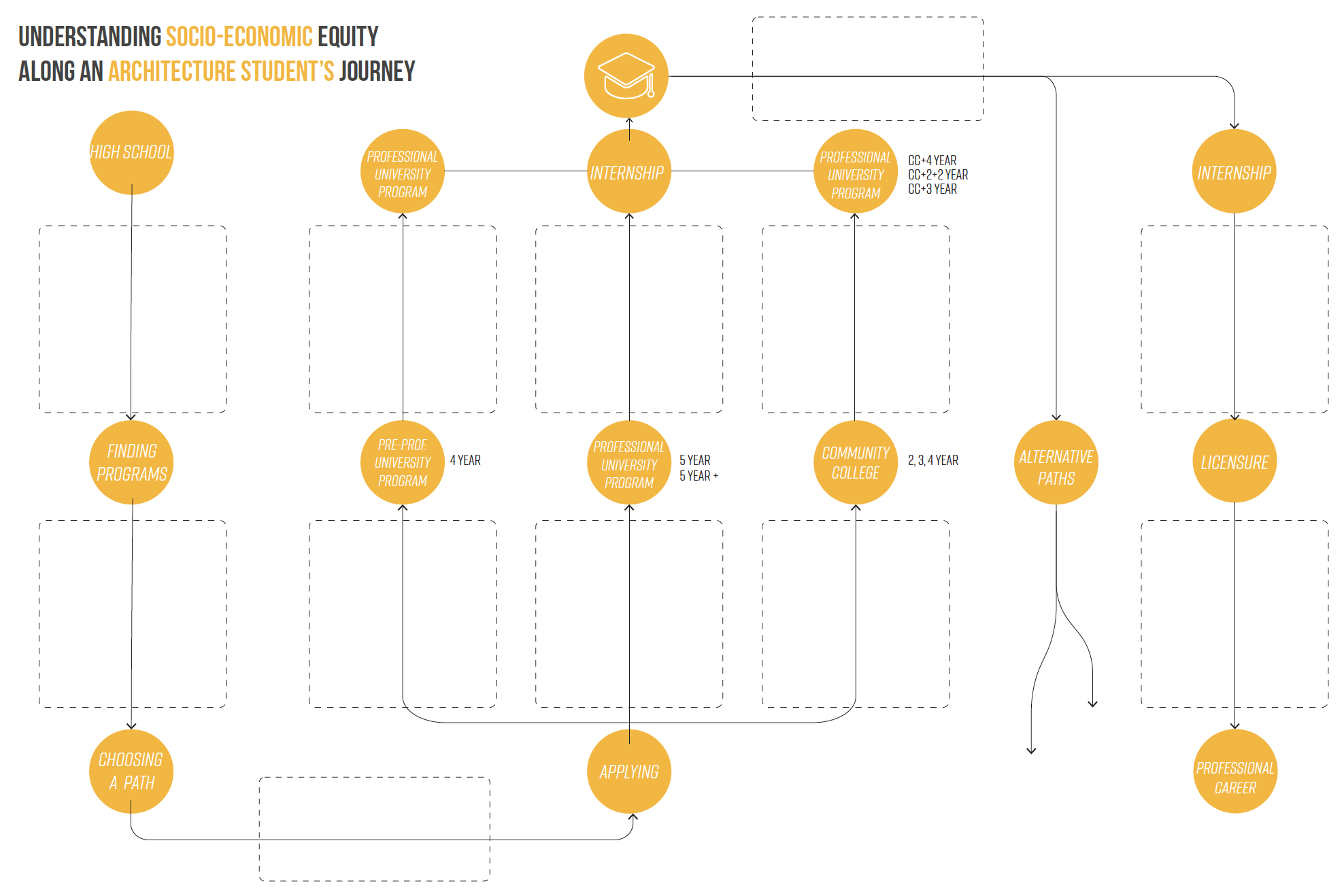 The ACSA Board of Directors resolves to make increasing diversity in ACSA member schools a visible and continuing set of conversations and actions in 2008-09. The issue of diversity in the academy and the profession encompasses a range of complex, interrelated issues, but the time for action to increase the inclusion of underrepresented groups is now.

ACSA can support schools in their efforts to have a diverse student body and increase diversity among faculty who are able to effectively mentor all students to pursue varied careers in architecture.

The following actions are proposed:

Designing for Diversity
Panel Session, 2009 ACSA National Meeting, Portland, OR
ACSA is committed to improving diversity in its member schools by developing information about best practices that are emerging nation-wide. The purpose of this session will be to highlight programs and initiatives at ACSA member schools that have had significant impact on diversity by creating a climate of inclusiveness, respect, and civility. The session will focus on actions that work, programs that have transformed the academic landscape, and initiatives that have demonstrated success.

LGBT Breakfast Meeting
2009 ACSA National Meeting, Portland, OR
An open invitation to Lesbian, Gay, Bisexual and Transgender (LGBT) colleagues, as well as other ACSA members, to discuss issues that commonly impact the LGBT community in academia and the profession. This informal gathering should provide an opportunity to exchange views on issues including tenure and promotion, workplace issues, partner benefits and mentoring as they pertain to the LGBT community.

Women’s Leadership Council
2009 ACSA National Meeting, Portland, OR
This session will discuss issues that affect women faculty. We will focus on three types of faculty: those at non-tenure granting institutions; tenure-track faculty; and tenured faculty who are seeking promotion or administrative positions. The session will open with brief introductory remarks by invited panelists, followed by facilitated break-out sessions for the three groups, and end on a discussion focusing on the development of action items. Later in the evening, there will also be a WLC reception, sponsored by the Beverly Willis Architecture Foundation, which will allow for more informal discussion.

Design and Diversity
Panel Session, 2008 ACSA Administrator’s Conference, Savannah, GA
ACSA has committed to addressing the evolving nature of diversity in academia and in the architecture profession. In 1968, Whitney Young challenged the American Institute of Architects with his words, “…as a profession, you are not a profession that has distinguished itself by your social and civic contributions to the cause of civil rights, and I am sure this has not come to you as any shock. You are most distinguished by your thunderous silence and your complete irrelevance.” (20 on 20/20 Vision, Perspectives on Design and Diversity, AIA Diversity Committee and Boston Society of Architects, 2003) How far have we come since 1968? Are we still stalked by the sobering challenges that echo from Whitney Young’s speech made over forty years ago? This panel will engage evolving definitions of diversity, civility, inclusion, equity, and respect that challenge academia and the profession as it moves into the 21st century.

Anthony, Kathryn H. Designing for Diversity: Gender, Race, and Ethnicity in the Architectural Profession.  Urbana and Chicago: The University of Illinois Press.  © 2001.

Face of the AIA (series by by Stephen A. Kliment, FAIA Contributing Editor), from AIArchitect:

Robert Robinson Taylor (June 8, 1868 – 1942) was an American architect; by some accounts the first African American Architect in the United States. Taylor enrolled at Massachusetts Institute of Technology in 1888, the first African American student at MIT, and was associated with Tuskegee University once called Tuskegee Institute, designing most of the buildings on campus completed prior to 1932, and even serving as second-in-command to Tuskegee’s founder and first President, Dr. Booker T. Washington. He died while attending services at the Tuskegee Chapel, a building he considered his finest achievement. (from Wikipedia)

Panelists representing a spectrum of contexts discuss the roles and paths of leadership across the breadth of the discipline. What are the possible positions of leadership to move up to? What preparation do you need to succeed (degrees, mentors, experience, portfolio, etc.)? How does it fit into one’s overall life?