The City College of New York 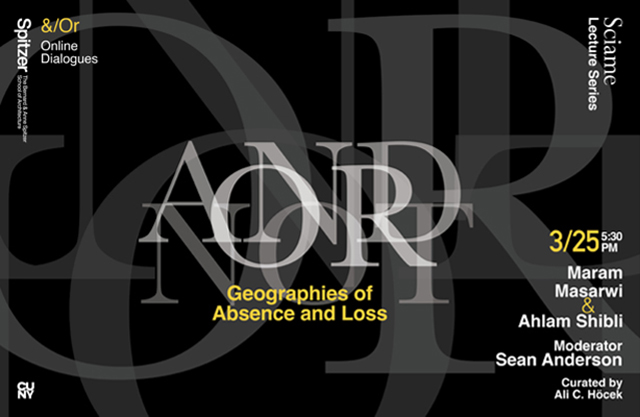 Please join us for the new SCIAME Lecture Series, titled And/Or. “Geographies of Absence and Loss” will feature Maram Masarwi and Ahlam Shibli, hosted by Sean Anderson, for a discussion of art and architecture.

Free and open to the public – Please register for this Zoom event here.

In this online series, curators Viren Brahmbhatt, Ali C. Höcek, and Martin Stigsgaard argue that the traditional format of a single lecturer speaking to an audience sets up a binary opposite all of its own — speaker/listener, which simply reinforces the power structure between those who “possess” knowledge and those who “consume” it. In its place, the &/Or Online Dialogues will present two speakers in conversation with each other, moderated by a third. The series features prominent artists, activists, and architects from across the globe who will discuss their work and the unique political and environmental challenges they confront.

Maram Masarwi is currently a lecturer and researcher at Tel Aviv University and the head of the Education Department at Al Qasemi College of Education.  Masarwi holds a PhD from the Department of Social Work at Hebrew University. Her dissertation addressed “gender differences in bereavement and trauma among Palestinian parents who lost their children in the Al-Aqsa Intifada.”  Masarwi was a postdoctoral Fellow at the Europe in the Middle East-The Middle East in Europe (EUME), Forum of Transregional Studies at the Free University of Berlin. Her areas of research have included Palestinian archives, memory and commemoration in Palestinian society, loss and bereavement in Palestinian society, and gender and nationalism in the Middle East. Among her resent publications are The Bereavement of Martyred Palestinian Children: Gendered, Religious and National Perspectives (2019) and “Dialectic of the National Identities in Palestinian Society and Israeli Society: Nationalism and Binationalism,” in The Arab and Jewish Questions, Geographies of Engagement in Palestine and Beyond (2020).

Ahlam Shibli was born in 1970, in Palestine. Through a documentary aesthetic, her photographic work addresses the contradictory implications of the notion of home; it deals with its loss of and the fight against that loss, as well as with the restrictions and limitations that the idea of home imposes on individuals and communities marked by repressive identity politics.

Shibli’s work has been presented in solo and group exhibitions internationally. Her work includes the photographic series Staring (2016–2017), photographed in both al-Khalil/Hebron (Palestine) and Kassel (Germany). Her series Heimat (2016–2017) refers to expellees and refugees of German descent and the so-called guest workers, or Gastarbeiter, from the Mediterranean region, both of whom migrated to Kassel and the surrounding area as a result of the Second World War. Occupation (2016–2017), another series of photographs, is based on the destruction of Palestinian livelihoods in al-Khalil/Hebron and the occupied territories by the Israeli colonial regime and the actions of Zionist settlers. Ramallah Archive (2014) points to ways of reorganizing collective and individual existence encountered in files and photographic negatives found in the Ramallah Municipality Archive. Death (2011–2012) shows the efforts of Palestinian society to preserve the presence of those who have lost their lives fighting against the Israeli occupation. Eastern LGBT (2004/2006) illustrates the bodies of lesbian, gay, bisexual and transgender people from Oriental societies as a contested primary home. These and other of Shibli’s works have been extensively exhibited and published, including the monographs, Ahlam Shibli (2020) and Ahlam Shibli: Phantom Home (2013).

Sean Anderson is Associate Curator in the Department of Architecture and Design at The Museum of Modern Art. A Fellow of the American Academy in Rome, he has practiced as an architect and taught in Afghanistan, Australia, India, Italy, Morocco, Sri Lanka and the U.A.E. His second book, In-Visible Colonies: Modern Architecture and its Representation in Colonial Eritrea (2015), was nominated for an AIFC Book Prize in Non-Fiction. In 2020, he co-curated the exhibition On Muzharul Islam: Surfacing Intention at the Dhaka Art Summit. At MoMA, he has organized the exhibitions Insecurities: Tracing Displacement and Shelter (2016-17), Thinking Machines: Art and Design in the Computer Age, 1959-89 (2017-2018), as well as collaborative collection displays including Surrounds (2019), Inner and Outer Space (2019-2020), and Building Citizens (Present). Sean manages the Young Architects Program (YAP) and the Issues in Contemporary Architecture series. His next exhibition, co-organized with Mabel O. Wilson, Reconstructions: Architecture and Blackness in America, opens on February 20, 2021.