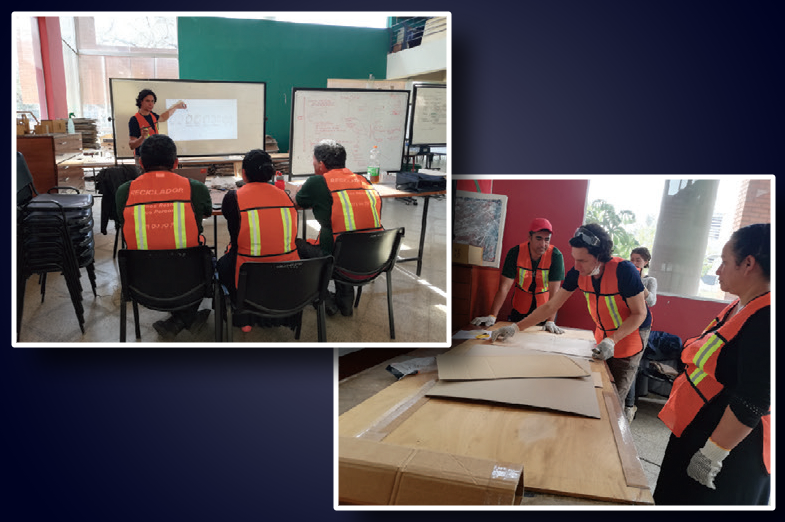 UNIVERSTY PARK, Pa. — The work of the Department of Architecture’s Autonomous Builders Collective (ABC) in the Stuckeman School using waste cardboard to develop resilient, low-cost housing has been accepted into the Seoul Biennial of Architecture and Urbanism 2021. The show, which has a theme of “Crossroads, Building the Resilient City,” opens on Sept. 16 and runs through Oct. 30.

Marcus Shaffer, associate professor of architecture and the director of the ABC, along with lab members Elena Vazquez, an architecture doctoral candidate and Julio Diarte, a doctoral candidate in architecture who recently defended his thesis, have been invited for their entry titled, “Tapping into Urban Recycling for Low-cost/No-cost Housing Solutions: Using Waste Cardboard to Build and Sustain the Resilient City.” In their submission, the trio proposes a series of workshops in Seoul during which the lab members would work with informally employed waste collectors around the city to explore the potential of using post-consumer waste cardboard and common, discarded vinyl flooring to produce cast concrete building elements, such as screens, blocks, beams, floor slabs and window frames.

According to Shaffer, the ABC’s creative mission to “develop and/or revitalize building technologies and material strategies that empower people to create and realize architectures for themselves” neatly aligns with the focus of the 2021 biennial, which is “considering the city of tomorrow as a collective invention.”

The team’s work, which will be displayed in the Cities category of the biennial at Zaha Hadid’s Dongdaemun Design Plaza, will include cast artifacts, process videos and ‘how-to’ documentation produced in lab workshops, as well as cardboard-based building elements, tools and material studies. The project builds on the extensive doctoral work of Diarte on waste cardboard-based architecture and community workshops, and on Shaffer’s experiences with waste cardboard-based concrete formwork in the first-year architecture studios in the Stuckeman School

Some of the objects and tooling to be displayed by the team in Seoul were created by Diarte, Shaffer and Vazquez in the Stuckeman Building Yard, and they represent a range of architectural technologies, including hand-crafted objects and building components largely fabricated through digital workflows and tooling. Through their proposal, the group seeks to match recycling scenarios, housing needs and the building skills transmission tested by Diarte’s work in Asunción, Paraguay to similar conditions and needs in Seoul.

“Being accepted to exhibit our work on waste-cardboard reuse for architecture at the Seoul Biennial 2021 is a great honor,” said Diarte. “The Biennale motivates us to advance the project at a distinct level, exploring waste cardboard-based architecture at the scale of a city like Seoul, a city that has a strong cardboard recycling culture and paper use tradition in architecture.”

Shaffer is particularly happy to take Stuckeman School work to Seoul, where he spends his summers, often accompanied by students who participate in the Department of Architecture’s Korea/Japan Summer Study Abroad Program for design majors.

Held every two years, the Seoul Biennial was established in 2017 as an event that focuses on cities and gathers their representatives to discuss the challenges linked to the urban condition and share their potential solutions. With 10 million inhabitants, Seoul is one of the most representative examples of contemporary metropolises and, as such, a particularly relevant context to frame the event.

More information about the Seoul Biennial can be found here.