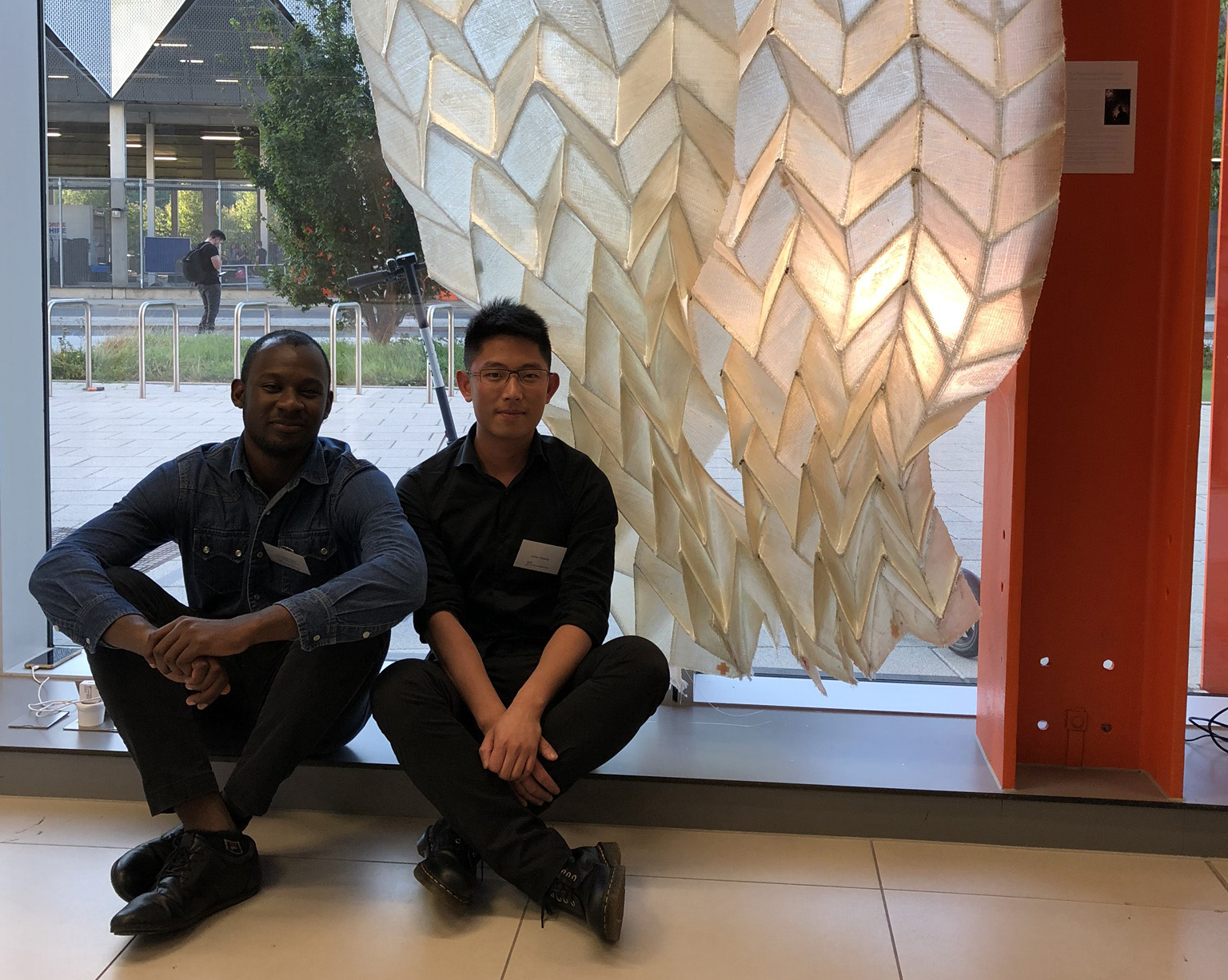 UNIVERSITY PARK, Pa. – As part of a project developed for an architecture elective course on responsive fiber composites, two recent landscape architecture graduates and their instructor traveled to London in September to display their work at the Textile Intersections conference.

Julian Huang and Jimi Demi-Ajayi, who both graduated in the fall of 2018, along with Felecia Davis, an assistant professor in the Department of Architecture who also directs the SOFTLAB in the Stuckeman Center for Design Computing, installed their “Phototropic Origami Fiber Composite Structure” project at the two-day event. Hosted by the Textile Design Research Group at Loughborough University, the conference was designed to explore collaborations in textile design research.

The project was sponsored by the American Composite Manufacturers Association, which lent the group its expertise and project materials. Students from both the Stuckeman School and Carnegie Mellon attended a workshop for the project that was held at Penn State in February 2018. The purpose of the workshop was to introduce students and faculty to the architectural applications and case studies using fiber composites. Fabrication techniques for fiber composites were demonstrated in the Penn State Stuckeman Family Building Shop.

According to Davis, her team’s project was inspired by “Chakrasana,” an accordion art pavilion that was developed by Joe Choma, assistant professor of architecture at Clemson University. Davis and her architecture and landscape architecture students developed a responsive fiber composite foldable structure by embedding conductive and resistive yarns into a fiberglass knit fabric.

“We used origami as a method to make folds in the fabric allowing the structure to collapse and be flat,” Davis said. “We hoped to make a lightweight portable structure that could take on different shapes when clipped and positioned. This could be used as a shelter in a landscape setting or as a portable structure.”

Davis explained that they embedded a conductive thread that carries an electric current up a length of fiberglass knit that could then carry an electronic signal to a series of LED lights, which are sewn on to the front side of their origami project.

“These LEDs are connected to a photocell that turns the LEDs on and off according to the level of light,” Davis said. “In bright daylight, the LEDs are off and as evening arrives the LEDs are on.”

Demi-Ajayi said that one of the goals of the conference was to integrate cross-disciplinary collaborative research efforts beyond their current work.

“We set up our interactive origami pavilion structure at the conference and exchanged ideas with distinguished guests,” he said. “Overall the event was extremely informative and a lot was learned from the different demonstrations and lectures we attended at the conference.”

When asked about the importance of the conference to other students in architecture, landscape architecture or engineering, Huang added that some of the research that was presented at the conference has great potential for real-world applications.

“There was a chemist who spoke about his research on some interesting aspects of fabric including the development of a suit that could detect low heart rate and other health issues,” Huang said. “Sensors are embedded into the chemical level of the suit material so it would show you when your blood sugar or cholesterol level are high based on sweat. I think people need to know about this invention and be more informed of the potential of the textile industry.”