I Made That
Home » ACSA News » Life on the Mississippi

Life on the Mississippi 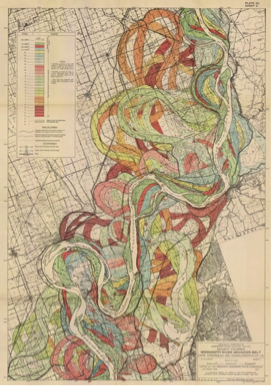 Take the first left traveling north on the Mississippi River past St. Louis and you will hit Three Forks, Montana, the headwaters of the Missouri River, 2,000 miles later. The big Y down the middle of the US map, which encompasses nearly two thirds of the country, is the watershed of the Mississippi River. The red dot, just south of the confluence or the convergence of the Y, marks what former president of the Missouri Historical Museum Robert Archibald called, the geographical determinacy of the location of St. Louis. It seems that St. Louis is where it should be.

As I write a closing statement as president of ACSA, I am happy knowing that ACSA too, is where it should be. However, the beautiful map that describes the many courses of the river over time reminds us that we live in a dynamic relationship between time and place that requires our constant attention. While I will serve one more year as past president, I am confident that with the leadership of Francisco Rodriquez-Suarez, Branko Kolarevic, and Rashida Ng, along with the entire board of directors and executive director Michael Monti and staff, the organization is in good hands.

I had not planned to make a list of this last year’s work, but I can’t resist, knowing that much of what follows has been ongoing for a long time and is a reflection of a point in time for the organization, thanks to the hard work of so many:

A familiar point of discussion among the collaterals has been the value of architecture and its perception. ACSA has remained steadfast in advocating that diversity is directly related to the value and influence of architecture. Of the five collateral organizations, two are directly related to architectural education, ACSA and NAAB. The other three, however, are dependent upon architectural education in a way that has often pitted the academy against the profession. Organizational defensive routines notwithstanding, we need to continue to close this gap in the arc, and I see progress. One reality is that while programs and faculty are committed to preparing graduates for the profession, that is not all that they are committed to. The totality of these commitments is what gives me great optimism for the future of architectural education. Schools are increasingly being driven by three meta themes; research, engagement, and experimentation. Research and engagement in the face of climate change, equity and poverty, the list goes on, is what keeps experimentation from being an academic exercise and leads graduates to exercise architectural intelligence as well as architectural expertise across a wide spectrum of domains. We will all be the beneficiary. Here again, diversity in our schools as well as in our profession is one of our greatest opportunities, recalling the map of the Mississippi River, this time as our map forward.