I Made That
Home » School News » University of Arkansas 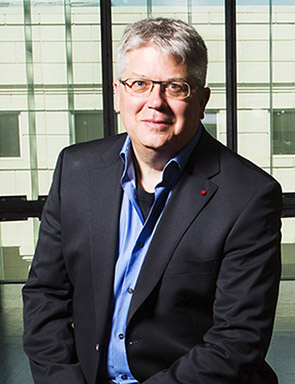 Peter MacKeith began his appointment July 1, 2014, as the new dean of the Fay Jones School of Architecture at the University of Arkansas. He arrives in the school after a distinguished 15-year career at the Sam Fox School of Design and Visual Arts at Washington University in St. Louis, where he rose to tenured full professor and associate dean. He is an internationally recognized design educator whose work encompasses architectural design, design research and publication, and exhibition curation and design. He has spent 25 years as a liaison between the design cultures of the United States and the Nordic nations, particularly Finland.

Links to interviews and announcements about Peter may be found here:

Marlon Blackwell, Distinguished Professor and head of the Department of Architecture in the Fay Jones School of Architecture, has received a $50,000 fellowship grant from United States Artists, a national grant-making and advocacy organization. United States Artists awards several fellowships each year, under names such as Ford, Rockefeller and Knight. Blackwell, who was awarded a Ford Fellowship, is one of 34 artists to receive a 2014 United States Artists fellowship. The Fellows were selected from 116 nominated artists living in the United States and Puerto Rico and were chosen by a panel of expert peers in each artistic discipline. Blackwell, honored in the Architecture and Design category, is a nationally and internationally recognized teacher and one of the nation’s most respected regional modernist architects. He is founder and principal at Marlon Blackwell Architects, based in Fayetteville. Blackwell is the second faculty member from the Fay Jones School to receive this prestigious honor from United States Artists. Steve Luoni, director of the University of Arkansas Community Design Center and a Distinguished Professor, was named a Ford Fellow in 2012. The Fay Jones School joins the ranks of Columbia University, the University of California, Los Angeles and Southern California Institute of Architecture for having multiple members of their faculty selected in the USA Fellows program since it began in 2006.

The home of the Fay Jones School of Architecture – the renovated Vol Walker Hall with its new addition, the Steven L. Anderson Design Center – has been chosen as a finalist in the 2014 World Architecture Festival Awards, the world’s largest architecture design awards program serving the global community.

More than 400 projects from more than 40 countries were short-listed across 31 individual award categories for the festival, to be held this week in Singapore. The Vol Walker Hall project is one of 16 short-listed projects in the Higher Education and Research category. This project is the only one in its category to represent the United States.

“The team believes that the Fay Jones School of Architecture provides an active learning environment that emphasizes knowledge through drawing, modeling, and experiential design,” stated the visiting team in its summary. “Administration, faculty, and students are committed to design for a new decade that engages community, new technologies, and environmental awareness. The team was impressed with the vitality of the student body, their dedication to community engagement and sustainability, and their passion for architecture.”

In July, the National Architectural Accrediting Board met to review the Visiting Team Report, the product of a three-member team’s visit to the Fay Jones School in February. The directors of the National Architectural Accrediting Board voted to continue full accreditation for the new maximum term of eight years. The Fay Jones School architecture program is scheduled for its next accreditation visit in 2022

Marc Manack and Frank Jacobus, both assistant professors of architecture in the Fay Jones School of Architecture and co-principals of the architecture firm SILO AR+D, have won an award for their project, the Super Sukkah.

Their project was one of the 10 cutting-edge sukkahs selected in the competition, “Sukkah City STL 2014: Between Absence and Presence.” The 10 winning projects, chosen from a field of 33 entries, were created both by individuals and teams of architects and designers from around the country. The winning projects of the competition will be on display from Oct. 7 to 12 at Washington University in St. Louis. Each winning entry receives a $1,000 honorarium to defray construction costs.

A plan to transform four neglected blocks of Main Street in downtown Little Rock into an arts district has won a 2014 Honor Award from the American Society of Landscape Architects. Faculty and staff members of the Fay Jones School of Architecture at the University of Arkansas designed this award-winning work.

The Creative Corridor, designed by the University of Arkansas Community Design Center and Marlon Blackwell Architect won an Honor Award for Analysis and Planning, one of five awarded. This is the design center’s sixth ASLA award and the fifth that they have received in this category. The ASLA award represents the highest recognition in landscape architecture design and planning open to North American organizations for work underway worldwide. Thirty-four award-winning projects were selected from more than 600 entries.

Fay Jones School of Architecture students and faculty have a unique opportunity to be involved with the public display of a 60-year-old house designed by Frank Lloyd Wright. Crystal Bridges Museum of American Art in Bentonville acquired the Bachman Wilson House, built in 1954 near the Millstone River in New Jersey. It has been disassembled and transported to the museum’s 120-acre grounds, where it is being reconstructed. This home is one of Wright’s “Usonian Houses,” a group of 60 middle-income family homes that were typically small, single-story structures with no garage and minimal storage. They used native materials, flat roofs and cantilevered overhangs, and emphasized a strong visual connection between interior and exterior spaces.

In collaboration with Crystal Bridges, Fay Jones School students, led by Santiago R. Pérez, Assistant Professor and 21st Century Chair in Integrated Practice, are in the final “prefabrication phase” of a three-semester effort to design, develop and fabricate a small architectural interpretation pavilion for the Bachman Wilson House reconstruction on the museum grounds.

This initiative is a confluence of “Design-Build” and “Digital-Fabrication” cultures and practices, informed by Usonian principles, into a hybrid DESIGNFAB practice model, championed by Pérez. In conjunction with the Pavilion project, Pérez delivered a lecture at Crystal Bridges titled “Rethinking Wright: Adapting Usonian Principles in 21st Century Architecture.”

In addition, during the fall 2014 semester, Fay Jones School students will analyze and document the reconstruction of the house for inclusion in the Historic American Buildings Survey, under the leadership of professor Greg Herman.