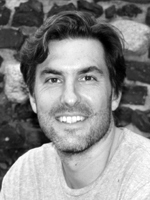 Washington, D.C., July 5, 2013 – Marc J. Neveu, Ph.D., of the Wentworth Institute of Technology has been named Executive Editor of the Journal of Architectural Education (JAE) for a four-year term starting July 1, 2013. Neveu has previously contributed to the JAE as a writer, a reviewer, a theme editor, and, most recently, as an Editorial Board member and Associate Editor of Media Strategies. The JAE has been the primary venue for research and commentary on architectural education since it was founded in 1947. Published twice a year, the JAE is the longest running journal of its kind, with an estimated circulation of over 10,000.

“As the most important peer-reviewed journal in our field, the JAE plays a fundamental role in the development of emerging faculty as well as providing a place for established academics to shape contemporary issues,” says Neveu. His goals for the publication lie in developing both the print and online platforms to advance future scholarship and to lead current architectural discourse.

“Marc presented a clear vision for the future of the journal: to broaden its audience and authorship and to strengthen the relationship between JAE and ACSA initiatives,” said ACSA President Norman Millar.

Neveu graduated with a professional degree in architecture from Wentworth after which he went on to complete a post-professional M.Arch and Ph. D. at McGill University in Montréal. While working on his dissertation Marc was awarded a Fulbright Fellowship for study in Venice and a Collection Research Grant at the Canadian Centre for Architecture. Neveu has taught at the University of Manitoba in Winnipeg, California Polytechnic State University in San Luis Obispo, and was a visiting faculty member at SCI-Arc in Los Angeles. In 2011 he began work in the Department of Architecture at Wentworth where he teaches history/theory and studio.

About the Journal of Architectural Education
The Journal of Architectural Education (JAE) has been the primary venue for research and commentary on architectural education since it was founded in 1947. In 1982 the JAE established a blind-peer-review process, making it the oldest continuing operating journal of its kind. The JAE is published by the Association of Collegiate School of Architecture (ACSA) through Taylor and Francis. The types of articles the journal publishes include: Scholarship of Design, Design as Scholarship, Op Arch, Translations, Transactions, Interviews, and several form of review, from buildings + projects to books and symposia. www.jaeonline.org

About the Association of Collegiate Schools of Architecture
The Association of Collegiate Schools of Architecture (ACSA) is a nonprofit, membership association founded in 1912 to advance the quality of architectural education. The school membership has grown from 10 charter members to over 250 schools in several membership categories, including full membership for all accredited programs in the United States and government-sanctioned schools in Canada, candidate membership for schools seeking accreditation, and affiliate membership for schools for two-year and international programs. Through these schools, over 5,000 architecture faculty are represented. In addition, over 500 supporting members composed of architecture firms, product associations and individuals add to the breadth of interest and support of ACSA goals. The association maintains a variety of activities that influence, communicate, and record important issues. Such endeavors include scholarly meetings, workshops, publications, awards and competition programs, support for architectural research, policy development, and liaison with allied organizations. www.acsa-arch.org